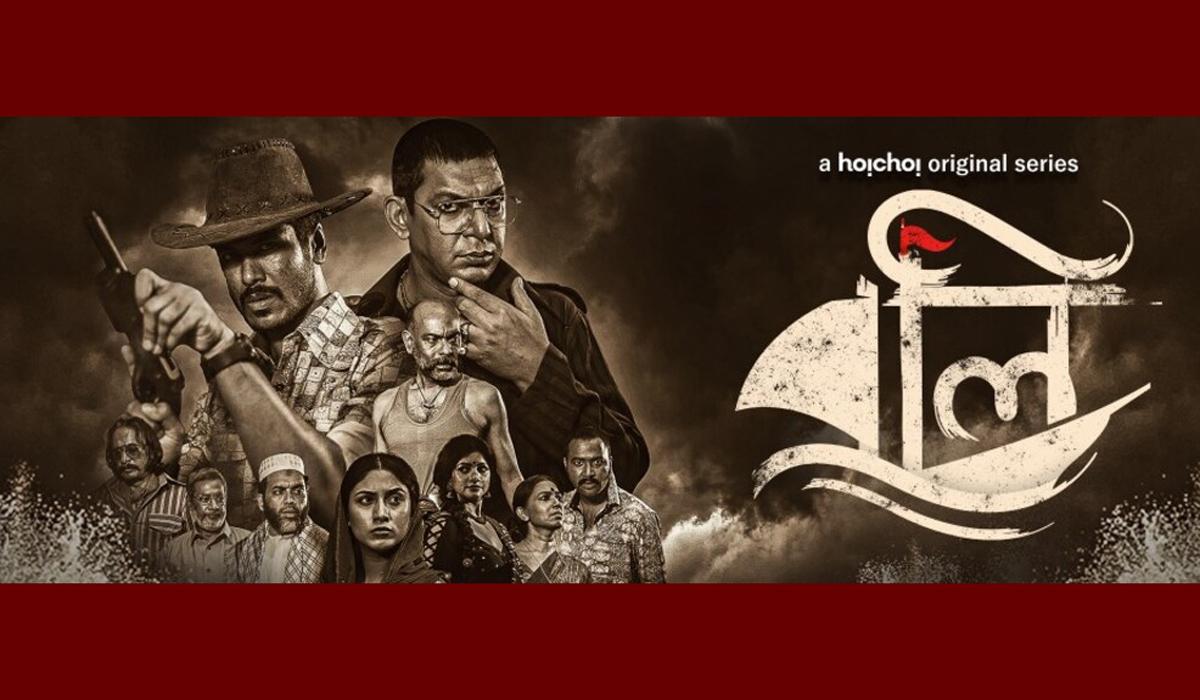 ‘Boli’, Hoichoi TV’s latest series from Bangladesh, is a twist in the legendary Persian tale of ‘Rustom And Sohrab’. Crime lord Sohrab (Chanchal Chowdhury) rules the island of Cheradiya with a brutal hand. Lawlessness thrives, and Sohrab’s guns and gunmen do all the talking. Into this wildworld lands an injured stranger (Shohel Rana), who’s lost his memory. The local brothel inmates nurse him back to health and give him the name, Rustom. Will Rustom spell the end of Sohrab’s reign of terror?

Chanchal Chowdhury is simply terrific as the crime lord Sohrab. He brings an evil menace to his character, accentuating his villainy with deliberately drooping eyelids, cruel sneer and diabolical laughter. He is the scene-stealer in practically every frame he features in. Shohel Rana is average as Rustom. His performance as Rustom doesn’t hold a candle to Chanchal Chowdhury’s brilliant method acting. Sohana Saba is arresting as Anarkali. Salauddin Lavlu as Mojid is interesting to watch. Safa Kabir is listless as Ayesha. The rest of the cast is passable.

Boli is an interesting take on the centuries old story of Rustom And Sohrab. Brownie points to the makers for taking up the unique subject to base their narrative on. Boli starts off well – it is engaging and sucks you into the storyline. The writers create a compelling milieu, which, coupled with the constant presence of the stormy Bay Of Bengal rumbling in the background, adds an unnerving quality of foreboding to the narrative.

The setting will remind you of Hoichoi’s recent ‘Mandaar’. But unlike that show, Boli fails to live up to the promise of the first episode. Repetitive sequences that show Rustom grappling with Sohrab’s men, and repeatedly getting beaten up in the process, drag the narrative down. The story goes around in endless circles, making it tedious and boring to watch. Yet, the promise of the drama playing out like Rustom And Sohrab keeps us watching further.

After what seems like ages, the story picks up somewhat in episode 5. But before that, we’re subjected to a half-baked romantic angle between Rustom and Ayesha, the local Imam’s daughter. The girl develops feelings for the guy, and vice versa, with no reason whatsoever. Ayesha is the most uninteresting character to inhabit the Boli universe. Her character is devoid of nuances and bland as sawdust. The writers try to depict her as a poor little motherless girl, but don’t succeed in getting the viewer invested in the character.

Anarkali’s character has more nuance to it than the shoddily-etched character of the female lead, Ayesha. Alas, Anarkali gets bumped off around the middle of the storyline, depriving the remainder of the narrative of the only spunky character it had. Rustom’s character is about as interesting as blank paper. He gets beaten up perpetually, and needs rescuing all the time. To top that, Shohel Rana plays Rustom with a kind of curious disinterest and detachment. Once we lose interest in the rather insipid pair of Rustom and Ayesha, there’s no reviving our interest whatsoever.

Boli uses blood, gore and violence to good effect in the storytelling. However, it is something we’ve seen a gazillion times in scores of movies and shows. With the rise in streaming entertainment, the use of violence in storytelling has become even more pronounced. So has the use of semi-rural settings that are lorded over by crime kingpins. Boli has nothing new to offer by way of treatment or plot devices.

Twists in the tale abound. But they are introduced so uninspiringly, without any fanfare or cinematic flourish, that they fail to make any kind of impact on the viewer. The end is ambiguous and abrupt, giving a feeling of dissatisfaction and annoyance in the viewer.

To sum it up, Boli is a passable watch that could have done with better writing, tighter plot, interesting lead characters, and spirited direction.

Tahsin Rahman’s cinematography is accomplished and alluring. The play of dark and light, shadows and silhouettes, enhances the grey-hued frames. Russell Panna’s editing is effective and does its job. Emon Chowdhury’s background score is a tad over the top in scenes that needed to be more subtle and sombre. Some musical sequences seem to have been inspired by Ramin Djawadi’s iconic score for Game Of Thrones. The title song is pleasing to the ear.

We are hiring: We are looking for part time writers who can create ‘original’ stories. Send your sample story to j[email protected] (Emails without sample articles will not be considered). Freshers can apply.