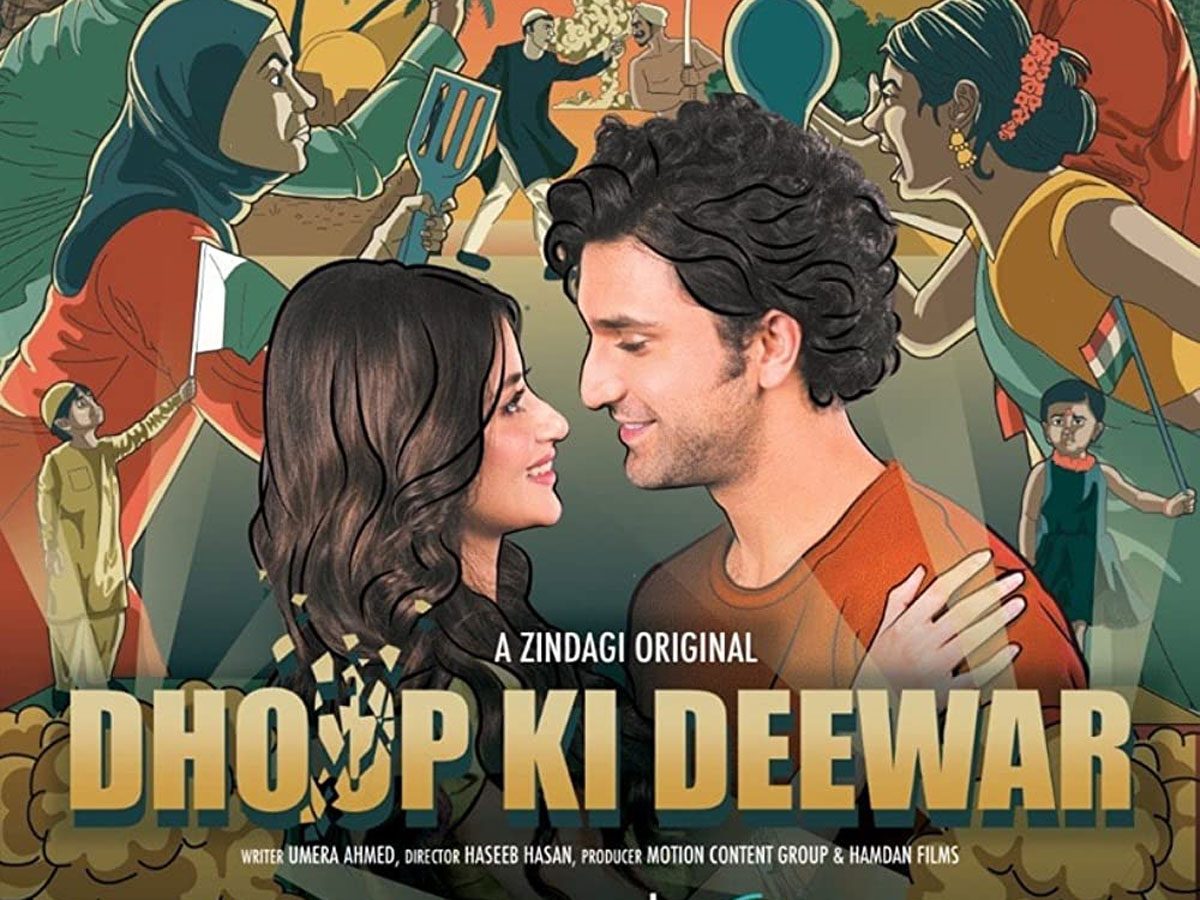 BOTTOM LINE: Goes Where No Indian/Pakistani Filmmaker Has Dared To Go Before

Dhoop Ki Deewar is the latest offering from ZEE5 under its Zindagi brand of shows. It is an anti-war drama commissioned by ZEE5 from Pakistani creators.

The show, through the parallel tracks of Pakistani girl Sara Sher Ali (Sajal Aly) and Indian lad, Vishal Malhotra (Ahad Raza Mir), depicts how the pain of losing loved ones to war is exactly the same on both sides of the border. Both youngsters have just lost their fathers to India-Pakistan skirmishes at the border. The two protagonists start off as bitter enemies via a public spat on social media. Soon they bond over their shared grief, and a beautiful friendship develops.

Dhoop Ki Deewar is directed by Haseeb Hasan and produced by Group M for ZEE5. It has been written by Umera Ahmad, who’s also the writer of the very popular Pakistani show, ‘Zindagi Gulzar Hai‘.

The performances of the primary cast in Dhoop Ki Deewar are very good, save for a few. Sajal Aly and Ahad Raza Mir are the best of the lot in the performance department. Both lend a touching vulnerability and helplessness to their characters, in particular, Ahad Raza Mir’s Vishal. Your heart goes out to him, especially towards the end.

Manzar Sehbai and Samina Ahmed, as Sara’s aged grandparents, convey the grief of their characters really well. Savera Nadeem gives an understated performance as Sara’s freshly widowed mother. Samiya Mumtaz as Vishal’s mother Sunanda, and Zaib Rehman as his grandmother are the only two members of the primary cast that are quite unconvincing as Indian women, and seem like fish out of water throughout the series.

Dhoop Ki Deewar goes where no filmmaker—on either side of the border—has dared to go before. It is an anti-war drama, more importantly pertaining to the constant battles between India and Pakistan. But surprisingly, it is minus the over-the-top jingoism and loud patriotism that are omnipresent elements of such content. It bears no agenda other than a heartfelt appeal for peace and conveying the futility of war.

The grounded performances elevate the story by notches, but the excruciatingly slow pace brings it down somewhat. The leisurely storytelling is more suited to a TV serial than a web show; but then it wouldn’t stream across the globe if it was made for TV.

Slow pace notwithstanding, Dhoop Ki Deewar is a compelling watch owing to the rooted-in-desi-flavour writing, dialogues and storytelling. The sequences often move one to tears. The narrative brings into sharp focus the similarities between the two countries and its people. Patriarchy, nosy and greedy relatives, likes, dislikes, ethos, pathos – India and Pakistan are more similar than we would like to think. And content made in either country hits home in the other, and hard.

The detailing in the series leaves a lot to be desired. Vishal’s school sequences ring all false notes. Here in India, students study in colleges in the higher standards, not schools. The scriptwriters should have paid more attention to the norms prevalent in India. Also, the Pakistani actors fail to get right the tiny nuances of Hindi, thus making the dialogues of the Indian side of characters clunky and clichéd. Especially niggling is the “tereko, mereko” kind of language used by Sunanda, Vishal’s mother. Didn’t anyone tell them it is “tujhe and mujhe” in Hindi, not tereko and mereko. It would have made a vast difference to the authenticity of the show, had they used Indian actors to play the Indian characters. The quality of storytelling would have been enhanced by notches.

To sum it up, Dhoop Ki Deewar is a good watch for lovers of soft and slow Pakistani dramas. It’s a show best avoided for those who love thrillers, fast paced stories and thrill-a-minute action.

The title track of the series, sung by Bilal Saeed and Mehr Tahir, is beautiful and eminently listenable. Bilal Ghouri’s editing is fine. Asif Khan’s cinematography is average – nothing out of the ordinary.

Lack of detailing in the Indian side of things

Only to lovers of slow dramas, especially Pakistani ones