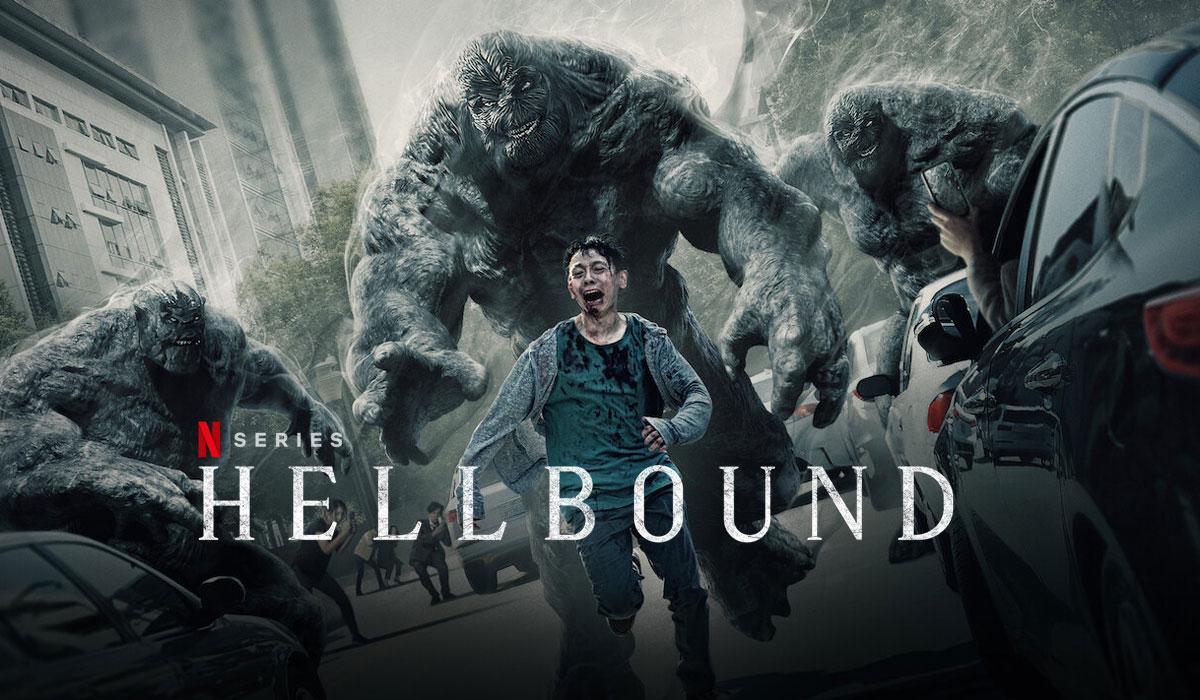 BOTTOM LINE: An Unexpected Intellectual Take On Faith Vs. Truth

Skin N Swear: Some swearing and some skin. And a lot of blood.

Videos start to surface around the globe which features otherworldly beings appearing out of nowhere to condemn certain individuals to hell. While most of the world remains skeptical, a very public appearance of these creatures in the heart of Seoul which leads to a very public execution has everyone scrambling. Investigating this “murder” are detectives Kyung-hoon and Eun-pyo, who find out that this recent death leads back to a new cult called New Truth and their leader, Jeong Jin-soo.

Where to begin? While this web series has a brilliant plot that keeps us engaged throughout, the cast plays a big part in pushing the narrative as well. There is Ik-joon Yang who plays our “supposed” main protagonist, the jaded cop, Kyung-hoon. While the actor does a decent job throughout, it is in his final few scenes from the third episode that makes him standout. A broken man who is left with no choice but to let the world be consumed by a lie and taken over by a cult – all for his daughter. Our “supposed” main antagonist, cult leader Jeong Jin-soo, who is played by Yoo Ah-in is perfectly cast. The actor gives us a nuanced performance of a man who has been afraid of committing a sin for twenty years and spends the rest of his life trying to give meaning to his impending death. When Jin-soo loses his temper during the online interview, the actor manages to dial it back effortlessly, while eventually making us understand why he inadvertently did so. Park Jeong-min who plays a TV producer, Bae Yeong-jae also has to play a character who goes through a rollercoaster of emotions in 12 hours. First he watches his colleague get dragged to hell, then an unknown group of people take over the “death scene”. He then finds out that his newborn child has been marked for death. This requires some impressive acting – and that is what Jeong-min gives us.

However, Kim Hyun-joo, who plays the series’ actual (and surprising) lead protagonist, lawyer Min Hye-jin, gives the best performance among the lot. While this character, like all other characters, has been written well, Hyun-woo brings a gravitas to Hye-jin that is matched by no other. The actress has to play the most complex character on screen – a persona who had to eventually become a South Korean Sarah Connor (without the guns and the muscles, unfortunately).

Again, where to begin? Should we talk about the overall premise of the film – a random supernatural creature appears out of nowhere, predicting the day you will be sent to hell? Or how one man decided to make “order” out of these random deaths and tries to recreate the world in his image? Or we can even talk about one of the biggest talking points of the show – blindly following fanatical faith vs. trying to understand a complex, phenomenal truth. The highly complex arcs and backstories that nearly every character has is another plus for this web series. Pretty much every episode on this show can have a video essay dedicated to it. The six episodes are well made and seamlessly get us through two different timelines – without creating any lag in the web series’ overall tempo. We can even talk about the final bittersweet ending, with Hye-jin and the baby driving into the night, not knowing what the world has now become.

Of course, there are some problems with the series, similar to every other show. There are some small plot holes in the series, like why did Song So-hyun go to the New Truth for guidance regarding her baby? Sure, So-hyun is vulnerable and is going through a crisis of faith herself, right after giving birth, but the fact that her husband didn’t talk to her beforehand about this is a dumb plot hole. That sequence seems to be added in Hellbound only for one reason – New Truth knows about the existence of a “Hellbound Newborn”. Also the final cliffhanger where Park jung-ja returns to life seems unnecessary. Even if it may be part of the main plot, the bittersweet ending which shows Hye-jin sitting in the back of a taxi with the baby, wondering what a new world is going to look like – loses its impact. And another thing many people would have noticed is the CGI. While it is okay, it could easily have been better, had Netflix decided to seriously invest some cash into the series.

Still, the aforementioned “problems” are mostly nitpickings. The series is a serious must-watch that might even surpass Squid Game in popularity. While Squid Game makes people think about the wealth disparity, Hellbound makes people think about religious fanaticism and how it can easily distort the truth. And for this, Sang-ho Yeon has to be commended for his brilliant screenplay. While the show brings in religious elements such as angels, demons and hell – the story actually treats the “decree phenomenon” as an unexplainable, natural disaster which happens at random. A novel concept, especially people can easily become the “Roman mob” and follow faith leaders easily, because of “irrefutable proof”.

And this is not counting the complex characters that are introduced on the show with such rich backgrounds. We already know about the aforementioned Kyung-hoon, Jin-soo, Yeong-jae, Hye-jin and So-hyun, but there are other brilliantly written characters such as Jung-ja, Chairman Kim Jeong-chil, Gong Hyeong-jun, Jin Hee-jung, Deacon Yuji and (surprisingly) the Arrow-head streamer. Each character has a rich background and needed to be perfectly cast – which they were. While the fates of Jung-ja, Hyeong-jun and the streamer were kind of expected – their actors gave these characters such contrasting complex personalities that each of them was memorable.

While there are many things we can touch upon and should talk more about, overall, Hellbound is a must-watch South Korean series that keeps us glued to our seats till the final minute. While the final cliffhanger does off put a few established elements from the show; the story, characters and the ending makes watching the whole series worth it.

As we mentioned earlier, Jung-ja, Gong Hyeong-jun, Jin Hee-jung, Deacon Yuji and the Arrow-head streamer are all memorable characters with their own backstories. They were made interesting thanks to the actors who portrayed them on screen – Kim Shin-rock, Im Hyeong-guk, Lee Re, Ryu Gyeong-soo and Kim do-yoon respectively. These actors (as mentioned above) were perfectly cast and make Hellbound much more interesting.

While the music and the CGI are not very memorable, the direction and writing by Sang-ho Yeon is. His editing department also deserves a mention and the creator behind the title track also does a good job.

Yes. A very unique premise that will keep you on the edge of your seats