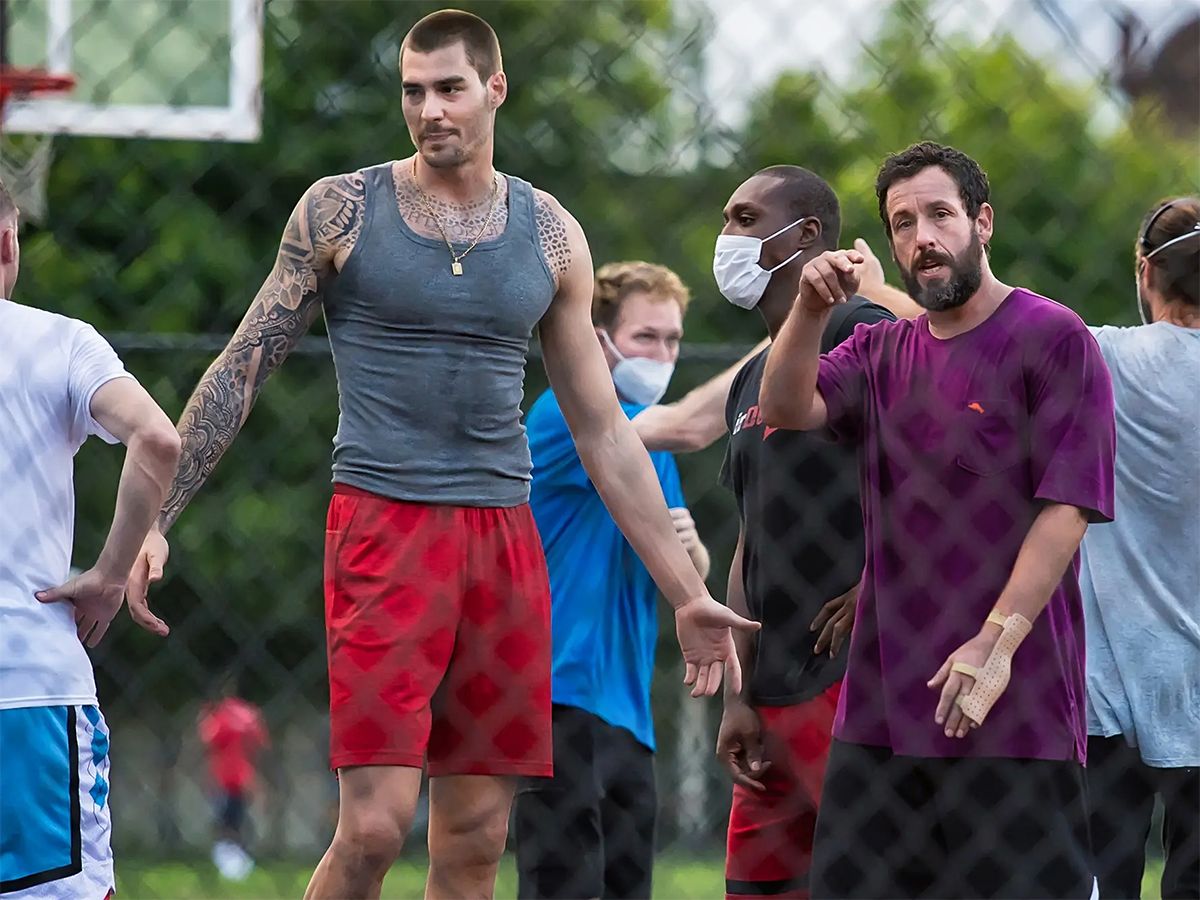 BOTTOM LINE: Entertaining Sports Drama That Gives You All The Feels

‘Hustle’ on Netflix centres on Stanley Sugerman (Adam Sandler), an international scout for the ‘Philadelphia 76ers’ basketball team, his desire to become an NBA coach, and his hunt for “the missing piece” – a basketball talent that will help the team win the championship. In Spain to check out another talent, Sugerman chances upon Bo Cruz (Juancho Hernangómez), a tall, lanky construction worker with a prodigious talent for basketball. However, the only basketball that Bo Cruz plays is some after-work hustling to earn quick money in basketball bets.

Sugerman convinces Bo Cruz to come to Philadelphia with him to try his luck at the NBA draft. Ditched by Vince (Ben Foster), the owner of the Sixers, Stanley takes it upon himself to get Bo a chance at the NBA draft independently. Along the way, he forges a bond for life with the reticent basketball prodigy.

Hustle is written by Taylor Materne and Will Fetters, and directed by Jeremiah Zagar. It is produced by LeBron James and Adam Sandler.

Adam Sandler in Hustle proves yet again why filmmakers must give him more shots at essaying intense, persuasive roles such as that of Stanley Sugerman. While he’s entertaining for sure in all the comedy films that he does with astonishing regularity, when it comes to drama – emotional and otherwise – he’s formidable af, and a different beast altogether. Adam Sandler keeps the viewer’s attention firmly on him in Hustle, while he pulls off some of the best acting of his career. In short, he’s simply terrific.

The same goes for real-life Minnesota Timberwolves star Anthony Edwards, who plays antagonist Kermit Wilts in the film. He’s excellent in the film, especially the sledging bits. Both first-time actors evoke just the right sentiments in audiences. We root for Bo and we hate Kermit with all our heart. Proves how efficiently both NBA basketballers have pulled off their roles.

Queen Latifah as Sugerman’s supportive wife Teresa is a delight to watch on screen. Ben Foster as the unlikeable Vince ensures with his performance that audiences don’t like him much, only in the movie though. Jordan Hull is cute as Stanley’s teenaged daughter.

On the face of it, Hustle is a classic ‘triumph of the underdog’ story, with a predictable trajectory to its plot. But delve a little deeper into the film, and you get acquainted with and begin to appreciate all that makes Hustle such an entertaining and heartwarming watch.

The pace of the film is just perfect. Hustle moves at an agreeable pace in the lighter, less intense parts, taking on a thrilling momentum in the scenes on the basketball court. The effect is both pleasing and satisfying all at once.

Some of the best parts in the film are the training sequences between Stanley and Bo. Almost every sports drama unfailingly devotes realms of celluloid to scenes where the mentor pushes the protégé to drive themselves further – faster, higher, stronger. In Hustle, the training montages are not just that. They are all heart. A witty one-liner here; a humorous exchange there; and we’re all in. Moreover, it’s not just that the tenor of the exchanges between Stanley and Bo gives you all the feels; it’s also that the training scenes showcased in the film are as authentic as can be. It’s how star basketballers train to dribble, pass, aim, dunk, shoot, pull off a neat layup shot, and more, in real life. And it’s a treat to watch.

And of course, the basketball in the movie is easily its best part. The sequences where Kermit heckles Bo are excellent; and when Bo finally gets the better of Kermit – you almost whoop with delight. That said, a glaring drawback in Hustle is its propensity to play safe. Problems arise, but get resolved quickly and easily – no sweat. At no point in the film does the viewer feel a sense of urgency or the dread of “what if….”. You know things will work out for Stanley Sugerman and Bo Cruz, and you sit back relaxed, never drawn to the edge of your seat even for a nanosecond.

Lastly, Hustle is so full of cameos from real-life NBA luminaries, and past and current players, that one begins to lose count of all the stars that make an appearance in the film. There’s current Sixers head coach Doc Rivers and assistant coach Dave Joerger, Hall of Fame player Julius ‘Dr. J’ Erving, former player and current NBA analyst Kenny ‘The Jet’ Smith, German NBA star Dirk Nowitzki, Orlando Magic’s Moritz Wagner (who plays Haas), Milwaukee Bucks’ Khris Middleton, Miami Heat’s Kyle Lowry, two-time NBA All-Star Trae Young, Dallas Mavericks’ Boban Marjanović, and dozens of others. Almost every scene in Hustle features some or the other NBA star. The cameos add unmatchable authenticity to the film, and are a lovely touch.

Dan Deacon’s musical score for Hustle hits just the right notes. The soundtrack is peppy, upbeat, fun and uplifting all at once. It features several great numbers that perfectly complement the theme and setting of the film. Zak Mulligan’s cinematography is good, especially the fast-paced scenes on the basketball court, and the terrific training montages.

The terrific casting and the superb cameos

The overall treatment of the story The deft direction