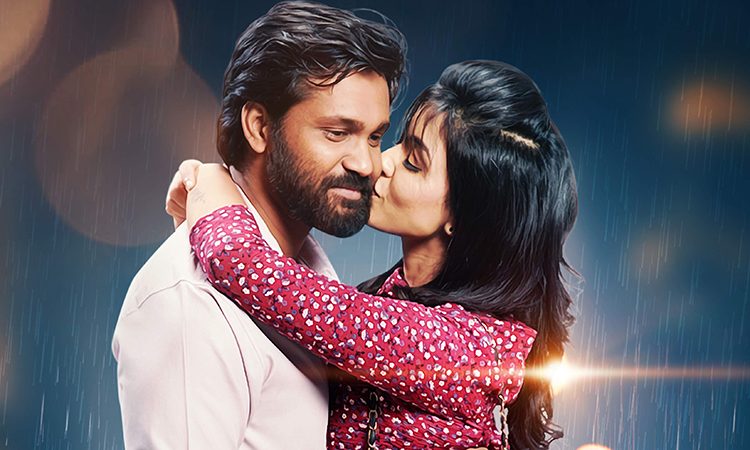 Vaishu and Aishu are school-going twin sisters biding their time in a town known for its stunning landscapes and greenery. While the mother is conspicuous by her absence, their strict yet caring father Shiva fends the kids, manages their day-to-day existence with reasonable ease. But for the little academic concerns at school, fights between the sisters at home, life is proceeding without any major hassles for the father-daughter trio. Tragedy strikes their household when one of the pivotal characters is severely injured in an accident when we’re introduced to Shiva’s past and his love life with Ramya. How Shiva tolerates the highs and lows of a tumultuous relationship and becomes a responsible, committed husband and later a dutiful father is Igloo for you. 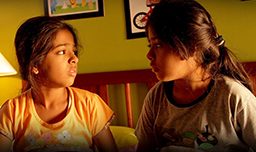 Amjad Khan as Shiva isn’t the most conventionally good-looking heroes you would find even for a digital film. But that’s what works with his casting – he looks like anyone among us, dealing with the financial pressures and commitments of middle-class life but would go to any extent to guard his beloved. There’s no forced machismo to the character and Amjad’s simplicity, effortlessness takes us through the role quite well. Anju Kurien as Ramya too has a very difficult job to do, make us relate with her character without being sympathetic. The director’s measured approach and her fine responses create a wonderful impact in the process.

It is quite apparent that Bharath Mohan, the director of the film has borrowed traces of Arjun Reddy’s premise in Igloo – especially with the anger-management issues of its leading protagonist Shiva, the clash with his in-laws and the pre-marital pregnancy of his girlfriend. However, his treatment is quite original and mature. The storyteller makes Igloo a hard-hitting tale of suffering – right from how the victim of a deadly disease deals with pain and how it affects her near and dear. Intertwining issues like difficulties in pregnancy, of the mood-swings of a patient who knows she doesn’t have many days left in her kitty, the loneliness in single-parenting among many, the director weaves in a poignant that’s real and never stoops down to unnecessary melodrama.

When a young mother who’s suffering from blood cancer doesn’t at all wish to see her newborn children and says, ‘I don’t want to see them and have unnecessary hopes to live further, which is practically not possible,’ it shows how a cancer patient doesn’t want to end her life with regret or baggage. She ticks off things to do from her bucket list (staying in an Igloo is one among them), doesn’t want to hear any words of sympathy from anyone and nearly tries to take a shot of morphine to alleviate herself from the chemo-pains. The tone is very practical and emotional at the same time. 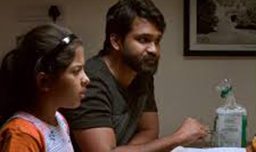 Even with the clash between the in-laws and Shiva, the director brings an innate ‘middle class’ quality to the treatment. The father doesn’t agree upon the ‘Rs 40000’ salary of the hero, has a problem with his orphaned background and his sister staying in the same house as the couple. Though the lead character has unpredictable mood-swings and anger issues, it’s not completely unjustified altogether. There’s an upright side to him too. His transformation from an angry boyfriend to a tolerant husband to a responsible father comes across quite neatly. Most characters in the film, big or small in length, are extremely relatable.

Though the director sets up a nice premise to tell the love story of Shiva and Ramya, the ending feels slightly sudden and underwhelming. For someone who’s invested in the characters of the twin-sisters, they only seem like props for the narration of the love story. There are relative newcomers in pivotal roles, who still show the composure of seasoned actors to do justice to the story. The realistic treatment with flexible doses of humour are the primary strengths of Igloo. There are limitations in the canvas and the scale of the storytelling maybe, but they pale out in front of the gritty drama you get to see.

Jeeva Ravi, Mathew Verghese get brief yet well-defined roles. The child-actors Anita and Arohi Radhakrishnan (who were previously seen in Tumbaad) are sweetest-spot of the film. They are innocent but no pushovers, are united but will fight for their wants and most importantly right for their age – the children are beautiful as they are without any traces of underplaying or overdoing their parts.

Music doesn’t have a big-time impact on the film, the songs are far few and between the sequence and the background score is reasonable if not staggering. The setting of a town dominated by a green corridor is explored well by the cinematographer. Probably, the film deserved a better production standard and scale to tell its story. The CG portions in the film are laughable, to say the least. The writing is clean and sincere without any forced cinematic liberties.