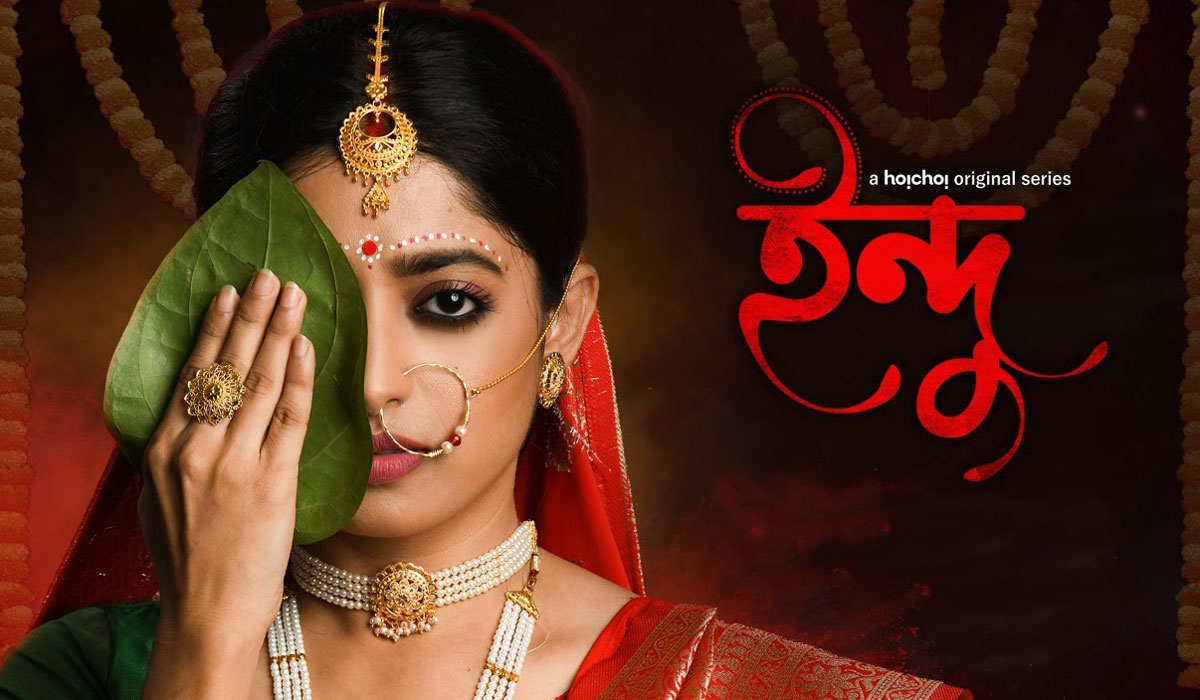 Hoichoi TV’s new series ‘Indu’ is a suspense drama, set in the backdrop of typical patriarchal Bengali households.
Indu (Ishaa Saha), already traumatised by the elopement of her would-be groom with her younger sister Milli, is shooed into a hasty marriage with Saugato Dasgupta (Chandraniv Mukhopadhyay). Strange happenings from her wedding day itself make it clear to her that someone doesn’t want her marriage to Saugato to flourish. Particularly enigmatic are her brother-in-law, Sujato (Suhotra Mukhopadhyay) and his estranged wife, Laboni (Manali De). As the strange incidents gradually become even more eerie, Indu is determined to get to the bottom of the mystery.
Indu is written and produced by Sahana Dutta, and helmed by Sayantan Ghoshal.

Ishaa Saha is flawless as Indu. She doesn’t miss a beat while portraying the intelligent and strong-willed young woman, pulling it off with ease. But the real star of Indu is Suhotra Mukhopadhyay as the inscrutable Sujato. The actor, with his effortlessly shifting expressions and enigmatic body language, keeps viewers guessing till the very end whether he is victim or the villain of the piece.
Manali De only appears in the finale episode, and that too, for a few short sequences. Manasi Sinha, Chandraniv Mukhopadhyay, Payel De, Mimi Dutta and Judhajit Sarkar lend suitable support to the narrative.

On the surface, Indu is a suspense drama, with a murder, several attempts to murder, an unhinged woman and a mystery woman thrown into the mix. But scratch beneath the surface, and the stench of misogyny and patriarchy pervades the plot in every scene. A mistimed glance, an accidental stumble, or even a harmless chat, is enough to convince the men in the narrative that the woman in question is characterless—and worse—a ‘whore’. The holier-than-thou men then proceed to treat her shoddily, even going to the extent of driving a good woman out of her marital home.
Women in the Indu universe are either looked upon with suspicion or beaten into submission with disturbing regularity. That the titular character stands her ground in the face of horrendous taunts and character aspersions is the one positive element in the entire mess. But then maybe that too is a reflection of what being a woman in Indian society entails. After all, Indian women are conditioned to live with and stand their ground against patriarchy in daily life.
That aside, the suspense part of Indu is not as gripping as one would have liked. It falls more in the overdrawn, over-stretched category, with plot points being repeated several times, as if to hammer them into our brains. The pace of the show is also on the slower side, compelling the viewer to hit the fast forward button several times in the runtime. The performances of the two main protagonists, Ishaa Saha and Suhotra Mukhopadhyay, lift the narrative out of the tedium it threatens to sink into time and again. The world-building in the show is one of its highlights.
The eight-episode series ends with tons of unresolved issues, making season 2 of the show a certainty. There seems to be an angle of sexual abuse to Khushi’s (Payal De) story. She is the unhinged sister of Saugato and Sujato. The reason for her current mental state should be revealed in the next season, if there is one.
All said and done, ‘Indu’ is a passable show that could have done with some speeding up.

Binit Ranjan Moitra manages to infuse enigma into the narrative, with his haunting background score. Sudipta Majumdar’s cinematography elevates the suspense element of the story beautifully.

Slow-paced
Suspense build-up is not that great

Watch only if slow-paced dramas are your thing