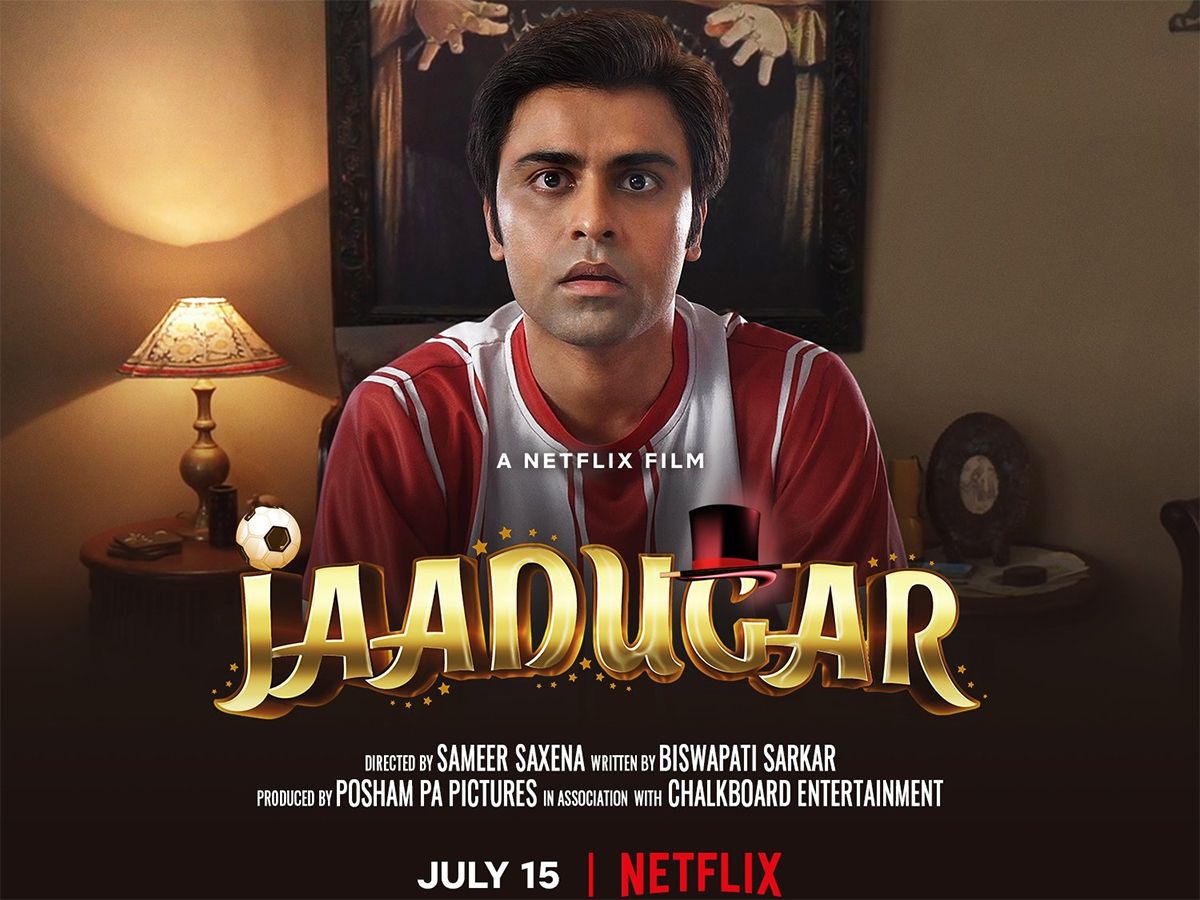 Netflix’s latest original film ‘Jaadugar’ is set in the backdrop of small-town Neemuch, a football-crazy town in Madhya Pradesh. Meenu’s (Jitendra Kumar) father was the football hero in the town’s neighbourhood football tournament. His parents’ untimely death on the way to a football match leads to Meenu hating the game itself. The orphaned boy finds succour in magic instead, and grows up to be an aspiring magician. Meenu falls in love with Dr. Disha (Arushi Sharma), whose father (Manoj Joshi) decrees that Meenu must win the local football tournament with his team, Adarsh Nagar Sikandars, to win the hand of his love, Disha.

Jaadugar is directed by Sameer Saxena and written by Biswapati Sarkar.

Jaadugar is easily the worst performance by supremely talented actor Jitendra Kumar – and through no fault of his. It is the badly-written, extremely toxic character of Meenu to blame for that. Meenu must be the worst character ever to lead a top-billed Netflix film like Jaadugar. Not even Jitendra Kumar can save the character from descending into a downward spiral of mediocrity. Most of the time, Kumar looks out of sorts and distinctly uncomfortable in Jaadugar, clearly implying his unease with the character he’s essaying.

Manoj Joshi and Arushi Sharma are about average in their given roles. Jaaved Jaaferi is the only good thing about Jaadugar. He’s eminently watchable as Meenu’s uncle and coach of the Adarsh Nagar football team. Oh, and the supporting cast that plays the members of the ragtag Adarsh Nagar Sikandars does well too.

Jaadugar is the worst thing to come out of Netflix’s India stables ever. With duds like Mrs Serial Killer and Bard Of Blood to its name, that is indeed saying a lot. It also gives a clue of the sheer mediocrity that is Jaadugar.

Nothing about the movie is good – not the performances, not the music or camerawork, not the direction, and certainly not the writing. The writing is, in fact, the worst part of the movie. It is such a damp squib that it starts to get on one’s nerves after only ten minutes into the film. The character of Meenu is creepy, toxic and astonishingly selfish. All he thinks about is getting hitched to a girl who hardly seems interested in him. He’s even okay with sacrificing his dead father’s unfulfilled dream and his team’s hard-earned victories to achieve his questionable end. What’s more, there is not an iota of chemistry between the male and female leads, which makes all the contrived drama seem like an exercise in futility.

The magic angle in Jaadugar is a non-starter from the word go. It seems only to have been added to the storyline to set it apart from the gazillion sports dramas masquerading as coming-of-age sagas in film-land. The ruse fails to work, though. Jaadugar is as predictable and garden-variety as every other underdog/coming-of-age/slice-of-life film there is, with a plot hackneyed enough to make one hit the fast-forward button with escalating frequency.  The humour in the film is non-existent. None of the supposedly funny dialogues elicit laughter. The gags are lame, while the punchlines lack punch. The dialogues are clunky, with a cringe quotient that can put Humshakals to shame. Jaadugar’s script/screenplay is so terrible that it makes even Housefull 4 seem like a work of art.

Jaadugar is a poorly conceived, shabbily written piece of work that does nothing for its viewers. Writing and story aside, the quality of production is nothing great either. In fact, to be utterly honest, it is quite poor. It is hard to believe that Jaadugar comes from the same talents that gave us timeless gems such as ‘Yeh Meri Family’ and ‘Kota Factory’.

To sum it up, Jaadugar is supposedly a magic and sports comedy drama, with zilch magic or comedy. Stay away from it. If you do decide to watch it, don’t say we didn’t warn you.

Nilotpal Bora’s score for Jaadugar does nothing to enhance the storytelling. On the contrary, it is an intrusion that could simply have been done away with. The songs are irritating and pop up at odd times in the narrative. The weirdest is the one that comes up in the climax, which the entire gang latches on to lustily. The background score is downright irritating. The composer aims for rousing but ends up with phony and contrived instead. The editing and camerawork in Jaadugar are average.

Also, everything else about the film