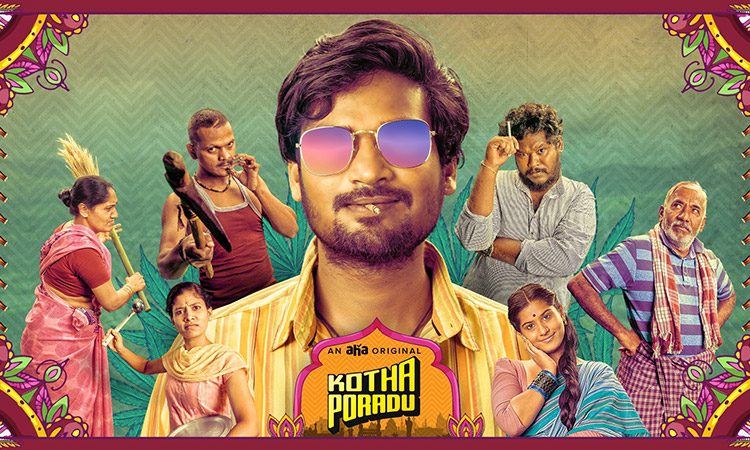 Raju is a wastrel who wiles away his time with his good-for-nothing friends, boozing around his hometown PK Palli, much to the concern of his parents. His father Istharayya is no less colourful a character – a small-time sari seller, a big-time flirt who has multiple wives and resorts to taking small-time loans from his near and dear to run his family (families). Raju falls for the daughter of a kirana-shop owner Nagma, only to realise that she is due to marry a man from another town shortly. Raju’s feud with a notorious goon Nethi Rajesh turns for the worse as his father dies suddenly. Will he make up for his father’s debts and find a footing in Hyderabad? 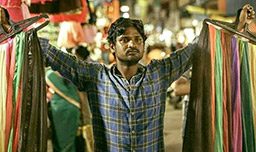 Anvesh Michael, after an impressive supporting act in Mallesham, proves his ease in front of the camera yet again. As a hot-blooded, wayward youngster who’s yet to find a purpose to his life, the actor slips into the skin of Raju with his quirky histrionics and adds a lot of flavour to his portrayal. But the real find in Kotha Poradu is Sudhakar Reddy as Istharayya – he proves to be a natural on the screen, displaying his weakness for women, presenting the laidback persona of his flawed character with much charm.

Thanmai Bolt doesn’t have much to do as Nagma, while Jagadeesh Prathap cast in the role of Mallesh shines with his uncanny comic timing. Raj Tirandasu is another talent to watch out for, in this series. Playing a shady small-time goon in a village Nethi Rajesh, his unusual appearance and casual aggression are assets to his portrayal. Most actors in the show feel like they belong to the town where it is shot amid.

The success and rise in the popularity of stories, songs and literature unique to Telangana has encouraged filmmakers to explore more tales from the heartland of the State and Kotha Poradu is one such show that gets its intentions and execution right. Helmed by Anvesh Michael (who also plays the lead character Raju), Kotha Poradu remains very true to the setting of its region. Right from the story to the characters, their conversations and the rustic atmosphere of a sleepy town, everything about this show is raw for a good reason.

The show, more than its contrived storyline, works for its entertainment quotient. It takes you to the rural panchayats, the narrow-roomed households, the local markets, the convenient hangout spots, the toddy collector, the festival celebrations and rings in a sense of nostalgia for those who have their heart in the countryside. The wit, the sarcasm and the straightforwardness in the air is something you no longer find in cushioned metropolitans, the series proves.

Patriarchy still rules the roost here, women are restricted to their houses while men do the fieldwork. A panchayat also gives out a verdict where a girl is forced to marry a man who promised love and cheats her later. Even though you appreciate the director’s ability to weave in a gamut of interesting characters and scores well in the depiction of the rural backdrop, Kotha Poradu could have done with a more concrete storyline. The series is too indulgent in focusing on depicting the wayward ways of the protagonist in multiple situations. 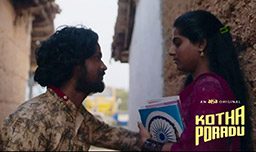 Kotha Poradu works despite its limitations because of its racy screenplay. The episodes are crisply edited, the characters are established quickly. Expectedly, the series is high on profanities but the purpose behind it is never questionable. The series ends on an interesting note keeping viewers intrigued about Raju’s travails in Hyderabad. Aha has commenced its OTT platform on a strong note with this interesting show.

The sound designer Nagarjun Thallapalli, the composer Smaran deserve a lion’s share of the credit that the show would ideally receive – for preserving the sounds of the region, not trying to ‘sophisticate’/dilute it by any means and trusting its original texture. The folksy soundscape adds so richly to the viewing experience. The cinematography offers you a genuine pulse of the life by the countryside and so does the witty dialogue (though it goes overboard on expletives).