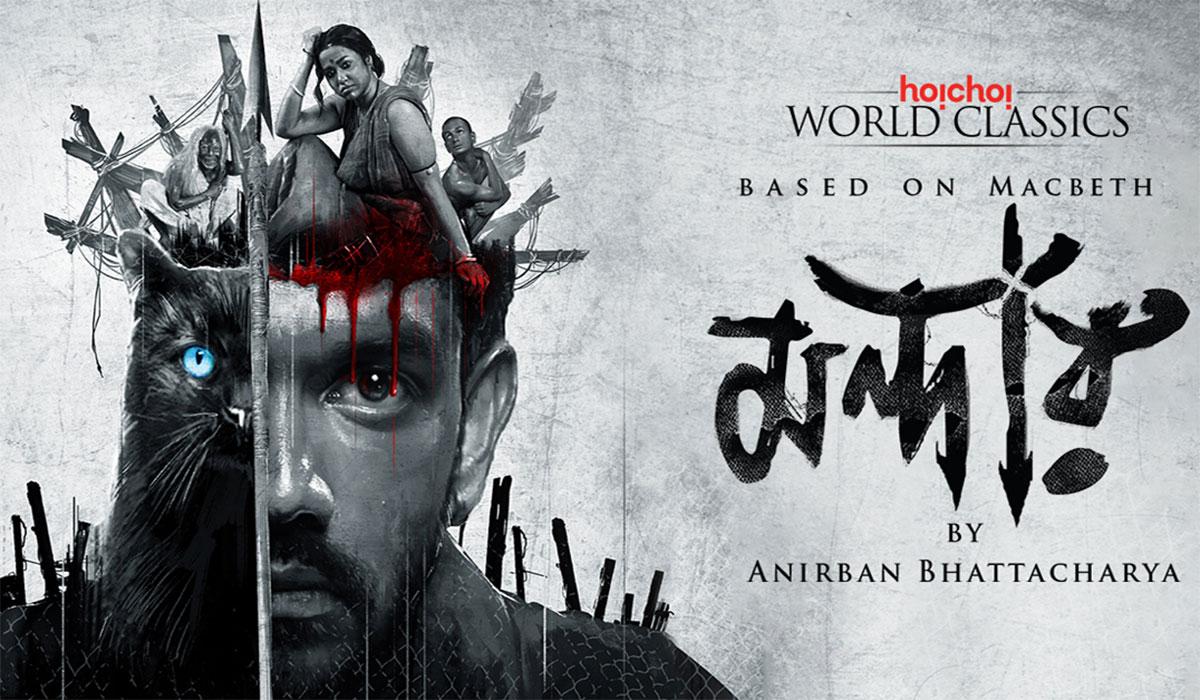 ‘Mandaar‘ is Hoichoi TV’s first show under its newly minted category ‘World Cinema Classics’. In keeping with the tag, the series is an adaptation of Shakespeare’s ‘Macbeth’, but infused with an overwhelming colloquial flavour.

Mandaar (Debasish Mondal) is a henchman for local magnate Dablu Bhai (Debesh Roy Choudhury). A fluke prophecy sparks greed and ambition in him and his wife Laili (Sohini Sarkar), spurring him on the path of murder and madness.

Debasish Mondal is sublimely perfect as Mandaar. He brings the required intensity to the role, first as a wimpy yes-man, and later, as a man possessed and ablaze by the all-consuming flame of greed and lust searing through his loins. Terrific casting and performance, this! Sohini Sarkar is equally arresting as the exploited Laili, who makes an impassioned play the minute she realises the power that is within reach. Anirban Bhattacharya is frisky and playful as the corrupt and insatiable cop, with a lusty appetite for both – food and an easy lay. The way this man transforms himself with every role is riveting.

Sajal Mondal is superb as Mojnu, the equivalent of one of the three witches in Macbeth. He plays a gnarled old woman, which, him being a man, is a spectacular transformation. The rest of the cast performs adequately.

Anirban Bhattacharya has made a resounding directorial debut with Mandaar. The actor, whose heart, it seems, resides in directing, has summoned all of his sensibilities and knowledge in the art of storytelling – cinema, theatre, OTT, Shakespeare, noir, and what have you, to conjure this ground-breaking (at least for Bengali entertainment) piece of work.

The film-making is exquisite, the camera angles outrageously inventive. Some of the shots leave you wondering at what you just saw. The storytelling leaves you with myriad feelings at different times, but the overwhelming feeling is always one of disgust. Immorality lurks in every frame of Mandaar; and vileness resides in every character. No character is above it, and no vile act is below anyone. Be it Bonka Da (Banquo in Macbeth) Madan (Macduff), or even the trio of oddities, Mojnu, Pedo and the cat Kala, standing in for the three witches. Inspired touch there by the writers to replace witch number 3 in the source material with a cat in this atmospheric adaptation.

Mandaar is a difficult watch for sure. We’ll stick our neck out to say that Anirban Bhattacharya‘s reimagining of Macbeth is even darker and more forbidding than Shakespeare’s original. And that—is saying quite a lot. Several sequences in the series haunt the viewer for long afterwards – one shot with cockroaches keeps playing in my mind’s eye on loop – I wish I hadn’t seen it. And yet, the series is compelling enough that we can’t seem to tear our eyes away from the screen.

That said, the narrative is a tad lengthy and draggy in the middle episodes, and rushed in the final one. Screenplay writer Pratik Dutta could have cut out the flab for a leaner, meaner final product. This is the only criticism we can levy against Mandaar. It is perfect otherwise.

DOP Soumik Haldar has done a fantastic job with the camera. As we’ve mentioned elsewhere, the camera angles are wildly inventive, be it all-encompassing long shots, harsh closeups, ubiquitous drone shots and more. The stark landscape lends itself well to the cinematography and narrative, allowing Haldar to elevate the storytelling by notches. The landscape is a character in itself, undulating in mysterious ways, along with the story.

Subhadeep Guha’s background score is superb. It is neither raucous, unlike some recent OTT content, nor too muted. It is just right, giving the perfect soundscape to heighten the sense of eerie. Editor Sanglap Bhowmik lends commendable support to the production with flawless editing.

Somnath Kundu’s makeup is outstanding. Mojnu and Pedo are both a sight to behold. Pedo has some disgustingly icky stuff sticking out of his nose all the time – nice touch from the makeup department – it makes the man even more repulsive to the eye.

An overall polished product, even though the effect is just the opposite

A bit draggy and stretched in the middle episodes