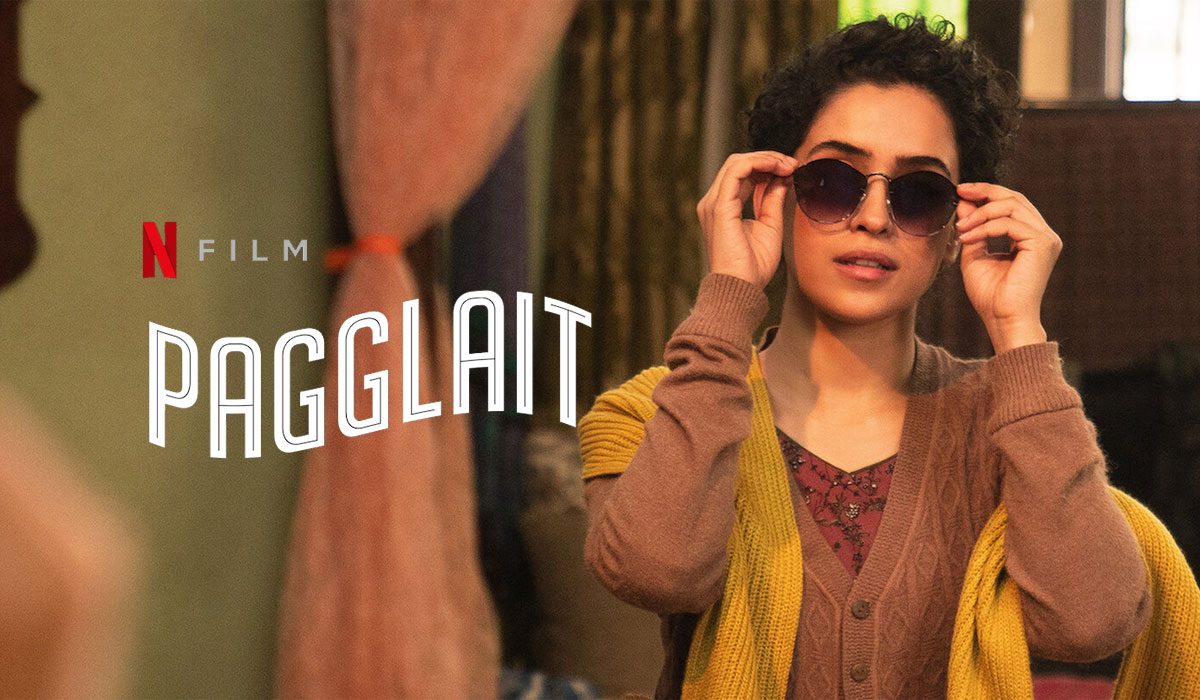 BOTTOM LINE: Refreshingly Different Tale With A Sting In The Tail

Pagglait is a refreshingly different offering from Netflix. Written and directed by Umesh Bist, it tells the story of Sandhya (Sanya Malhotra), who has just lost her husband of five months. While the dead man Astik’s parents Shivendra and Usha Giri (Ashutosh Rana, Sheeba Chaddha) are drowning in sorrow, Sandhya, curiously, feels no grief.

The entire story unravels in a span of thirteen days – the pre-defined grieving period in Hindu tradition. In these thirteen days, as the extended family – of assorted maternal and paternal uncles, aunts and sundry other relatives – prepares the departed soul for a new life, it is Sandhya (the titular Pagglait) who gains a new perspective on life.

Sanya Malhotra is pitch perfect as the supposedly grieving young widow who sheds nary a tear for her departed husband. Her calm, understated performance, not to say, utterly natural delivery of dialogue, elevates the character notches above your everyday, garden-variety female protagonist.

Ashutosh Rana, who’s appeared in predominantly negative roles in his recent outings, renders a delicate though impactful portrayal of a bereaved father, saddled with the added burden of managing the precarious financial situation of his home. Likewise, Sheeba Chadhha is flawlessly perfect in her role. Raghubir Yadav brings to life a character of a certain vintage. As a perpetually hassled conservative man, who cuts down everyone to size courtesy his position as the family elder, he is a riot.

Sayani Gupta, though credited with a special appearance, steals the show with a blemishless performance. The rest of the expansive ensemble cast is outstanding too. Jameel Khan, Shruti Sharma, Rajesh Tailang, Meghana Malik, Aasif Khan, Shareeb Hashmi, Ananya Khare, Yamini Singh, Natasha Rastogi, not to forget, Saroj Singh as the adorable though senile ‘dadi’ – every actor has delivered as required.

Pagglait is a film cut from the same cloth as a ‘Queen’ or a ‘Cocktail’ or a ‘Piku’, or come to think of it, a ‘Tamasha’. Though the plot, setting, characters and their circumstances may be different, they are films that leave you with similar, goofy, fuzzy, full-of-warmth feelings – hope, anticipation, and a weird kind of fulfillment – when the credits start to roll.

The film opens with the rhythmic squeaking of springs, and if you’re not watching, you may mistake the sound for….err, squeaking bed springs. Halt your runaway imagination – the squeaks are from the seat of the cycle as a rickshaw-puller heaves and relaxes alternatively while pulling a carriage full of mattresses along Lucknow’s narrow streets. The mattresses are delivered to Shanti Kutir, meant to accommodate the teeming relatives that descend on the home of the bereaved Giri family – ‘Chacha-Chachis’, ‘Bua-Phuphas’, ‘Mausiji’, ‘Tayaji’, and sundry other ‘well-meaning’ relatives. The newly-widowed Sandhya is an aberration in the midst of all the mourning and grieving. She barely feels any sorrow, craves gol-gappe, asks her bemused mother-in-law for a Pepsi instead of tea, and when denied the pleasure, gets it delivered surreptitiously by accommodating neighbour, Parchu (Aasif Sheikh). 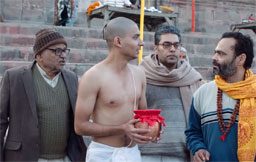 Her mother is as baffled by her daughter’s behaviour as her in-laws. As everyone puts it down to PTSD, the truth is something only Sandhya knows. Despite living together as husband and wife, the newlyweds had not been able to develop a meaningful relationship in the ultra-short 5-month-span they had known each other for. She even confesses to her friend Nazia that while she had cried for days together when her cat died, she felt no pain on losing Aastik. Her feeling of detachment grows when she discovers that her dead husband had once upon a time been in love with his colleague Ananya (Sayani Gupta).

This story could be the story of any Indian arranged marriage – a concept unique to South East Asia. Love is an alien word for most Indian youngsters who’re married off as per the whims, fancies and circumstances of their parents, to a partner of the parents’ choosing. This is, in essence, the sum of the story that is Pagglait. That Sandhya chooses to forge her own destiny in the end is but a plot device to add the aforementioned feel-good factor. And to legitimise the title Pagglait – as she tells the serenely smiling dadi – a woman who finally finds her voice and a will to do things her way has always been pronounced ‘Pagglait’ (mad) by society.

Sanya Malhotra is at the peak of her considerable performing abilities, and the role is tailormade for her. Umesh Bist is at his best when he shines his arc-lights on the hijinks of Hindu death rituals. The dialogues are terrific, delivering a sharp stab of sarcasm or a sudden spot of humour that delights as much as it surprises. The thirteen days of mourning play out like a Shakespearian drama, with ample scheming, plotting, gossiping and back-stabbing going on in the background. However, unlike Shakespeare’s tragedies, everything in Pagglait turns out fine in the end. And we end up with that warm, fuzzy feeling in the depths of our heart that tells us — OK, this was a good one! 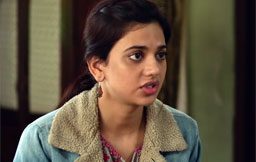 Pagglait marks the Hindi film debut of Arijit Singh as Music Composer. While we much prefer Arijit Singh the singer to Arijit Singh the composer, the musical score of Pagglait is pleasing to the ear, with a potential to grow on you as the years go by. ‘Dil Udd Ja Re’ and ‘Thode Kam Ajnabi’ are soothing to listen to. We did a double take with ‘Phire Faqeera’ – it made us wonder if it was AR Rahman who was the crooner and composer of the number. But no, it is Arijit Singh all the way. Prerna Saigal’s editing is flawless while Rafey Mehmood’s camerawork is lovely.