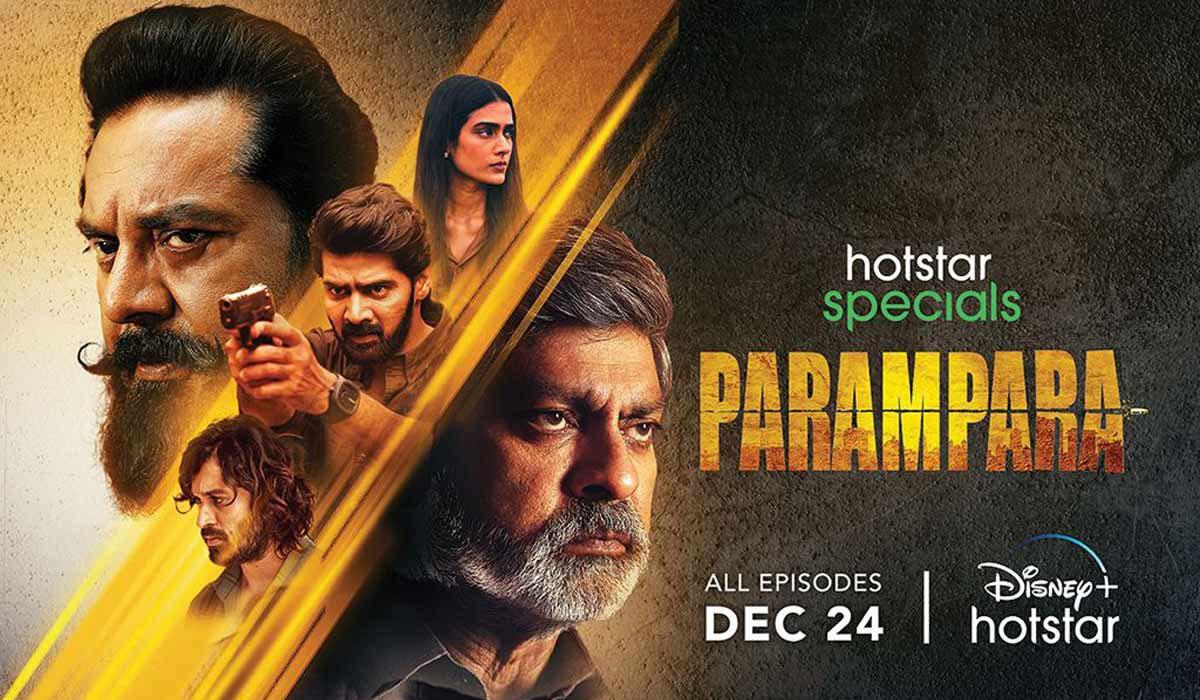 The story of Parampara revolves around the Naidu family headed by Veera Naidu (Murali Mohan). After his demise, Nagendra Naidu takes the mantle and emerges as a powerful personality ruling Vizag city. His elder brother is Mohan Rao (Jagapathi Babu).
Gopi (Naveen Chandra), son of Mohan Rao hates Naidu (Sarath Kumar) from childhood as he had snatched power from his father. It makes him take decisions that go against Naidu’s wishes. After giving a hard thought, Gopi gets a final idea that would bring the downfall of Naidu. What is the idea and how it affects Gopi and the entire family is the series’s core plot.

Naveen Chandra is a perfect fit for the part of Gopi. The characterisation suits him and he delivers the needed with ease. There are different shades to it and he does well. Most of it has Naveen playing the angsty guy, but he is equally good in romantic scenes as well. The best in that track comes with Naina Ganguly during the penultimate episode. In the end, Parampara is a big outing for Naveen Chandra and is carries it adequately.

Krishna Vijay L and Vishwanath Arigela direct Parampara. It is a typical storyline we see in dramas based on power politics, and crime involving powerful families.
The setup for the series is nicely done with the opening episode. The back and forth narrative from an intriguing beginning makes the predictable story look spicier. The grand production values and, the background score registers instantly.
Unfortunately, the narrative goes downhill from that beginning. It is mainly due to the weak handling of the conflict. The issues were visible at the start itself but one overlooks it then due to other dominating factors and the screenplay. However, as more is revealed the problems become more apparent.
The screenplay takes a predictable route for the rest of the narrative for starters. But, the bigger issue is the serial like handling of the whole thing. The narrative lacks the edginess of modern OTT dramas. The direction and the writing gets the most blame. If the amount of effort put on slow-mo shots of various characters were seen in the writing, Parampara might have been much better.
The choices and actions of various characters are utterly predictable. There is no effort to conceal this via the screenplay.
It is only when the track involving Gopi and Rachana gets serious there is some momentum and engaging proceedings. While the romantic track itself is a drag, its repercussions related to the future holds one’s interest. How would Naidu and Mohan Rao react when the bubble bursts are what keeps afloat the narrative. These constitute one final stretch of episodes in the series.
Besides the love track, the flashback of Indira, and Gopi-Harsha involvement offers some intrigue. There was a good theme somewhere in between, but it is all dealt half baked and again, offer nothing new.
The ending (more like a midseason finale) takes the serial approach and sentiment to the next level. Some characters behaviour and action are so laughably outdated. But, it’s alright as one gets used to the whole thing by that time.
Overall, Parampara is a predictable crime drama involving a powerful family. The core conflict and grand production values offer some attraction, but that’s it. If you like the genre and don’t mind the cliches give the series a try.

Several actors are part of the proceedings. However, only a few play key roles. The topmost names on that count are Jagapathi Babu and Sarath Kumar. Both are given good roles, and they do the required with ease. They have done similar parts in the past many times and hence it’s a walk in the park for them. Sritej and Prawin Yendamuri playing the younger versions are also good.
Ishaan has a good beginning and end to his role. He could have been more effective in the portrayal. He looks at ease playing the easygoing guy at the start. But, one can feel him straining during the key sequences towards the final. Aakanksha Singh looks lovely and has a decent role. She does well in the limitations of the part. When compared to the other female leads, she is definitely better, though. Aamani gets a predictable role, and she does as expected from her. Naina Ganguly is alright whereas Kasthuri overacts.
Among the rest of the supporting cast, Kedar Shankar registers due to his unbelievably bad over the top vengeance declaration moment. Jogi Brothers are okay. Arjun and Kamalakar are wasted in routine roles.

The background score by Naresh Kumaran is forgettable except for one recurring sound which is the highlight. The cinematography is below par despite excellent production values. The framing makes the whole thing look like a rich serial. The editing needed to be crisper. There is an extraordinary amount of needless lag throughout the duration which could have been easily done away with by Tammiraju. The writing by Hari Yelleti is poor and pretty banal. It is a significant reason for the lack of depth and intensity in the proceedings despite decent efforts by the actors.