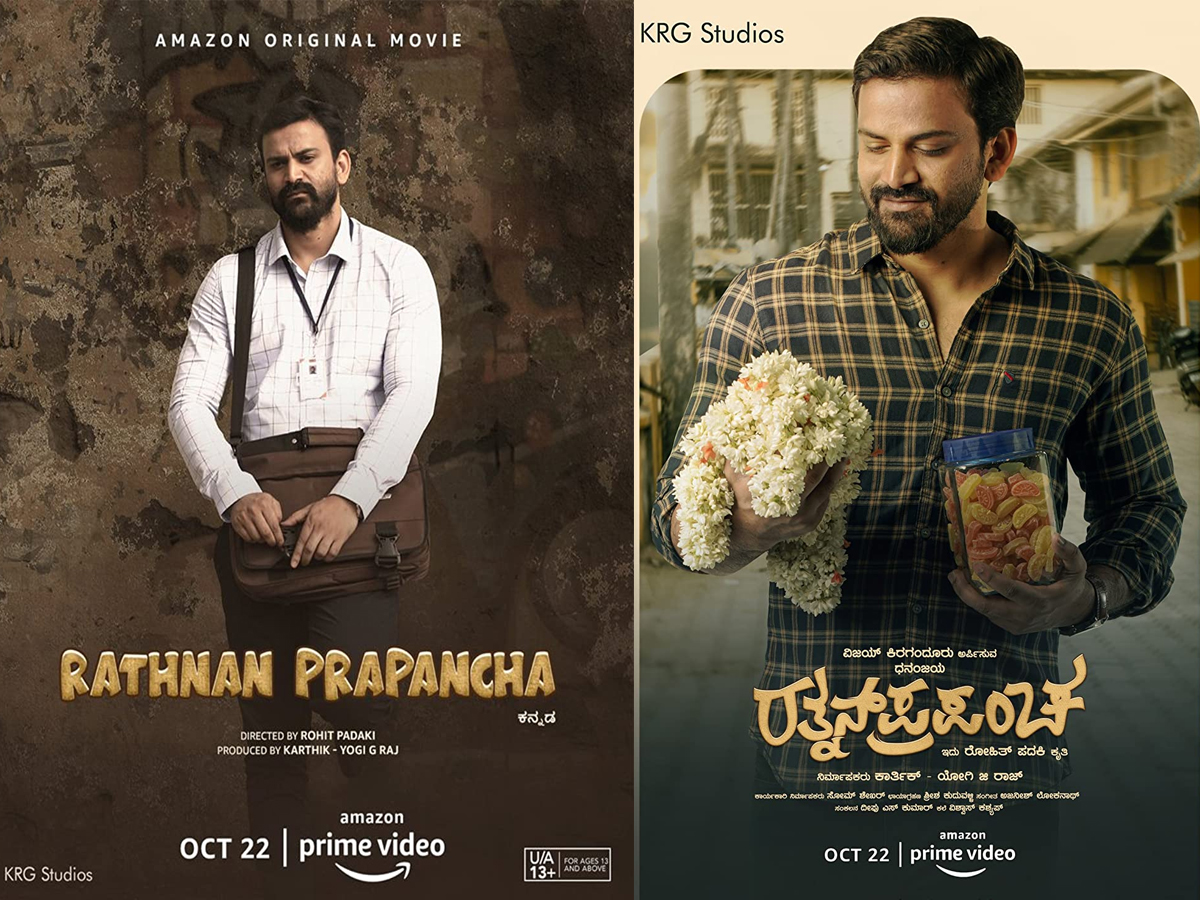 Rathnakar (Dhananjay) is a LIC agent who hates his life. The main reason for that is his mother, Saroja. She always makes him embarrassed and irritated. One day Rathnakar comes to know that he is not the real son of Saroja and is instead adopted.

Without any hesitation, Rathnakar decides to leave her mother to find the real one. Where the journey leads him, and what he discovers in the end? How it changes him is the movie’s core plot.

Dhananjay is superb in the role of Rathnakar. The initial frustration and over-the-top manifestation, the fear of the uncertain, and finally the ultimate realisation are all done with intensity and energy. He looks like overreacting initially, but that is greatly compensated by the end.

Rohit Padaki directs Rathnan Prapancha. It is a coming of age theme where the lead protagonist discovers his genuine love for the mother. The basic story is predictable from the onset, but the director handled it well, mostly.

Right from the first frame, Rohit draws us instantly into the world of Rathnakar. The small colony house, the congested space, the ‘over the top’ bonding between mother and son are all quickly done.

Things are stretched more than required initially, which could have been trimmed. We get that Rathnakar is irritated with his mother and also that she is hyperactive and loudmouthed, but it seems to be going on and on initially.

The actual story takes off after more than half an hour when the issue of adoption is revealed. The narrative then takes a drastic turn into a documentary when the flashback. There is an uneven tone, and it continues that way until the end.

The whole Kashmir block could have been better written and executed. It all boils down to a critical conversation, which helps in the narrative’s further progress.

The film’s real drama is stored in the Yellava thread and the village headed by Udaal Babu Rao. Once again, there is inconsistency in tone as the narrative shifts from comedy to drama to romance, but it hits home the emotions when it matters.

The entire climax stretch is neatly executed with emotions intact. If one is following enough Kannada movies, the ultimate ending isn’t much of a surprise. It is par for course, but the emotions work out, and so do the writing.

Overall, Rathnan Prapancha oscillated between bland and beautiful emotions, whacky and calm moments. It works in parts for the most part but gets it right in the final stretch. Watch it if you like to watch an emotional drama about motherly love. But, be wary of the excess (needless) in length and entertainment.

The casting of Rathnan Prapancha is good. Reba Monica John playing the female lead is a mere technicality. She is present throughout the narrative as a guide and does her part decent. However, it is the mother characters essayed by Umashri and Shruti who shine. Umashri is a hoot playing the typical loud mouth no-holds-barred mother. All her scenes are written and executed well, but they do feel excessive. Shruti leaves her mark during the pre-climax portions.

Pramod Manju stars ordinarily but ends on a good note. He did a neat emotional performance in his characters final few moments. Achyuth Kumar is reliable as usual, playing a comic relief part. Anu Prabhakar is alright. The rest of the actors do their minor roles adequately.

B Ajaneesh Loknath’s music is alright. There are a few songs as part of the narrative, but only one is impactful. A single in the second half feels unnecessary entirely. The background score is lovely, and it is here that the narrative imparts a soul at critical moments. It is especially fantastic during the climax portions. The cinematography is decent for the most part. The editing could have been better. Many filler scenes add to the length. The writing is proper throughout.

Yes, For the Most Part