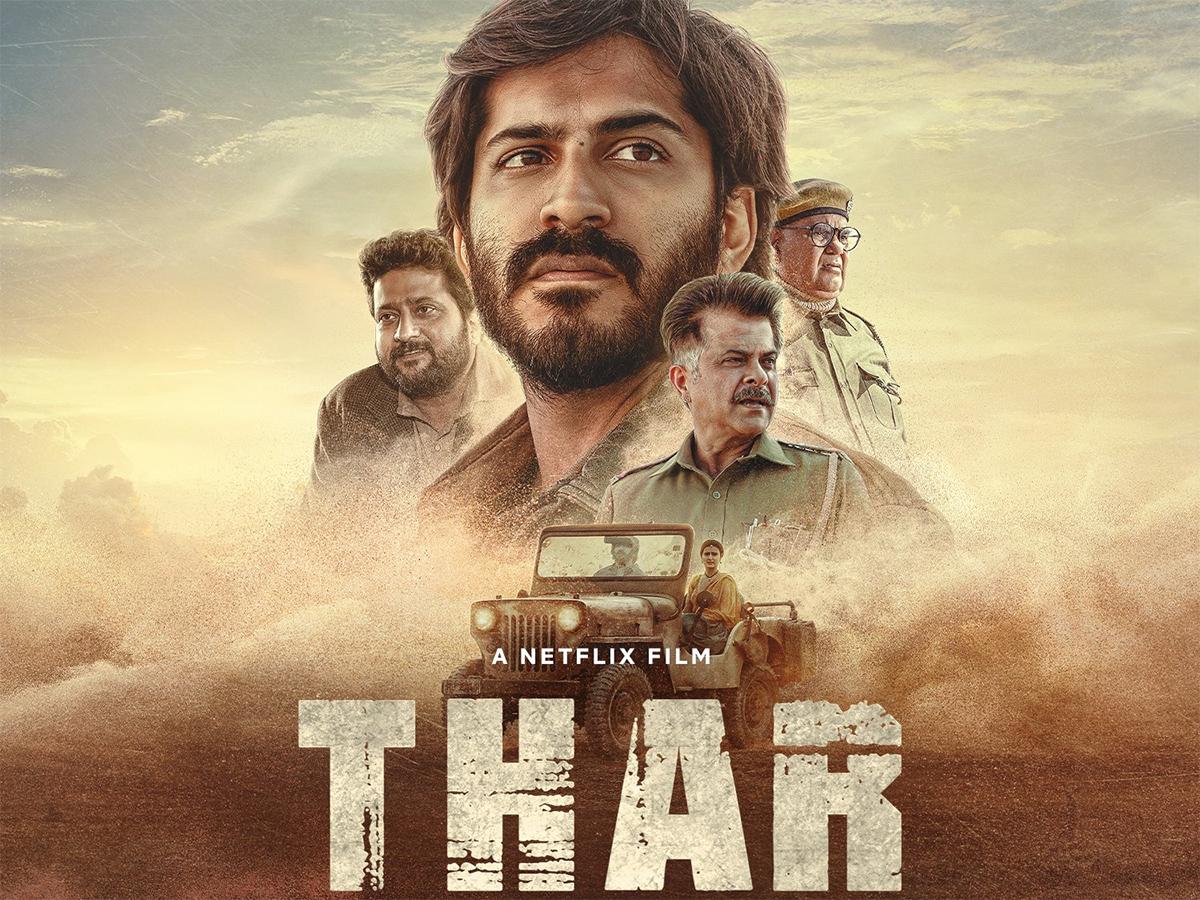 BOTTOM LINE: Strikingly Made, But Appealing In Parts

Set in a village in Rajasthan in 1985, Thar is about a cop Surekha Singh (Anil Kapoor), who investigates a series of violent killings. Meanwhile, Siddharth (Harshavardhan Kapoor) lands in the village to get some people for work in the nearby town.

Did Surekha Singh find the killers? What is the real motive of Siddharth? What happens when the two cross paths constitute Thar’s overall plot.

Anil Kapoor is easily the best when it comes to performances in Thar. He played an aged cop who has managed to survive without doing much. His lack of growth in ranks, his frustration and a natural grasp of the conditions are well portrayed by the senior actor.

Harshavardhan Kapoor comparatively is moodier and talks less. The idea is to give an intense portrayal with more emotions and rage, but the act doesn’t come across that way. It looks like a part designed to hide the weaknesses and enhance the little things that work to Kapoor Jr’ advantage. He is alright, eventually.

Raj Singh Chaudhary of Shaadisthaan fame directs Thar. It is a straightforward tale of revenge set in the vast stretches of desert areas of Rajasthan.

The first thing that stands out watching Thar is the technical brilliance. It has an immediate impact. It is a remarkable improvement for Raj Singh Chaudhary from his Shaadistan, which looked like a poorly made documentary.

The visuals instantly draw us into the world, and what follows is a gripping narrative initially. The first half an hour feels like random people moving in and out doing random acts within a striking canvas. But, it all works out due to the new setting and the curiosity factor.

As and when the story is revealed, it is clear where Thar is headed. The more information we get, the routine it turns out. In the end, Thar is a regular revenge drama where the protagonist avenges a painful loss.

The technical departments and the cast make one look forward to the proceedings even though it’s predictable. There is curiosity about what is happening in the place. What sinister things are slated to happen? It doesn’t turn out that way which is disappointing.

The raw violence, striking visuals, and background score are the elements driving the narrative more than the story. The western influence can’t be missed, and it also adds to the appeal. But, these are all surface-level touches as the core drama is weakly written, and the story is very routine. On top of it all, the whole thing leads to a predictable end.

Overall, Thar is a routine revenge drama artistically executed with technical brilliance. Give it a try if you don’t mind the routineness for the freshness of the setting.

Fatima Sana Sheik plays a housewife role that offers some intrigue. Her actions provide some bold moments in predictable terrain. There is some mysterious quality to her part, which she brings out well. However, it’s a role that comes only in bits and pieces and feels underutilized. Mukti Mohan has an even weaker part. Satish Kaushik is reliable as always. Jitendra Joshi shines in the few scenes he gets. The rest of the actors have done decently even though they don’t have much screen time.

Ajay Jayanthi’s music is superb. It keeps the tension alive and buzzing even when nothing is happening. The real highlight, though, is Shreya Dev Dube’s cinematography. It is excellent and almost like a character in the movie. The plain sand dunes and vast emptiness add to the dreary feel. The locations have been wonderfully captured. Aarti Bajaj’s editing should have been better. The pace of the movie is lethargic. The writing also is weak.