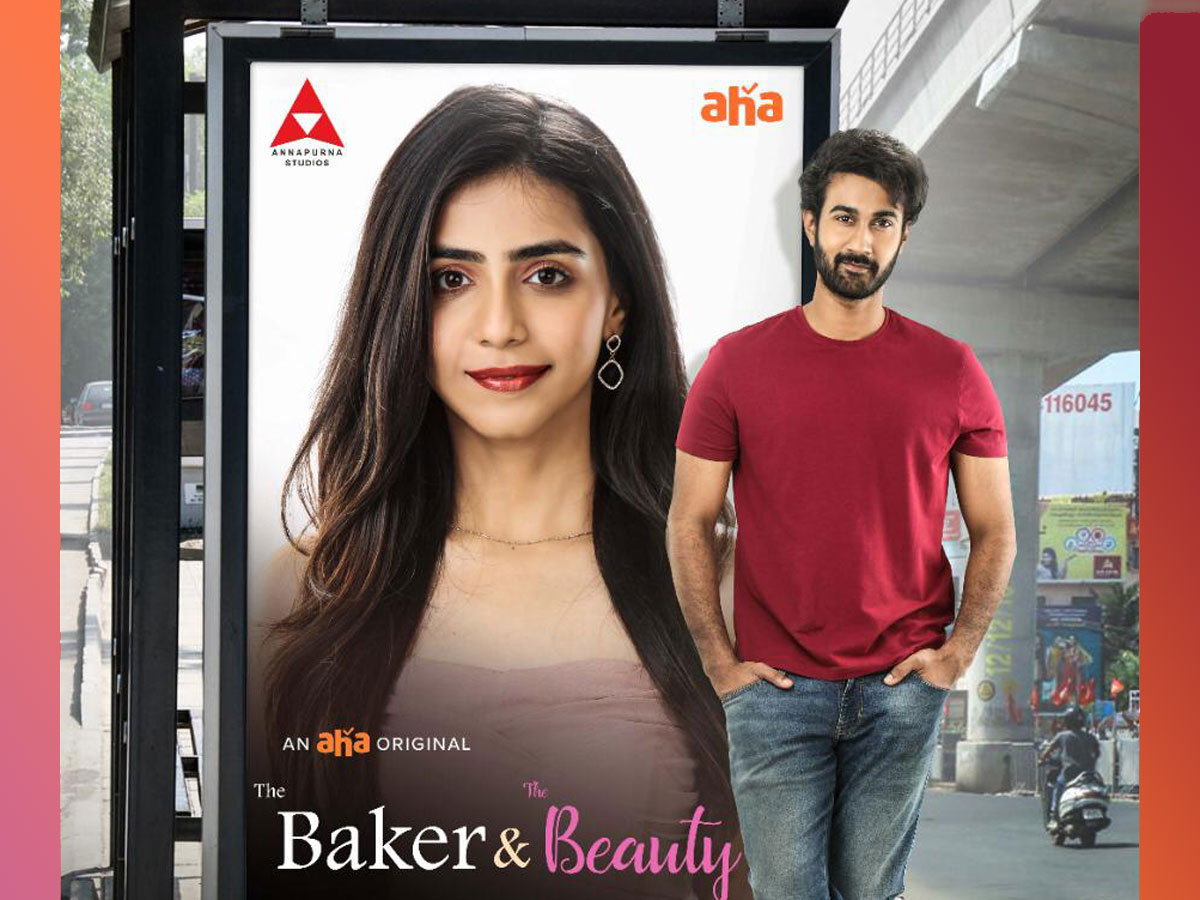 How Aira and Vijay meet each other and fall in love? What happens to their love story, in the end, is the basic line of the series.

Santhosh Sobhan and Tina Shilparaj are the main pillars of The Baker And The Beauty. They are the lead pair, and it is on them the entire movie rests. They have done a decent job.

First of all, both suit their parts. It is a good casting choice. Santhosh Sobhan has the right casualness and intensity to stand his ground and make the character believable. The lack of confidence the character exhibits seems to come naturally to him. He was seen with similar traits in Ek Mini Katha as well. His strengths are the laidback attitude and anger, which are highlighted at critical moments. The Baker And The Beauty is a big role for him, and he has done well.

Tina Shilparaj looks lovely for the part of a star. The calm looking yet wild activity is spot on. A classy vibe is also present, which helps in bringing a clear distinction between the leads. It is necessary for the story, so props to the casting. However, she fails in expressing the confusion going on in Aira’s mind regarding love. It becomes tiresome after a point.

Jonathan Edwards directs The Baker And The Beauty. It is a Telugu remake of a successful Israeli series of the same name. It also had a few more remakes as well. What it basically suggests is the story has a broader acceptance. Better handling and customising it to nativity is all that is required.

The director and his team are not entirely successful in adapting The Baker And The Beauty to our nativity. It starts with the title itself, where the ‘Baker’ background isn’t a vital part of the narrative. It is a mere technicality to present the class difference between the lead pair. This isn’t the case in the original, where the bakery aspect is integrated into the story. It is not that the director hasn’t tried to do, but it comes across as half-baked whenever done.

The central love story between the lead pair is key to the narrative, no doubt, but other sub-plots fill the story. They come from the characters of brother, sister, mother and manager. These various subplots are not merged well to form a seamless narrative.

The screenplay is uneven. Its transition from one sequence to other feels abrupt many times due to the various characters. It doesn’t let the narrative build a proper momentum. It is a bigger issue in the initial segments when all the characters are introduced, and progress is made related to their tracks.

As said at the start, the story is a success, which means there are merits inherently. They bring us the best segments, but only in parts. The consistency with them is missing.

The sister’s subplot, for example, needed better writing. The main thread appears repetitive after a point. The deranged lover gets on our nerves due to missing clarity on her actions. It starts and ends with the same conundrum making it look like having no progress at all.

There are many issues similarly, but the story keeps moving forward whether one connects to it or not. The end is a positive, making one give the whole thing a pass.

Overall, The Baker And The Beauty is a well shot and executed classy rom-com that works in parts. Given the cast and a pleasant warm vibe throughout, it is a passable watch that one could try over a lazy afternoon.

Apart from the main leads, Sangeeth Sobhan and Venkat have got the best roles characterisation wise. They are easily likeable and connect with the audience. Sangeeth is a natural with his Telangana slang and hits the right notes of ‘bromance’. It might have also helped him that Santhosh is his real-life brother. Venkat is fortunate to get such a character, probably the best for him in two decades. But he doesn’t fully realise its potential, though. He goes about the role flatly.

Vishnupriya is apt for her part, which, unfortunately, is not well written. It gets irritating very soon, and the acting is affected in the process. Sai Swetha is okay in her role that offers the series’ biggest challenge. It is not dealt with convincingly and makes the whole track look forced with the Telugu adaptation. Jhansi and Shrikanth Iyyangar are fine.

Prashanth R Vihari’s music and background score are good. The latter especially sets a perfect mood for the proceedings. The cinematography by Suresh Ragutu is decent. The editing by Nageswara Reddy Bonthala is weak. The sluggish pace and abrupt cuts derail the momentum from time to time. The writing is alright at a basic level.

Repetitive After A Point