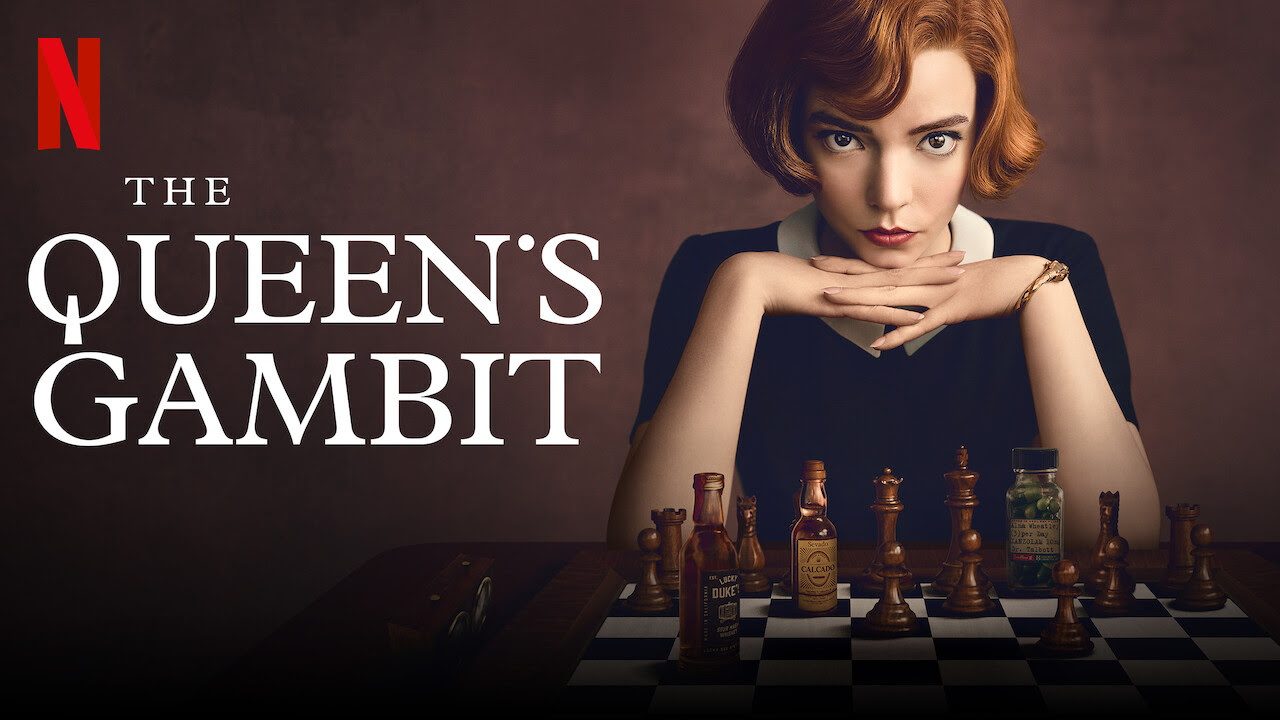 BOTTOM LINE: A Leisurely Paced Drama That Turns A Compelling Watch By The End

The Queen’s Gambit tracks the journey of a child prodigy Beth Harmon on the world of Chess. How Beth an orphan learns chess and emerges a champion in what she does. The pitfalls she faces along the process and various issues she overcomes, form the overall plot.

Anya Taylor-Joy playing Beth Harmon lives in character. It is a wonderfully written role with many layers and shades of emotions. She has done an excellent job of coming up with a compelling act. If she has failed, the entire narrative would have crumbled.

The stubbornness and fall, followed by the realisation and then raise as a character is the primary arc. At all the significant points, Anya Taylor-Joy makes one hooked to the proceedings with her riveting performances.

Several sequences have no dialogues and rely only on her to carry it off. These could be immensely boring and make one fast-forward, but that is not the case here. It is an example to show how well she has done in part.

Scott Frank is director of the series. He is also the creator, along with Allan Scott and is also one of the writers. The story of The Queen’s Gambit is simple, but the vast scope and emotional depth and hope it offers is where it scores.

The opening episode sets the tone for everything else that follows. The first thing to get used is pace. If that is not an issue, there is no looking back.

The real story kicks in once the chess angle is introduced in the narrative to young Beth Harmon. The proceedings appear a bit dark and slightly disturbing in due to a bleak sense until that point. The ‘chess’ really comes as a shining light both to the protagonist and the viewer.

From then on-wards, the proceedings get better, but there is never any hurry. The narrative moves at a leisurely but assured pace. There is an air of confidence. We feel that during the chess sequences initially.

As the journey with the lead character continuous, and then her mother, somewhere along the way the emotional connection starts to develop with the ‘mother-daughter’ pair. It is very carefully done without one getting the feeling that the mother is being exploitative. In fact, the ‘mother’ role, which seems very one dimensional initially, we later develop a bond with it. What appears flat, grows into a beautiful relationship, eventually.

The main and subplots steadily merge into a focused narrative that hits all the right emotional buttons. The loss of the lead character, how she copes with it and her rise to achieve the impossible hits the target. During these entire process, one forgets to realise how young she is doing all that and going through the various emotional turmoil’s. They are all conveyed effectively and emotionally.

The climax is the real clincher after all that has happened. A couple of sequences and conversations are sure to make eyes moist. And finally, the ‘Endgame’ gives us a heroic high. The final walk leaves us with a lot of hope and undercurrent warmth. The love for a game (here, Chess) is also done with great interest and care. It is these aspects that make the series a winner.

Overall, The Queen’s Gambit is a well-performed and mounted drama that hits the right notes despite its slow pace. It engages as much as it thrills with its Chess-work. Do give it a try to lift your mood if gloomy.

The entire cast of the series is terrific. Even a small role stands out at the end as they all get a neat closure and moments to create an impact.

Bill Camp is the standout. It is with his characters interaction with Beth Harmon that the story kicks off. Their track is what brings out the compelling aspect to the fore. No wonder the closing scene involving these two characters generate the reaction it has.

It is the same with Marielle Heller and Moses Ingram. All these journeys end on a high note. The various actors who play chess players are also wonderful.

The music is soothing and elevating the emotions entirely. It also adequately keeps the thrill alive during the chess sequences. The cinematography by Steven Meizier is fantastic. We are taken back into the yesteryear’s cold world era. The editing could have been better, as there is a lot of drag in parts. The writing by the various names is terrific. It, along with the performances, are major driving forces for one’s engagement to the proceedings.