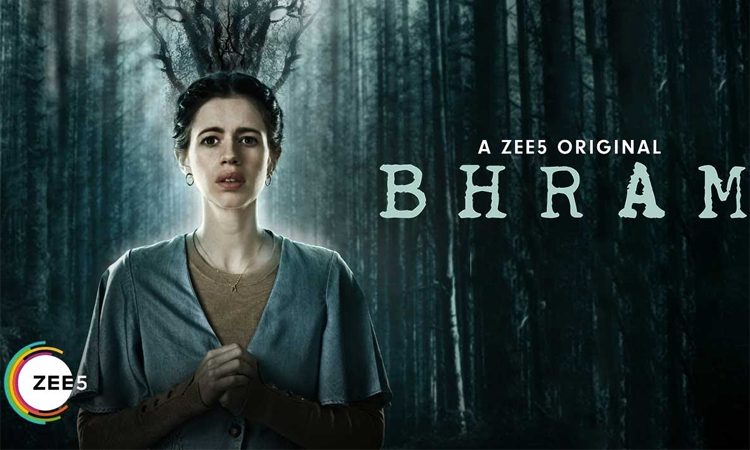 Bhram revolves around the story of a novel writer Alisha Khanna, who fails to get a grip on reality after losing her husband and unborn child to a terrible accident. Expectedly, she struggles to move on from the personal setback. Memories of her past aren’t quite vivid in her mind, she goes through the motions while dealing with a post-traumatic stress disorder. Her sister Ankita comes to her rescue and tries to usher in normalcy.

Alisha shifts to her sister’s house for the time being to pen her next novel and makes repeated attempts to recollect episodes from her past. The hallucinations about a teenager Ayesha, though, keep haunting her. She insists that Ayesha isn’t a figment of her imagination but the world isn’t willing to believe. A series of deaths in the small town puts things in perspective. Will Alisha be able to connect the dots?

If there’s someone who brings believability to the series and its sometimes-wayward narrative, it is Kalki Koechlin. Her performance conveys the sense of confusion in her while differentiating between illusion and reality. She brings an innate sincerity to the role and makes sure that you invest in the plot. However, the characterization could have explored more of her dimension as a novelist.

Bhumika Chawla’s role is more of a supporting hand to the protagonist. Though the part may not do justice to her potential, she brings believability to her act. Sanjay Suri, Ejaz Khan, Satyadeep Mishra get interesting roles with the shades of grey, to which they do justice. Vikram Kocchar is a surprise choice for the role he gets to essay (not revealed, in an attempt to avoid spoilers) and he presents an unknown intense side to his repertoire, which he is quite convincing. Chandan Roy Sanyal and Omkar Kapoor have very little to do though. The younger actors playing the college students in the subplots are convincing in their brief portions.

Bhram starts as a vague thriller with a hazy plot and only comes into its element gradually. The first few episodes struggle to convey anything concrete and just before you give up hope, there’s considerable progress in the storytelling. As a novel/script, Bhram could have been a page-turner with an interesting mix of psychology, crime, and folklore. While translating onto the visual medium though, the blend isn’t quite seamless. There are intermittent flashes of brilliance but the sequences don’t quite add up the way you expect it to.

There’s a parallel narrative of a two-decade-old love story gone sour that’s eerily similar to a present-day incident. Alisha firmly believes that she knows something that connects the two incidents. Her psychological issues become a roadblock to her path and suddenly, she is a prime suspect in an investigation about a series of murders in the town. The conflict is interesting but none of the subplots is affecting. The non-linear narrative contributes to the confusion. The viewer remains as confused as the protagonist about the difference between Alisha’s illusions and reality. Several sequences appear vaguely stitched together without much coherence.

What works is the suspense element towards the end though. The three potential antagonist-suspects of the 20-year-old incident are eliminated one after the other and the build-up towards the finale is intriguing. The characterization of a man who dons an animalistic avatar a.l.a mythological figure to protect the forest from supposed wrong-doers is indeed fascinating. However, this isn’t explored with enough clarity. Though the material in the hands of the makers is imaginative, the execution is choppy.

The thread about the raunchy personal life of the cop is a total waste of time in the bargain for a few sexual thrills. A smarter, crispier screenplay could have saved the day for Bhram. Sangeeth Sivan, the director, is as usual very original with his idea. He had the potential to make it a consistently engaging series but only manages to craft a modest outing that doesn’t rise beyond the surface. The credible performances are somewhat of a resurrection act.

Technician contribution-wise, there’s little to complain about Bhram. The theme song is mysterious and captivating, so is its edgy background score lending enough tension and vigour to the narrative. Vidushi Tiwari as a cinematographer is quite good at her job while capturing the enigma of the landscapes beneath their visual beauty. The writing is generally neat, but it’s the ambiguous narration where the series suffers the most.