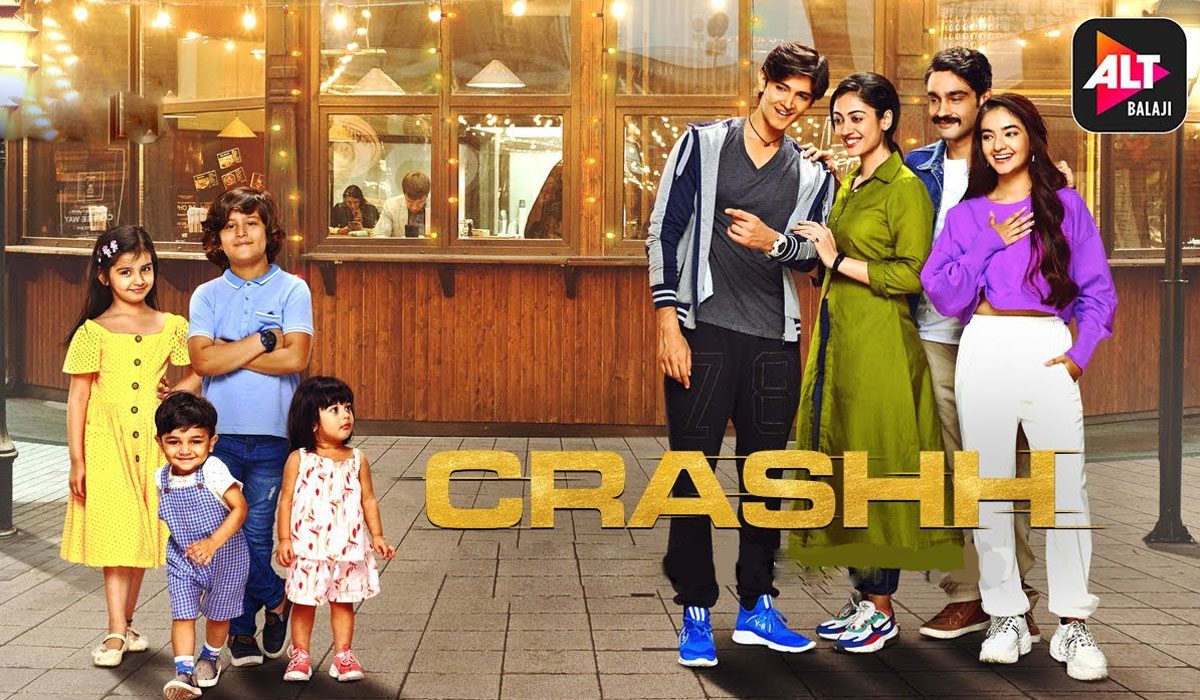 Crashh is the latest offering from the Alt Balaji and ZEE5 combination. It is an emotional drama that centres on the theme of siblings separated by fate, with suspense and intrigue added to the mix, much like the Manmohan Desai films of yore.
A couple (Rushad Rana and Suchita Trivedi) is killed in a car crash. Their four kids are put into an orphanage and adopted by separate people, thus ending up in different families. The eldest Kabir (Kunj Anand) grows up to be a police officer. The next sibling Kajal (Aditi Sharma) grows up with a single woman who is in an affair with a married man and has mental health issues. The youngest two are the twins who remember nothing of the car crash or of being adopted. Alia (Anushka Sen) grows up in a rich, privileged household, while Rahim (Rohan Mehra) is adopted by a Muslim family and grows up to be a driver.
The rest of the story hinges on the siblings’ coincidental clashes, fateful coming-togethers and serendipitous intertwining of their lives.
Crashh has been directed by Kushal Zaveri and produced by Ekta and Shobha Kapoor. The screenplay is by Gautam Hegde, story by Nikita Dhond, and dialogues by Aparna Nadig, with additional dialogues by Prachi Shrivastava.

The performances in Crashh are its highlight. Each of the actors has put in a worthy performance. Kunj Anand is refined and restrained as Kabir. Aditi Sharma is pretty, poised and always in control as Kajal. She’s also the narrator of the story, of which she’s done a remarkable job. Rohan Mehra gets the body language and mannerisms of a lower class guy growing up in difficult circumstances just right. What with his poverty and lack of education, his character evokes the most pathos amongst all the four separated siblings.
Anushka Sen, all of 18, is surprisingly subdued and sophisticated as a hoity toity Instagram influencer. It is a role that could very well have fallen into the realm of over the top and garrulous if not done right. But Anushka Sen simply nails it. Despite having grey shades to her character, Sen’s Alia comes across as sensitive and adorable.
Zain Imam lends a quiet classiness to his cynical Rishabh. We are not revealed the reason for his character’s cynicism, but empathise with him, nonetheless. The older set of actors are about average in their limited roles.

Despite being riddled with loopholes, Crashh has a certain engaging quality to it that compels one to keep watching the show. The short, crisp episodes are a distinct advantage in keeping the engaging factor alive. Each episode is over in the blink of an eye — actually, 15-18 minutes —and you inadvertently find yourself hitting ‘next episode’ to know what happens after. Makes one question the need for the slow, long-winded storytelling adapted by platforms such as Netflix and Amazon Prime Video. Why have one-hour-long rambling episodes, when the story can be conveyed just as well in 20-minute crisp episodes?
The plot seems a tad bit contrived. All four siblings keep bumping into each other, with their lives intertwined irretrievably by the second episode – far-fetched and contrived, we must say. That said, we’ve not had an emotional separated-siblings-who-eventually-find-each-other drama for so long that Crashh comes across as a welcome change from the usual OTT fare.
Of course, the story is infused with the usual masala and intrigue to make it interesting for diverse viewers. There’s even a love triangle brewing, and we can see from a mile away that one sibling will sacrifice their love for the other. Crashh is clichéd that way, and yet, it is not boring.
A little bit of flair while reuniting the siblings would have worked well to make the show a memorable affair – a well-loved limerick from childhood; a Yaadon Ki Baarat-esque song number; or even a ‘Johny Mera Naam’ type “Yeh aaya right, Yeh aaya left” sequence would have been great. No harm in lending some cinematic flair and flourish where it is essential and enhances the storytelling. That the writers of Crashh made no effort towards that end rankles quite a bit.
Starting every episode with an old Hindi classic number lends a hint of nostalgia and oodles of emotion to the narrative. It is an admirable cinematic device that adds charm to the story.
Season 1 ended on a cliffhanger, as is the norm these days. That means Crashh Season 2 is but a matter of months away. All said and done, Crashh is not brilliant, but it is not bad either. It is not a must-watch by any means, but a can-watch for sure.

The background score by Revan Shekhar, Nakash Aziz, Sargam Jassu and Binod Ghimire and the sundry music compositions are soothing to listen to. They aren’t jarring to the ears, and set the right tone and tenor for the soft emotions that populate Crashh. The title track by Revan Singh is pleasing to the ears.
Editors Vikas Sharma and Vinay Malu have done a fine job of keeping the length crisp, and the narrative fluid.
The dialogues of Crashh by Aparna Nadig and Prachi Shrivastava are some of the best of recent OTT shows. Neither preachy nor pretentious, they elevate the quality of the show to a commendable standard.