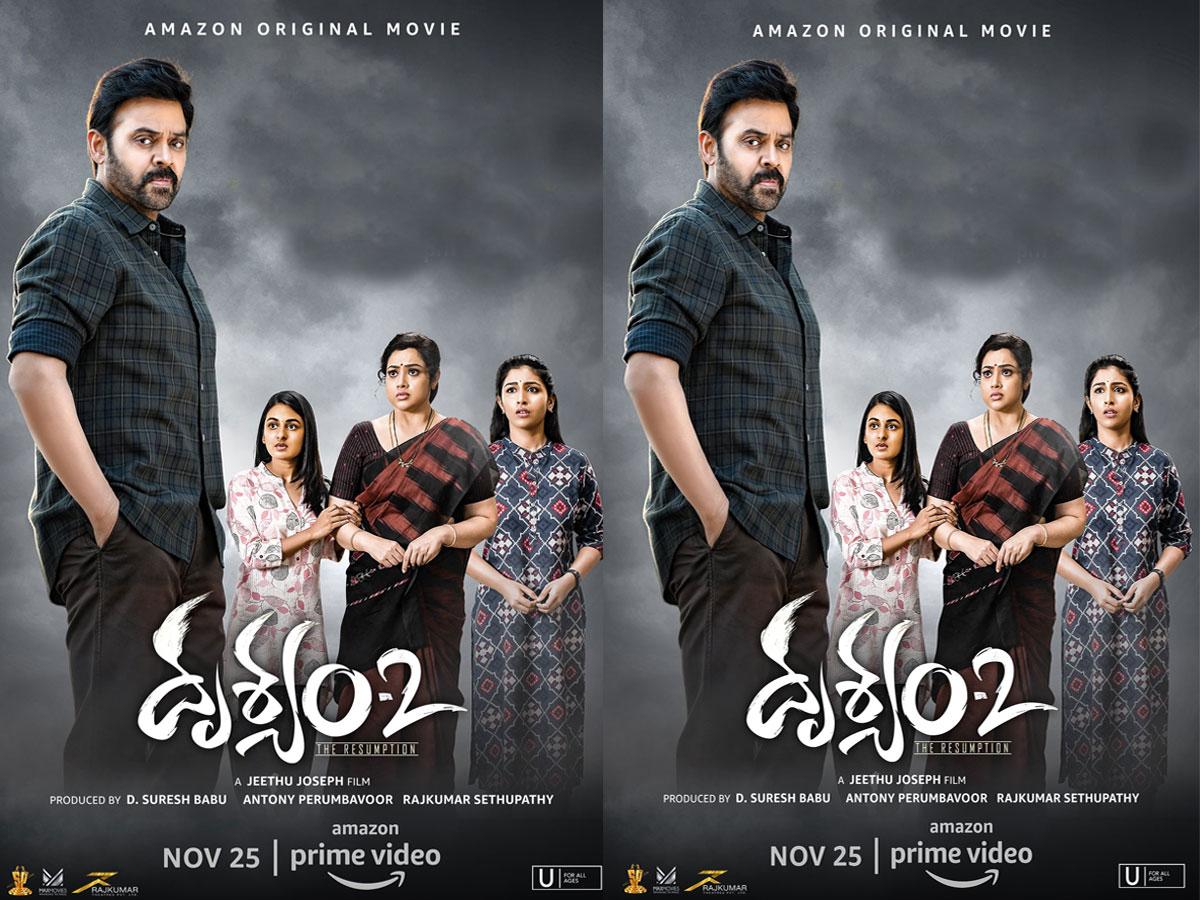 Drushyam 2 takes off six years after Drushyam ended. Rambabu (Venkatesh) has covered up the crime scene and the police department which is in the deep insult of unable to solve the case is still trying to corner him in the case. An unexpected lead frames Rambabu and his family once again. Will he go beyond the bars? To what extent he goes to save his family? forms the rest of the story.

Rambabu’s character is that of an ordinary middle-class/upper-middle-class father. We will get to see him as a doting father. There are no fireworks whatsoever but Venkatesh gives you an ‘adequate’ feeling. The performance gets better towards the end when his family is in distress. Having said that if you start comparing him to Mohanlal in Drishyam 2, maybe Mohanlal scores better.

Drushyam 2 is a continuation of the first part which was released in 2014. Basically, it is the story of a protective father who saves his family from the police after them. The Original director Jeethu Joseph got to direct the Remake as well. The film starts a bit slow. We will get to see some family films revolving around Rambabu’s filmmaking ambition and his daughter’s trauma due to the fateful incident.

The director keeps the audience waiting for a good 45 minutes which makes the audience a bit unsettled. The film turns interesting when the ‘Saritha’ twist is revealed. The proceedings from there to Rambabu’s arrest are on expected lines. They still engage the audience keeping them guessing about what may have happened.

Towards the end of the film, the director chalks out the escape route of Rambabu. All the threads which have happened were neatly brought together and connected surprising the audience. The entire episode till the end of the film is gripping and is the heart of the movie. It is there where Drushyam 2 scores.

While this is about the content, Drushyam 2 has a strange problem. It is the remake of a film which previously released directly on the same platform (Amazon Prime Video). It is one of the widely watched movies after the second wave. So the comparisons are imminent. For those who watched both the films, Drishyam 2 – the original will be a better experience due to Mohanlal and also the first-time surprise. In fact, they may not have any motivation to watch the remake. For those who watched Drushyam 2 without watching the original, it may be a decent watch.

The characters that are the continuation from the Original – Meena, Kruthika, Esther Anil, Nadiya, and Naresh have performed well to the extent their characters demanded. Satyam Rajesh and the girl who played his wife get important roles and they are good. Sampath Raj gets a crucial character and is alright. Tanikella Bharani and Poorna are seen in little roles and they are okay. There are other notable faces like Shafi, Thagubothu Ramesh, Chammak Chandra, Chalaki Chanti, Venu Tillu, and others who were seen in small characters.

Anup Rubens has scored music for Drushyam 2. There is a situational song and it is not impactful. The background score will be very important for any thriller. The background score here neither serves nor defeats the purpose. It is strictly okay. The camera work is alright and the production values are in accordance with the story. The team should have taken care of the slow parts in the first half. It is also the case with the Original and is not taken care of in the remake as well.