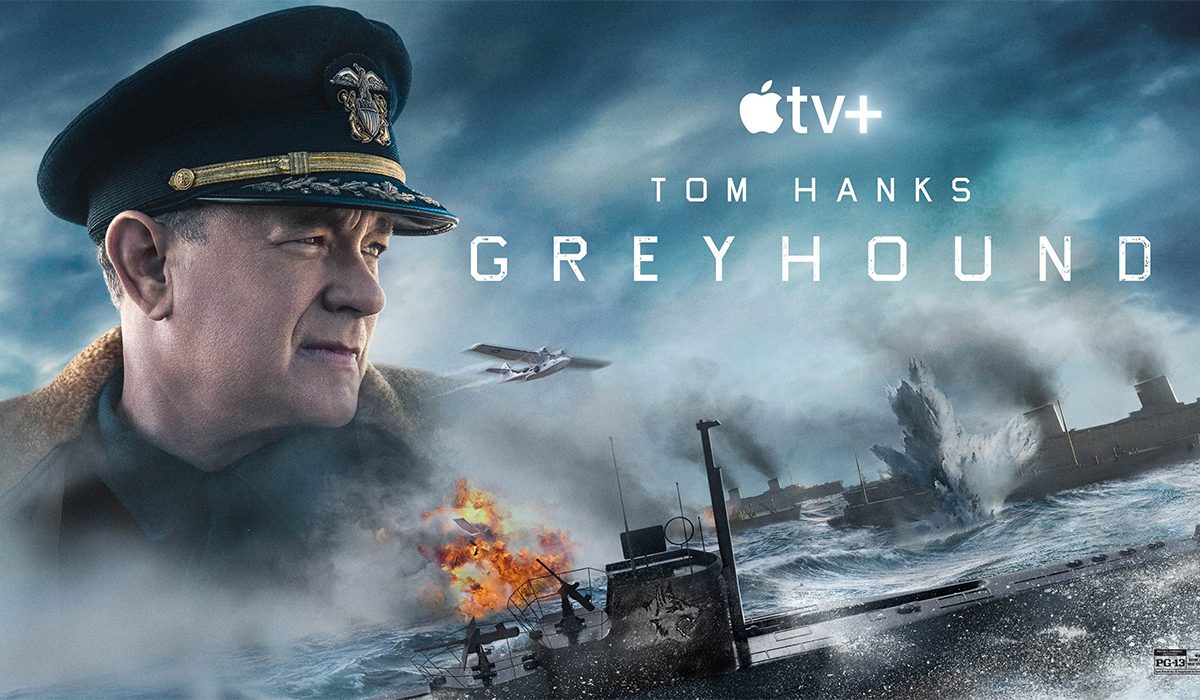 Greyhound is centred on the devastating Battle Of The Atlantic, a less-screened part of World War II, when the Allies and the Axis powers engaged in marine warfare in the midst of the vast and perilous Atlantic Ocean. It is based on the 1955 novel, The Good Shepherd, by CS Forester. The movie, set in early 1942, tells the story of US Navy Commander Ernest Krause, who is handed his maiden war-time assignment as Commander-in-Chief of a US warship — the US Navy destroyer USS Keeling, which goes by the call sign ‘Greyhound’. Commander Krause is in charge of an escort group that has to defend a merchant ship convoy as it sets off from America, and sails across the Atlantic, to deliver crucial supplies to Allied troops in England. Mid-sea, the convoy comes under attack from the German Navy, relentlessly pursued by German U-Boats – sophisticated German submarines – that circle the Greyhound like a pack of wolves. Krause, with his crew, struggles to stave off the German submarines as they move in closer for the kill. Will Commander Krause be able to steer Greyhound to safety? Or will the bravehearts perish mid-sea, like thousands of navy-men before and after? 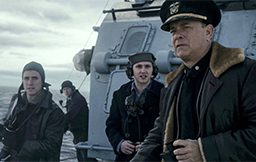 Tom Hanks brings his particular brand of calm, measured and refined acting to lend credence to his character of a first time Commander thrown into the deep end. He portrays the role of an uncertain, under-confident, self-doubting man, made more so by the burden of expectation placed on his wary shoulders, with assured confidence. The movie hinges entirely on his capable performance, just as the Greyhound’s safety, in the movie, hinges on the character he plays. Tom Hanks delivers the role with flawless ease, having had vast experience of playing similar characters in his stellar, decades-long career.

Stephen Graham, who plays Krause’s subordinate, Charlie Cole, lends heft to the cast. His confident, supportive Cole is the prefect foil to the diffident Krause. Rob Morgan as George Cleveland leaves a poignant impact in his short, though memorable, outing. A mention must be made of the voice acting of the artist who voices the commander of the German U-boat ‘Grey Wolf’ – though heard only over the ship’s communication system, his taunting of Krause, propped by a comical imitation of a howling wolf, is really good. Elisabeth Shue’s appearance as Elvie, Krause’s wife-to-be, is a delightful, and dare we say, welcome cameo – hers is the only female character in the movie! 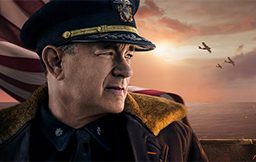 Greyhound is a movie made to be enjoyed on the big screen. The dark, deep, enigmatic depths of the magnificent Atlantic Ocean are an entity all of their own. The ocean looks ominous on the small screen – one can only imagine how terrifyingly menacing it would’ve appeared in a darkened cinema hall, with the full power of a theatre’s audio-visual setup lending even more grimness to the proceedings.

It is a lovingly made movie, and certainly deserved big-screen viewing to give justice to its epical proportions. Greyhound is also significant from another aspect – while both the World Wars have been covered well by the copious number of productions based on them, very few movies have cast an eye on the naval warfare of those times. The Battle Of The Atlantic is credited as the longest continuous action during World War II – it started with America’s entry into the war, and ended with the war itself. 3,500 cargo ships were sunk, and 72,200 souls were lost forever in the midst of it. It is a story that needed to be told, and Greyhound does it exceedingly well.

The movie begins with Krause kneeling in prayer in his cabin aboard the USS Keeling. It cuts to a flashback scene of Krause proposing to Elvie on Christmas Day. He has just been made Commander, a promotion that is apparently long overdue. Pearl Harbour has recently been bombed, and it’s obvious Krause will soon be out at war. The scene instantly shifts to the tumult of happenings aboard Greyhound, in the middle of the Atlantic Ocean. Owing to the vastness of the Ocean and limited capability of the aircraft of those times, the convoy has to make most of the transatlantic journey without air cover. Almost immediately, German war submarines begin tailing Greyhound – we, as much as Krause – are thrown right into the eye of the battle. A lot of naval jargon is bandied about, along with meticulous attention to detail in showing the workings of a naval destroyer caught in war. The next hour is tense — like a tightly-coiled spring waiting to be unleashed. The stark and stringent storytelling heaps thrilling tautness on already goosebump-inducing proceedings. 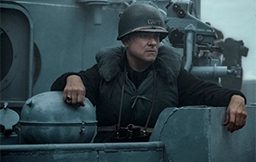 Several ships from the escort group are lost to German attacks while two are damaged beyond redemption – only the Greyhound stands tall. As the German U-boats encircle their prey, hearts leap into mouths and pulses quicken – the viewer’s. Krause admirably keeps his cool in the tightest of situations, despite his lack of confidence in his decisions and abilities; spurred on, maybe, by the expectant faces of his young crew – a sequence we see several times in the narrative.

Tom Hanks owns the role like a savant – the niceness of Ernest Krause is an inherent part of Hanks’ makeup as well. Who better to portray the overly polite Ernest Krause than Hanks. The narrative gets going immediately, and with minimum exposition. We are treated to nuggets of stellar storytelling – the way the screenplay weaves tiny nuances into the narrative is superb — Krause’s politeness, even while giving orders; the way he remembers each crew member’s name; his guiding, nudging and skillful managing of the ship’s fast-depleting resources; his easy patience with the Grey Wolf Commander’s taunting; his grace under fire and admirable reserve under stressful circumstances; his unrelenting watch out at sea; his dedication to his responsibility of defending his ship and the convoy in his charge at all costs, to the point of bleeding feet; the sea burial sequence; and finally, Krause’s interactions with the black messman, George Cleveland. Knowing that the Commander hasn’t had a bite to eat since they the attacks began, Cleveland cajoles Krause to eat his meals, even enticing him with tantalising descriptions of the hot meal. And of course, Krause passes every meal. It is a short, though powerfully structured, sequence. Cleveland’s loss, therefore, is acutely felt, even by us.

The sea battle sequences are simply breathtaking. Torpedoes zip snake-like, riding over the waves, looking dangerous as hell. German subs sink into the angry waters, only to rise suddenly, with the stealth of bloodthirsty sharks. Those scenes are terrifying AF. A harrowing tune plays each time the Greyhound is tailed or marked by a German sub, evoking a feeling that sends chills down the spine. The tension is laid on so thick, you can cut it with a knife. The battle scenes are enthralling, leaving you at the edge of the seat, more often than not. 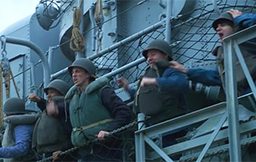 The movie swiftly reaches its conclusion, zipping through the narrative with tightly rendered brevity – no unnecessary meandering along or musing for Greyhound. It does not dwell on instances, nor does it spell out what it wants to convey — relying on the intelligence of its audience to understand the unspoken — the hallmark of great storytelling.

The short runtime – 80 minutes if you cut out the credits – leaves us less invested in the characters and their emotions by the end. There is a curious feeling of emptiness when the movie ends – maybe because of the suddenness of the end – used to as we are to overly dramatic cinematic moments. Thrills are aplenty in Greyhound; as are riveting moments. If there is one thing missing in the movie, it is dramatic flourish. It is too cleanly cut, telling its story in sophisticated, measured fashion. Is that a strength, or a shortcoming? We leave it to you to decide.

Aaron Schneider’s direction is exquisite. He’s done a terrific job with the storytelling, building up the tempo surely and swiftly, and then never letting go. Tom Hanks has written the screenplay — it’s his debut screenplay — and he’s woven a compelling, gripping story that is as entertaining as it is engaging.

The narrative, in Greyhound, is enhanced by majestic cinematography, nifty camerawork and elegant production designing – several shot structures are mind-blowing – the aerial shots of the mid-sea battle, for instance. The inside of the ship is shown perfect to the last detail. Watch out for the shot that moves from the ship to the sky above, and goes beyond the clouds, capturing the vastness of the ocean, the denseness of the clouds, and finally, the Northern lights in the distance. Truly remarkable. Shelly Johnson has certainly outdone himself in Greyhound. 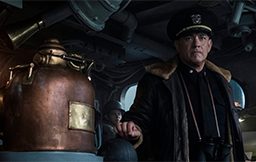 The CGI is commendable – the sea looks like an angry demon spewing fire in the form of treacherous waves. The battle sequences – the computer-generated ones – look as real as they can.

The sound department has worked magic in Greyhound. The ping-ping, as the torpedoes take off, the pow-wow of the exchange of gunfire, the lashing of the waves, all of it is grandly executed. The soundscape of Greyhound is meant to be savoured on a sophisticated audio system – the kind in a theatre.

Lastly, the music by Blake Neely. It is perfect – harrowing, uplifting, terrifying, bracing – it conveys every abstract adjective with flawless perfection. As mentioned before, the piercing tune that accompanies the arrival of the German U-boat is as harrowing and persistent as anything you’ve heard before. It makes your hair stand on end, literally. Likewise, the rhythmic percussive beats that accompany the narrative, add a hint of peril and urgency to the numerous sea battles.