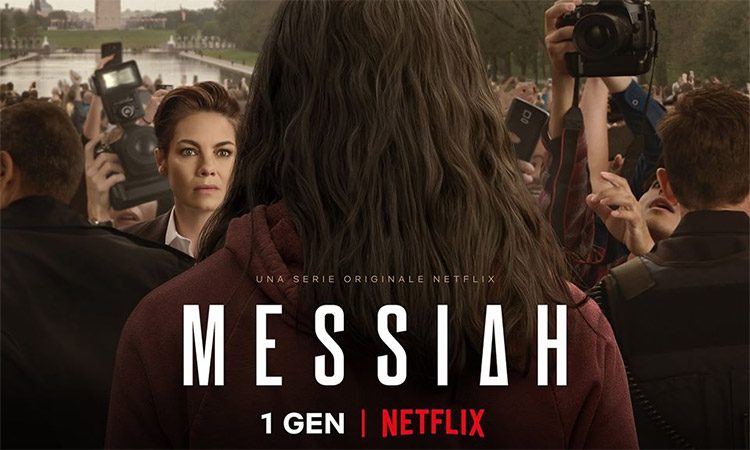 BOTTOM LINE: A Sloppy Narrative Chronicling the Rise of a Cult

Messiah, the latest controversial series streaming on Netflix is a story about the supposed-second homecoming of Jesus. There are lots of questions surrounding the identity of Al-Masih, who rises mysteriously from the Middle East and his mixed origins leave many perplexed. He becomes a globally popular cult figure with his abstract yet emotionally healing speeches, good enough to create political uncertainty in the US. But a CIA agent Eva Geller, suspicious about the malicious intent beneath his goody talk, is here to find some important answers. 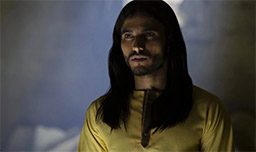 Michelle Monaghan as Eva Geller salvages the show with the right amount of internalisation and restraint in her acting. She looks her part as a CIA agent and within the little space allocated to explore her internal conflicts, Michelle opens you to the soul of the character so efficiently. Mehdi Dehbi, as the modern-day Jesus, Al-Masih, is easily the most annoying performer of the show. He may have got the poise in his role right, but his one-note performance lacks any aura for a viewer to consider his character to be a saintly figure. It’s tough to tell what was more irritating – between his vague monologues and the vaguer performance.

Sayyid El Alami as Jibril is among the rare actors in the series whose performance makes you genuinely feel for the character. The innocence, the helplessness, the slight hint of wisdom and the feeling of being trapped in a hellhole – the actor makes every spectator resonate with his inner thoughts. Stefania LaVie Owen in the role of Rebecca (who may have a key role in the second season) moulds into her part with ease. Other key actors Tomer Sisley, Farès Landoulsi, John Ortiz and Barbara Eve Harris stay true to their roles with distinct identities. 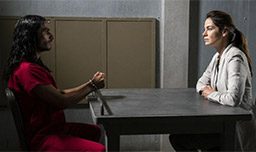 In an already dark world where religious extremism is on the rise and where enough masses are quarrelling about the divisions created in the garb of religion, the last thing that you would want is a digital show like Messiah to rub salt on the wounds. There are enough Gods for humans to argue about and do they need a new one? The ten-episode series, despite the attempt to project a balanced view about the rise of a new cult figure, is largely interested in paying lip service to the vagueness and confusion he creates among people in the name of God.

Had the purpose of the show solely been to trace the identity of a supposedly-God-like figure, Messiah wouldn’t have been as ambiguous. The story wants to talk about the multiple miscarriages of a CIA agent, oversimplify the Israel-Palestine conflict, discuss pre-marriage pregnancy of a 20s something girl, the pain of a teenager diagnosed with cancer and still come back to the story of Al-Masih. The convoluted storytelling spoils the fun. The backstory of Al-Masih, whose original name, you learn, is Payal Golshiri, gets interesting when you hear about his mastery over the art of illusion and him suffering from a delusional disorder.

There are a handful of subplots that informs you about Messiah’s multilayered writing, but nothing translates into a thing of beauty on the screen. Sometimes, it also appears that the director is unsure of taking a stance – there’s sufficient criticism of the protagonist’s character as much as the overt glorification of his cult. There’s a sequence where Payam walks on water to prove his Godly powers, while a few scenes point towards his ability to be a healer. The writers also hint at a connection he has with a global terrorist. And the next sequence has Payam helping a CIA agent escape from the clutches of death. What do you make of this?

Social media is abuzz with discussions if the makers have portrayed the protagonist as a fraud or an Anti-Christ in addition to raging debates about who the actual Messiah in the show is. Those conversations would have held greater value if the narrative was more compelling. A few may say that the series gets you curious by presenting a gamut of perspectives to an incident, but isn’t arresting screenplay the most important criteria of a show? It’s more stinging than intriguing to sit through a fact-heavy show where the atmosphere is pointlessly dull and bland. Watching a snail move would have been more fascinating.

From what the treatment of the story seems like, Messiah’s makers have a notion that they are conveying something significant and pathbreaking to the world. Little do they know that they are only adding more confusion about the several existing isms in the cosmos. The show is hardly effective as a thriller too – there’s nothing remotely slick, not even a single moment that leaves you with an adrenaline rush. A few moments may make you think, especially about the hare-brained ideology of humans, who, time and again, look for a newer God to find emotional solace. 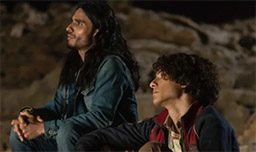 The music, the cinematography and production design come together to create the right visual and aural canvas for the series, though the uninspiring writing fails to lend the vigour to the frames. The writing needed more focus. Though there are several interesting characters through the show, the arcs are hazy and ambiguous. The editing team seems to have been in a slumber-mode during the post-production phase. Cohesion is the last thing you would probably associate with the show.