Home Reviews Never Have I Ever Review – Entertaining Despite Stereotypes And Teenybopper Clichés
Binged Rating6.75/10

Devi Vishwakumar (Maitreyi) is going through a terrible phase in life. She has lost her father and in a shock is paralysed down the waist. After a few months, in time for her sophomore year of college Devi, gets back on her feet.

What happens to her post-recovery and how she wants to bring a positive change in her life forms the core story. The coming of age and coming to terms on various issues, in the process, gives the show a completion.

Maitreyi Ramakrishnan is terrific as the high school going teen girl with many issues to deal. The various emotions related to college and family life are neatly expressed and conveyed with ease. It is a performance that one connects to instantly due to the charm that is on display.

What also helps is an extremely well-written character that offers Maitreyi to shine at every turn. She is one dominating the proceedings, but it doesn’t come at the cost of cutting short other characters. All of this would work and create an impact only if Maitreyi delivers, which she does with aplomb. At times, she is overactive, but it is okay for the terrain.

Never Have I Ever, the series is created by Lang Fisher and Minda Kaling who also double up as writers. Tristram Shapeero, Kabir Akhtar, Linda Mendoza, and Anu Valia, are credited for directing. Despite so many names, the shows maintain a unique and unified voice that doesn’t waver anywhere.

So, basically what we have is a mix of clichés, routine and predictable and stereotypes, and yet Never Have I Ever manages to engage and entertain. 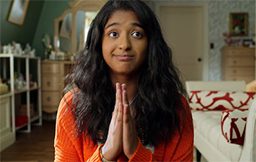 The casting of various actors is so well on the spot, and then the writing is lovely from start to finish. With super slick editing and making, one moves from episode to episode, to see what happens in the lives of characters even if nothing surprising ever happens.

The friendship bond between distinct looking and background girls, their issues are all well explored. A few episodes are a master-class of sorts in how to make the predictable work and win the audience. The one involving Eleanor’s mother is an excellent example in that regard.

The different tracks all work, and one doesn’t get a feeling of tiring or things getting stretched because of the identifiable emotions. They help one coast along. It also helps that silently a message involving the morals and growing up is also passed. Oh, and the fantastic voiceover throughout keeps us laughing from time to time. It is one of the best aspects of the series.

Also, despite being targeted at the teeny-bopper crowd and involving all the clichés, and lots of sexual talks, Never Have I Ever never comes across as corny or filthy. It is not a guilty pleasure variety. It is a teen dramedy that is done right despite ticking all the boxes.

The problem here besides the clichés is the opening which might give the too-routine-for-the-terrain and superficial impression. Also, the ending part is definitely rushed. The core emotional theme could have been brought out in a better fashion.

Overall, if you like movies or series of this genre, you already would be checking it out. Even if you are not, do give Never Have I Ever a chance and it is sure to charm you with its writing and lovable performances. 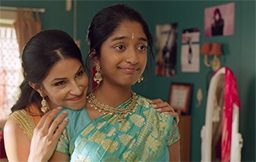 The series is filled with worthy and memorable parts, even if they are for a small duration. They all come with a unique background and are neatly fit into the narrative without being all over the place. It is another sign of superb writing and flawless casting. The friend’s gang played by Lee Rodriguez and Ramona Young are excellent. It gets better as the series progresses due to the increased dramatic tension.

Poorna Jagannathan as the strict and controlling mother tends to overact many a time, but like Maitreyi it doesn’t come as jarring or overthrows the narrative.

Jaren Lewison and Darren Barnet are perfect for their respective roles. They don’t do anything unnecessary and seems to flow along with the rest. Richa Moorjani stands out easily among the crowd due to the characterisation and dialogues given to her. The rest are also superb, which involves, the father, a psychiatrist, the school principal and a few more.

The music by Joseph Stephens is lovely. It helps in enhancing the mood whenever necessary. The selection of popular songs also adds to the impact. The cinematography is typically Hollywood-ish in capturing the Indian household. It still works out effectively. The editing is slick and smooth. There is very little that drags.

A Little Boring and Repetitive Beginning