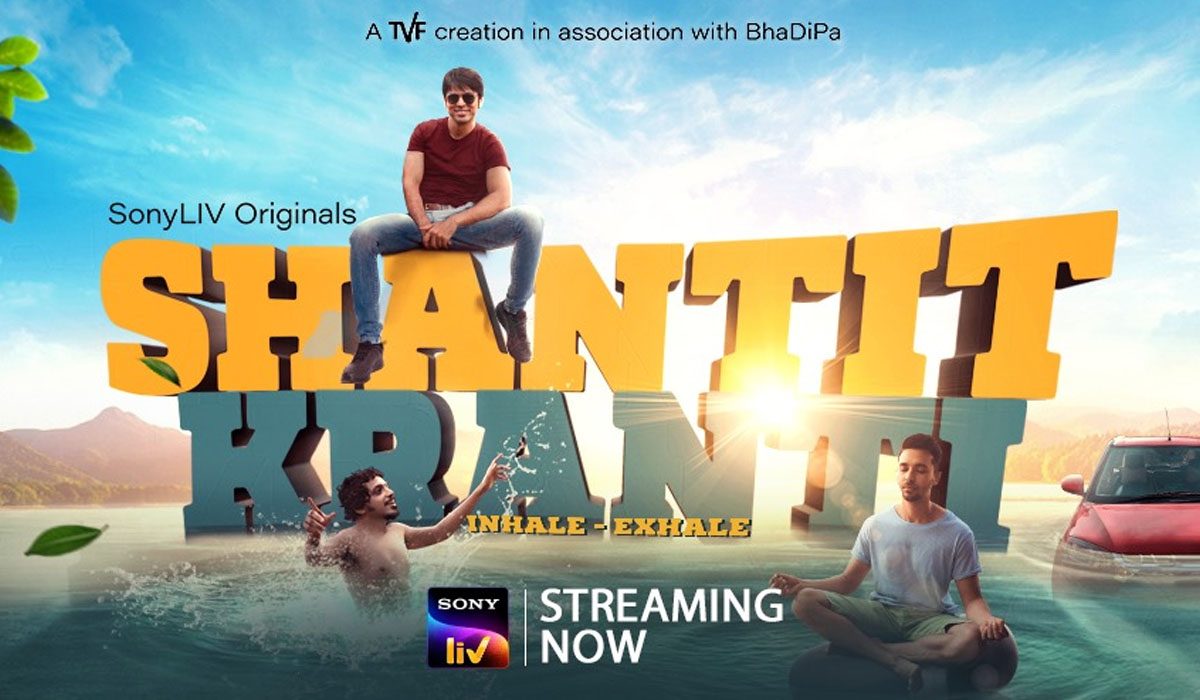 Shantit Kranti is SonyLIV’s new Marathi series, a coming-of-age drama that centres on three childhood friends and how they come to terms with the current state of their lives, unpalatable though it may be.

Shreyas (Abhay Mahajan) is dealing with a broken engagement; an impending baby proves to be a hurdle for Prasanna’s (Lalit Prabhakar) dreams of representing India in swimming at the Olympics; and Dinar (Alok Rajwade) is going through an existential crisis, not to say, turning into an alcoholic like his father. The three set out on a road trip to Goa, but land up in a wellness retreat called Shantivan, run by Neha (Shikha Talsania), which proves to be life-altering for them.

Shantit Kranti is created by Marathi content creators Bharatiya Digital Party (BhaDiPa), in association with The Viral Fever (TVF). It is directed by Sarang Sathaye and Paula McGlynn, the founders of BhaDiPa.

Lalit Prabhakar, who plays Prasanna in the series, gets the part with the most meat in it, and he sinks his teeth into it with gusto. His performance is layered and convincing. Abhay Mahajan seems to be having the most fun playing Shreya in the series. He delivers a natural, nuanced performance. He’s also one of the writers of Shantit Kranti. Alok Rajwade as Dinar is a tad bit unconvincing as the guy who fears he’ll turn into his father, a man he abhors. His performance is uncompelling and over-the-top. Shikha Talsania is in total control of her role as the firm though likeable camp administrator.

More than the lead actors, it is the supporting cast that elevates the story to a watchable drama. Vijay Nikam, as Shankar or the Mahaguru; Sagar Yadav as the local baahubali, Shinde; Ninad Gore as Chhotu; Paula McGlynn as Paula (she’s also the co-director); Suhita Thatte as Kaku; and finally, Dhananjay Sardeshpande as Dhumal Kaka, all of them make their characters memorable and enjoyable to watch.

Shantit Kranti is modeled along the lines of ‘Dil Chahta Hai’, the ultimate road trip and bromance flick in Indian entertainment. The script and screenplay of Shantit Kranti thus goes out of its way to give numerous hat tips to the cult film, from dialogues—the famous “yaa toh dosti gehri hai… yaa yeh photo 3D hai”—to the riveting train and car race.

On a day at the movies, the then school-going friends fall into the spell cast by Dil Chahta Hai (DCH), which lingers on in adulthood. They bicker and banter over who is the Akash (Aamir Khan in DCH) and who is the Sameer (Saif Ali Khan in DCH) of their trio. In a cute little scene outside the cinema hall, the young Shreyas draws a tiny goatee on his chin with a marker pen, thus staking claim to Akash’s character.

Surprisingly, none of it feels forced, tedious or overdrawn. What does feel all of the above is the squabbles and quarrels the friends get into amongst themselves, that too, at the slightest provocation. This part of the show feels forced, unimaginative and contrived. It is also wholly unconvincing. If their “dosti” is as “gehri” as the writers want us to believe, why do the three get into throwing insults at each other at the drop of a hat? It is quite baffling, to tell the truth.

The story is elevated by notches with its characterisations of the supporting characters. Even though the viewer is never introduced to their back stories, one immediately understands where each one is coming from. The Shinde character is a riot – right from his attachment to the tons of gold he wears, to his love for his wife and his gun, it’s a character that makes us smile involuntarily.

The story feels simplistic at times. As contrived as the issues of the three friends are, so is their resolution. As a consequence, the series seems superficial and majorly lacking in depth. It fails to move you or leave any lasting impact. Nevertheless, the short run time and breezy pace doesn’t let the series get too boring or tedious.

To sum it up, Shantit Kranti is a fine addition to the fast-growing Marathi OTT content space. It could have done with some more depth to make it worthwhile.

Saurabh Bhalerao’s background score suits the premise of the series well. Apurva Sahai and Ashish Mhatre’s editing is faultless. Nikhil Arolkar’s camerawork is fine. The place where the wellness retreat is located is pretty and pristine. Arolkar’s camera captures the serenity of the place beautifully.

Tad superficial and lacking in depth