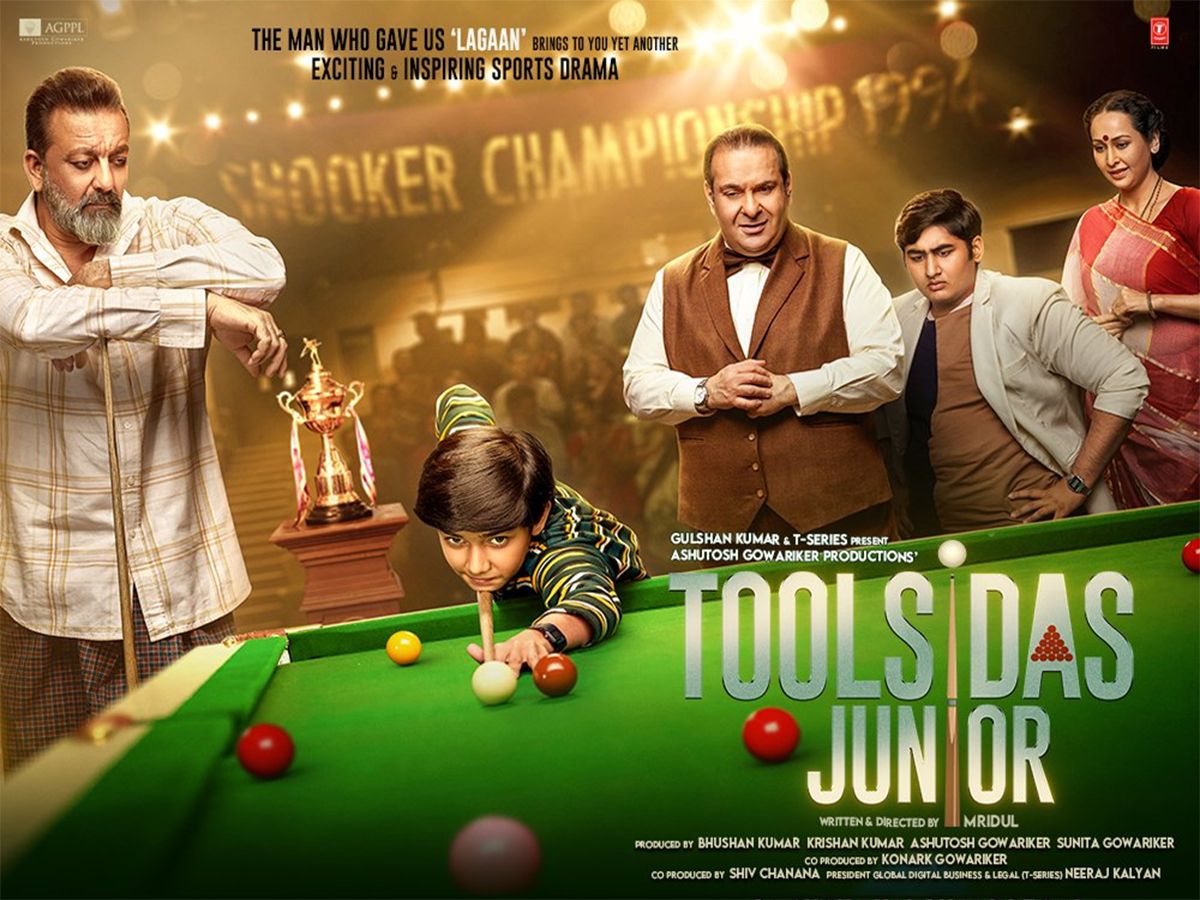 Netflix’s latest Bollywood film, ‘Toolsidas Junior’ centres on 13-year-old Midi, aka Toolsidas Junior (Varun Buddhadev), and his single-minded dedication to win back his father’s honour. After years of watching his father Toolsidas (Rajiv Kapoor) being humiliated in the finals by Jimmy Tandon (Dalip Tahil), Midi wows to win the snooker championship at the snooty Calcutta Club. He finds an unlikely mentor in ex-national champion, Mohammad Salaam (Sanjay Dutt). Will Toolsidas Junior win the snooker championship and his father’s honour?

Toolsidas Junior is written and directed by Mridul Mahendra, co-written and presented by Ashutosh Gowariker, and produced by T-Series.

The performances in Toolsidas Junior are good across the board. Varun Buddhadev is superb as the cherubic yet determined Midi. He delivers a perfectly natural performance, completely shorn of artifice. Sanjay Dutt slips into the unconventional role of a crabby ex-snooker champion with ease. His scenes with young Varun are the highlight of Toolsidas Junior.

Rajiv Kapoor as Toolsidas is flawless. His performance in the film slams home the harsh truth of how scores of good actors have receded into the background after being utterly neglected by the film industry. Tasveer Kalim, as Toolsidas’ wife, and Chinmay Chandraunshuh, as Midi’s elder brother Goti, are equally good in the film. Dalip Tahil is as good in his grey role as he always is.

On the face of it, the story of Toolsidas Junior might be quite predictable. We’ve seen similar stories in countless similar movies before. But even in its predictability, the film manages to steal your heart. The credit for that goes to the absolutely heartwarming script written by Mridul Mahendra. The fact that the story of Toolsidas Junior is inspired by Mridul Mahendra’s own young self adds a sliver of genuineness to the proceedings. At no point in the film does the narrative feel contrived, artificial or beyond belief.

The interpersonal relationships between the Toolsidas family feel real, authentic and delightful. They give ‘Yeh Meri Family’ and ‘Gullak’ vibes in the interactions between the siblings and their parents. The way Midi handles his father’s alcoholism is heartening too. The snooker scenes at the club and the YMCA are equally natural and well-structured. The understated performances from the entire cast give credence to the somewhat incredible story.

Director Mridul Mahendra takes care to maintain precise accuracy in the way he depicts the Calcutta of the early 1990s. The tram journeys, the colonial hangover of the club, people guzzling Campa Cola along with their ‘anda-bread’ – all of it adds a warm touch of old-world charm to the proceedings on screen.

To sum it up, Toolsidas Junior is a sweet little film, with nothing to criticise in it, apart from the fact that it is a predictable, victory-of-the-underdog story. It is a film that doesn’t take itself too seriously, and goes along with the fun, lighthearted feel it gives. Watch it for its refreshing vibe and the cute charm of its main protagonist.