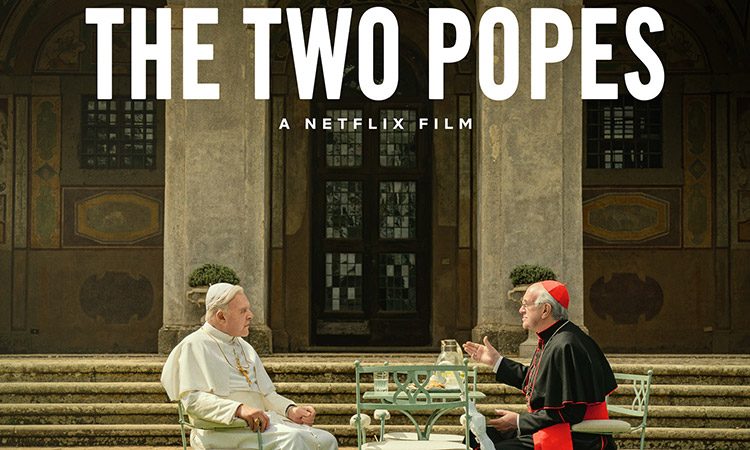 When the Catholic Church of the Vatican is embroiled in controversy, the reigning Pope, Benedict XVI (Anthony Hopkins) decides to take a drastic step. It is the kind of decision that is not made in many centuries. What is that and how Archbishop of Buenos Aires, Cardinal Jorge Mario Bergoglio (Jonathan Pryce) becomes a key piece in his plan is what the movie is all about? 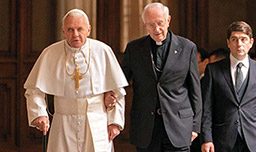 The film is all about two actors and there religious-political conversations. One of them is Sir Anthony Hopkins playing Pope Benedict XVI. He is a master craftsman when it comes to acting. It is once again at full display in The Two Popes.

Anthony Hopkins plays around the role as only he can. The small expressions and pauses conveying the emotions without too many dialogues, the many subtle changes in voice modulation, and so on are all there.

The bromance that Anthony Hopkins manages to create even at such an old age is a delight to watch. The powerful drama is an additional bonus, frankly.

Fernando Meirelles directs The Two Popes which is based on the book, Pope by Anthony McCarten. The story of the movie is simple when seen from a broader perspective. However, a lot is going on through the exchange of conversations.

So, the basic idea is that one is letting go off his position and offering it to another one, whom he deems fit. The problem is the other is not in agreement. There is an ideological difference even though, both follow the same religion. And that’s how with the introduction of a little context, a simple plot offers a lot of drama and content to engage.

Add, the fundamental differences and potential of insecurity; the whole plot begins to excite. The layered characters and their worldview are essential for the entire narrative. It brings the proceedings alive.

Right from the moment, Benedict XVI, and Bergoglio meet the story packs the punch that is required for the audience to engage. The difference between the two people and their worldview are neatly showcased. Some the back and forth banter between the two can be identifiable on a normal and personal level as well.

While the entire writing is steeped in religion, there are high numbers of moments that work just on the clash of the personality’s angle. Two Popes get into the outsiders vs insider, the right vs the left debate space and it automatically leads us to connect to either one of them.

The undercurrent emotional build-up is the real highlight of the movie. It is powerful, but it all happens through the words and performances of the lead actors. 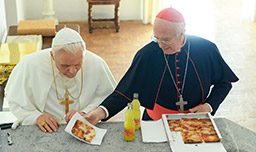 Yes, two-thirds into the narrative, The Two Popes gets a bit heavy regarding the content. The ‘core’ block involving Bergoglio’s past and his reluctance to accept the offer need some historical context to understand. The same is correct related to the dialogues that mark the beginning of the change of attitude. They involve some heavy and deep stuff. The ending after that is simple and neat.

Overall, The Two Popes is a classic example of powerful writing combining with great acting. All presented in a precise screenplay. It grabs our attention even with no crowd on the screen. The political, religious, and propaganda angle is the limiting aspect. If watching a solid drama is your priority irrespective of the core subject, then give The Two Popes a try. Others can stay away.

Jonathan Pryce also rises to the occasion and revels in the role that offers him a lot to chew on. All his scenes with Anthony Hopkins are a treat to watch. The arc involving the way the initial disdain between the two leads to bonding in the final, is well brought out.

Juan Minujin as younger Bergoglio is adequate. He presents the growing up stage and the mistakes that are made in an intense and understated manner. The rest of the actors appear in bits and pieces role, and they are alright.

Bryce Dessner provides beautiful music in sync with the proceedings. There are soulful choirs when necessary, and then parts are filled with rousing music. The balance is well maintained. The cinematography by Cesar Charlone is adequate. The editing by Fernando Stutz is crisp. The flow of the movie is smooth without any dragging. The writing is excellent.

Yes, but with reservation (only due to the religious angle)