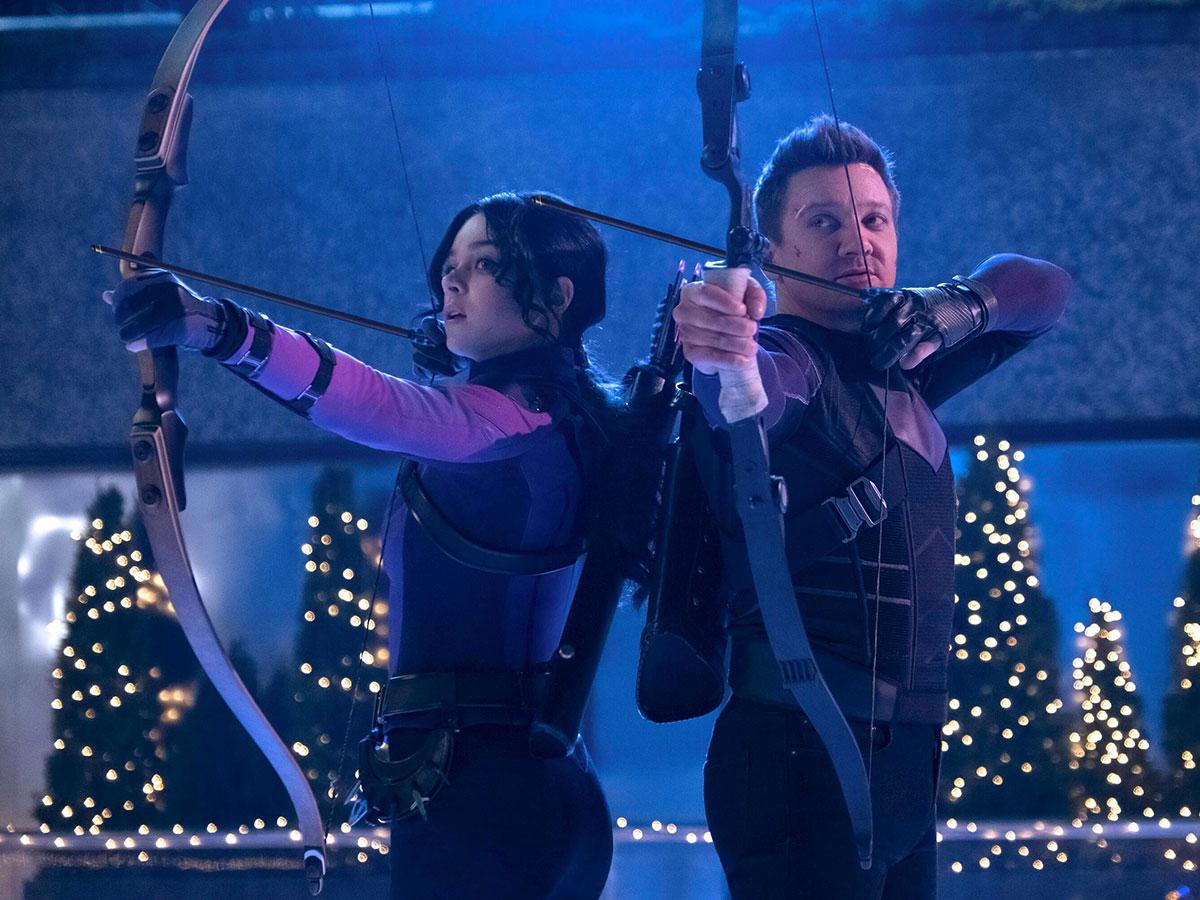 Finally! After a near 2-month break, Marvel has dropped the first two episodes of its next Phase 4 series, ‘Hawkeye’. And as expected, it ended on a freaking cliffhanger. We have to wait for another 7 days before we finally get some answers – and likely, another cliffhanger as well. Also, ‘Hawkeye’ is the first live-action MCU series to drop in the past four months – but it is also the fifth MCU series to have dropped in the span of a year. Whew! Still, Marvel being Marvel, has filled the two episodes with many blink-and-you-will-miss-it (and some not-so-subtle) Easter Eggs, call-backs and references, so there is a lot to unpack in this show already. For now, let us take a look at the 8 most important Easter Eggs, references and call backs from the season premiere and episode 2 that will likely be relevant in future MCU projects:

No Purple Logo
Surprisingly, this is not the first MCU TV series to not have a specialized “MARVEL STUDIOS” logo. ‘Loki’, ‘WandaVision’ and even the animated anthology series ‘What If…?’ all had specialized logos. We expected this series to have a purple logo, to match Hawkeye’s colour scheme – which didn’t happen. However, just like ‘The Falcon and The Winter Solider’, this web series also had the original red colour for the logo. Is this a clue we have been given to decipher?

Origin Story
Like most superheroes, Kate Bishop too has an origin story. Her dad dies during the battle for New York and she sees Hawkeye in action. And from then on, she started to emulate the Avenger. However, most of that is shown in the picturesque opening credits.

Callback To The ‘Avengers’
The first half of the season premiere focuses on the first ‘Avengers’. Kate Bishop’s calling, a musical called ‘Rogers’ which features ‘Ant-Man’ (pretty sure that will turn up in later projects) and of course Shawarma. Pretty sure, we are going to get a lot more ‘Avengers’ references, especially since we do not know what really happened to Kate’s father during the alien invasion.

Ronin!
Clint’s five-year stint as an assassin has come back to haunt him… and right when he was in New York too. Kate first meets Clint as Ronin in this web series, which is cool since Kate has met Clint in the comics as Ronin many times. It is the one mantle of Clint’s she never took up, in the comics, so it was interesting to see that change almost immediately.

The Duquesnes
Armand and “Jack” may seem like small players but they are actually pretty important characters from the Marvel comics. Actually, only an alternate version of Jack called Jacques is well known in the comic book series and he also has an alter-ego – The Swordsman. In the comics, Armand and Jacques are father and son, but here they are uncle and nephew. We expect Jack to play some important part in the series, since it looks like he might be involved in Armand’s death.

A Whole Lotta Villains
There has been a ridiculous number of villains introduced in just two episodes. They are as follows:
The Swordsman.
Kazimierz Kazimierczak AKA The Clown.
Tracksuit Mafia.
Ivan Banionis.
Echo.
While we do not know if The Swordsman is working with the others, we do know that the rest are working with each other. Kazimierz Kazimierczak, who is also called Kazi in the web series, is a primary Hawkeye villain called The Clown. The Tracksuit Mafia is called the Tracksuit Draculas in the comics, mainly for their attire and very white skin – which Kate notes. Ivan Banionis is a prominent member from this group, while Echo, a deaf villain, seems to be their ring leader. A pretty good ensemble cast of Marvel villains.

Pizza Dog!
Lucky AKA Arrow the golden retriever makes an appearance. In the comics, Arrow belonged to Ivan who constantly mistreated him. After Barton showed him some kindness, Arrow repaid it by attacking one of Ivan’s men. However, Ivan turned on his dog and he went on to lose his eye. After Clint nurses him back to health, Arrow gets renamed to Lucky. While we do not know how Arrow/Lucky loses his eye in this series, we know Kate and Clint have got their companion from the comics. It will be interesting to see how he will help push the series. Also, Arrow is also a huge fan of pizza. Win-win. Now, we need to know if either of the names, Arrow or Lucky, will turn up in the series.

Moira Brandon
While this character has only been mentioned a couple of times on the show, she is actually a Hollywood actress in the Marvel comic books. She is an actress in the MCU as well, which can be seen from the movie poster in her apartment titled ‘Creature of The Dark Galaxy’. In the comics, Hawkeye makes her an honorary Avenger. Hopefully we will see her in this MCU show.Follow us on Google News