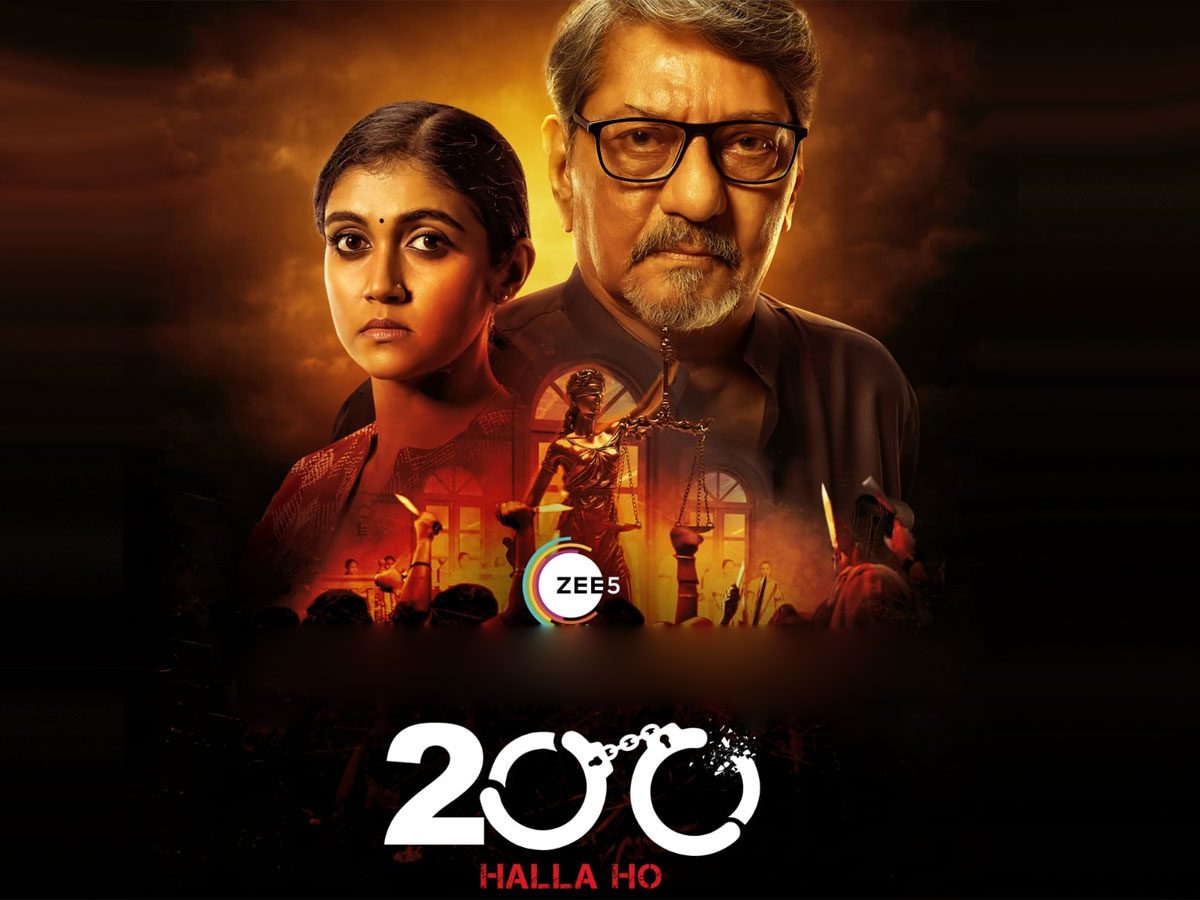 ZEE5 Original film ‘200 Halla Ho’ is a vigilante tale, set in the backdrop of a courtroom and social drama. The film is based on real-life incidents that occurred in 2004.

200 women storm a courtroom and lynch a criminal, Balli Chaudhary (Sahil Khattar), who’s been brought for his hearing. Denied justice despite filing cases against the serial sexual offender and having been terrorised for close to ten years by the dead man, the women—all dalit—have decided to avenge the wrongs in the most gruesome way possible. Five women are arrested for the lynching. Meanwhile, the Women’s Rights Cell sets up a fact-finding committee, led by retired judge Vithhal Daangle (Amol Palekar), to look into matter. A woman of the same slums, Asha Surve (Rinku Rajguru) bats for the women, along with righteous lawyer, Umesh Joshi (Barun Sobti).

200 Halla Ho is directed by Sarthak Dasgupta, and also written by him, along with his co-writers Abhijeeet Das, Soumyajit Roy and Gaurav Sharma. The film is produced by Yoodlee Films.

Amol Palekar, despite his prolonged and self-imposed absence from cinema, proves that his acting ability has lost none of its sharpness and deft touch. He holds the viewer’s attention effortlessly and effectively. Rinku Rajguru is impressive and impactful in the role of a dalit woman who’s decided she no longer wants to be the butt of discrimination based on her caste. Barun Sobti delivers a suitably understated performance as a lawyer who makes up for his glaring lack of chutzpah with endearing sincerity. He manages to catch the eye each time he appears on screen.

Saloni Batra, Upendra Limaye, Sushama Deshpande lend efficient support to the narrative. Sahil Khattar does a good job of conveying evil and menace in his role of Balli Chaudhary.

As mentioned before, 200 Halla Ho is based on real-life incidents that occurred in 2004 in Nagpur, Maharashtra. I remember being shocked by the incident when I read about it in the papers, all those years ago. Now, to see the entire thing play out before the eyes in 200 Halla Ho rekindles that shock, but with added impact. Sarthak Dasgupta does a good job of depicting the actual incident on screen. The narrative is compelling, but only by dint of its utter incredulity.

The film casts a harsh light on the blatant caste discrimination that is still prevalent even in urban areas of the country, let alone rural India. Along with it, 200 Halla Ho portrays the sheer vulnerability of women in Indian society. As Saloni Batra’s journalist character Purva says in one of the scenes, being a woman in India is a drawback; but being a dalit woman is a curse. It means you have no identity and no voice in the pecking order, meant to be abused and discarded at the will of the privileged caste, class, and yes, gender.

The elemental premise of 200 Halla Ho is compelling, no doubt. But Sarthak Dasgupta, along with his team of writers, makes a few fundamental mistakes that stand in the way of the film becoming outstanding from being merely compelling. The love angle between Asha and Umesh, for instance, dilutes the gravity of the proceedings somewhat. Squeezing in a song at a crucial point does likewise.

The political ambitions of the head of the Women’s Rights Commission WRC (played by Flora Saini) seem to be inserted into the narrative just to add extra drama. The courtroom scenes lack a certain edge-of-the-seat impact, leaving you kind of unmoved by it all. Lastly, the worst part—the dialogues of the film. The dialogues are clunky, cringey and unrealistic. They are the kind that are meant to be read in a book or essay, not spoken aloud in a film that aims to be realistic and hard-hitting.

To sum it up, 200 Halla Ho is a great attempt by the makers to bring the ugly truth of the Indian caste and gender system into the public eye. Ironing out the few crinkles in the script would have made a world of a difference.

The background score of the film by Prateek Nandan is engaging and elevating. Deep Metkar’s cinematography is very good. It lends a somber gravity to the story, imbuing it with an unsettling starkness.