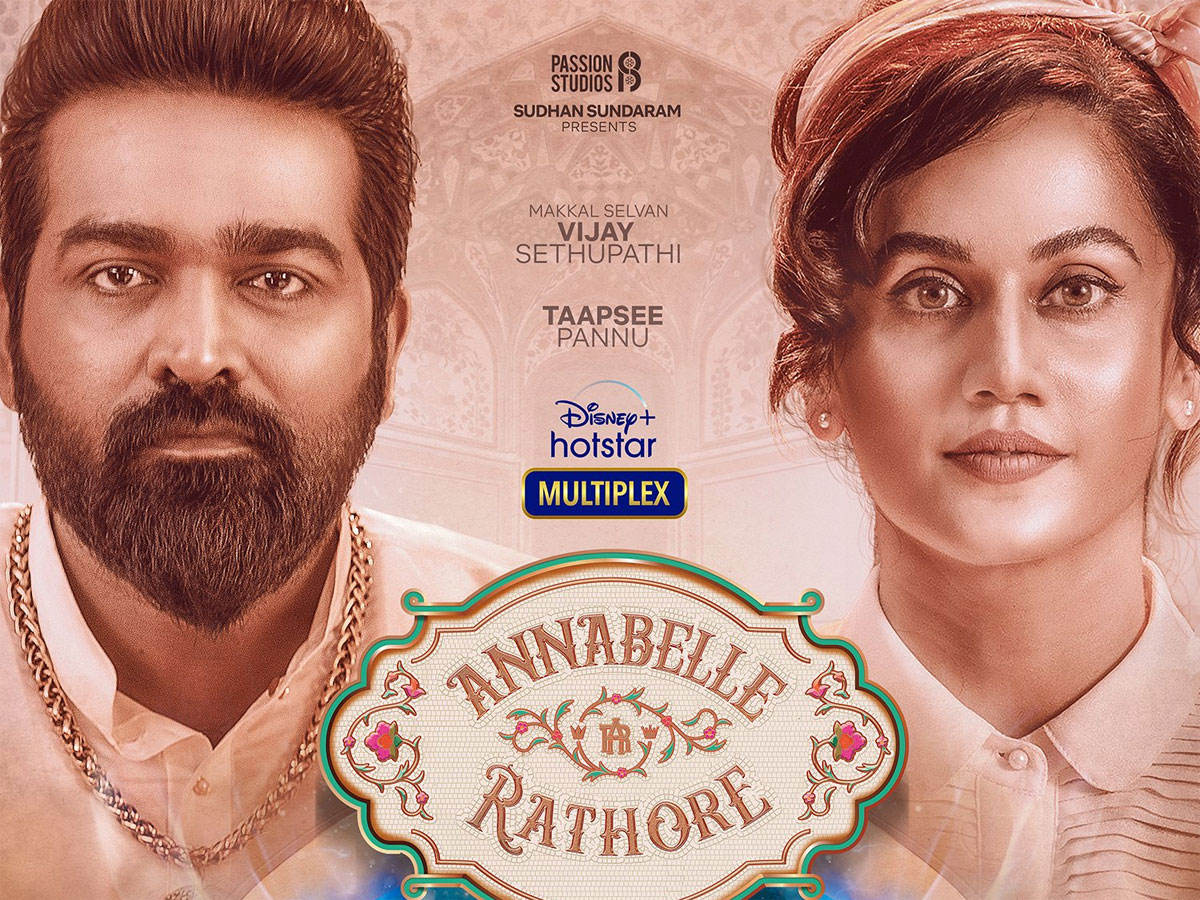 Skin N Swear: None. Quite a few nosebleeds though.

A group of thieves are “hired” to stay at a palace and clean up the place. When the thieves see the palace and its riches, their kleptomania goes into hyper drive and they hatch a plan to plunder the mansion. However there is a small problem – the palace has been haunted for decades. And what’s worse, the resident ghosts end up killing anyone who eats anything made inside the palace halls during the full moon. Will the thieves escape before the ghosts have a chance to poison them?

While the film leads are supposed to be Vijay Sethupathi and Taapsee Pannu; the former has one of the least screen times (when compared to the rest of the cast). Yogi Babu has more screen time than Vijay and possibly even Taapsee in Annabelle Sethupathi. Both film leads do a decent job with the script they are provided, but they are wasted in their roles. Yogi Babu is the only actor who does his job to the best of his ability – to provide us with laughs and he doesn’t disappoint.

Both Vijay and Taapsee don’t have much onscreen chemistry, but we can see their acting experience work in their favor in this movie. They manage to give us a good portrayal of two people who are in love, despite the lack of chemistry.

Annabelle Sethupathi has a decent overall premise and story. But the final execution of the film is quite bad. And one of the major reasons behind the film is the script. The writer-director of this film, Deepak Sundarrajan, does a bad job in penning the final screenplay and his execution is even worse. His direction may provide us with a few decent laughs and a few good entrance sequences, but it fails to make up for in substance.

While the film is supposed to be a horror comedy, the horror part becomes non-existent after the first 15 to 20 minutes into the movie. Deepak wanted to make a funny, fantastical film which is evident by the amount of comedy and humorous situations he has crammed into the movie. The writer-director has also added in multiple film references into the movie – which is surprising when shown for the first time, but then almost immediately forgotten.

And that is what ruins this film – the never ending humor. Even during important tension filled scenes and confrontation scenes. The chase scenes in the movie feels like they have come right out of a ‘Scooby Doo: Where are You’ episode. We understand the importance of keeping things light, but this movie takes it five steps too far.

While the acting of the film is not that great, we feel the reason for that is the actors are hampered by the script. Most of the supporting cast perform comedy (in the movie) and a lot of it lands quite well; however, the screenplay and the final direction of these actors makes the film almost unwatchable at times. The full circle moment at the end of this movie comes out of nowhere and is ridiculous.

The production set AKA the palace looks incredible though. The props as well as the clothes department have outdone themselves in this movie. The cinematography and music department does some good work as well.

Overall, Annabelle Sethupathi is a film that has too many forced humorous situations. Normally funny is a good thing, but this movie takes it to a level where it can’t be properly enjoyed. We are supposedly getting a sequel, but we ask Deepak to work on this film first before making another ridiculous affair.

Jagapathi Babu is the only other actor who has a bigger role when compared to the rest of the cast (not including Taapsee, Vijay and Yogi). However, his portrayal of the villainous Gajendra is poor at best. The character has mood swings worse than a person suffering from bipolar depression and it gets old real fast. Then again, the actor is hampered by the script so we will not hold it against him.

Supporting actors like Rajendra Prasad, Suneel, Jangiri Madhumitha and the rest deserve a mention for their dedication in making a scene funny.

While the direction and screenwriting portions of Annabelle Sethupathi are bad, the set & props and cinematography departments have done a good job. The music department has done good work as well, with the overall score of the film. The early jump scares work because of the music.

If you like watching mind-numbing humor and have time to kill, then this is your film.