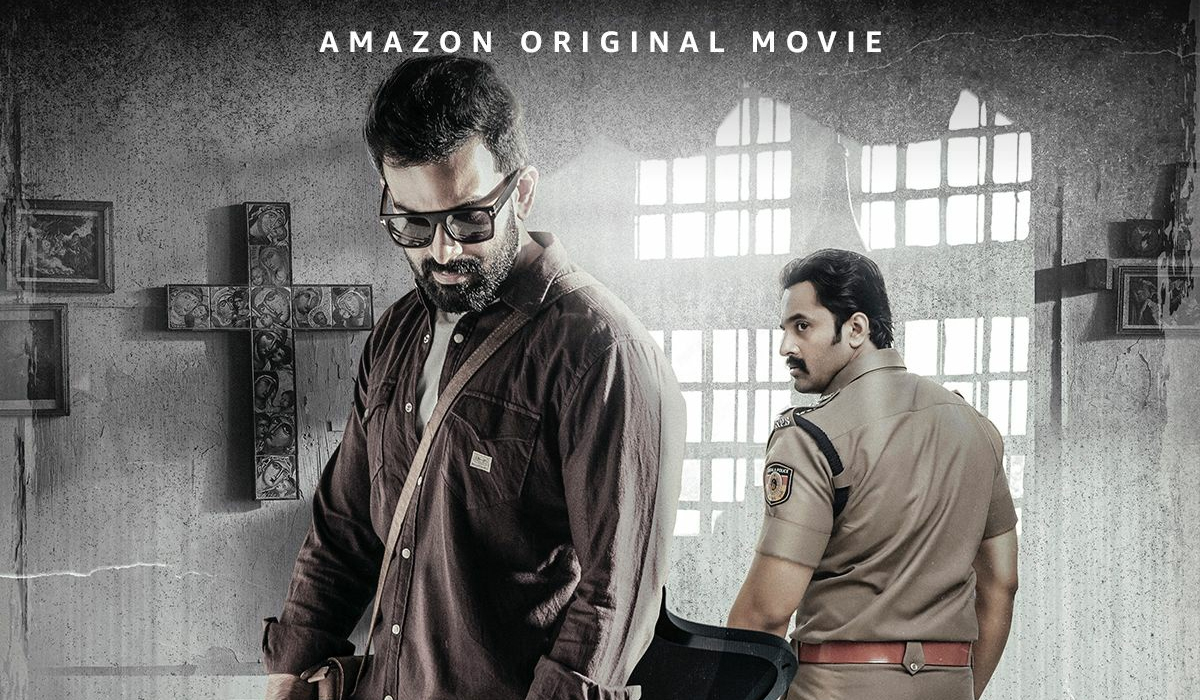 Ray Matthews (Prithviraj Sukumaran) is a blind guy who plays the piano for a living. He aims to save money and go to Europe and be an artist of repute. While he plays at Simon’s, an impressed yesteryear star Uday Kumar asks him to perform for his wedding anniversary. It is a surprise planned by him.

When Ray arrives at Uday’s flat, he is found murdered. Who is the murderer? How Ray sinks deep into a trap and comes out of it is the Bhramam‘s basic story.

Prithviraj Sukumaran is superb in the role of Ray Matthews. He does a believable act of a blind guy with a twist, first and with another twist later. There is a remarkable difference in both scenarios, which shows his involvement and expertise as an actor.

Leaving aside the blind act, he is terrific in all the key moments. The entire interval sequence and the one on one scenes with Simi’s character in the second half are some of those. Despite Ray’s predicament, he doesn’t look weak. A visible growth is seen in the role through the star’s act without his usual ‘confident smirk’. Overall, it is another fantastic turn for Prithviraj, who is on a roll selecting and entertaining the audience with versatile choices.

Renowned cinematographer Ravi K Chandran helms Brahmam. It is a remake of the Bollywood movie Andhadhun. Incidentally, another remake had recently been released in Telugu (directly on OTT) titled Maestro.

Bhramam tracks the journey of Ray, a blind pianist. The director takes time in building his world. The background of the church, his reason to stay at the place, and other details are neatly weaved into the narrative.

However, when it comes to the other main character, Simi, her scenes feel a little rushed initially. There is simultaneously an effort to cut down from the original and add something new. It is seen writing-wise, mainly related to character info. It fits nicely into the world that has been created here. These changes are not entirely superficial.

The movie settles into a groove when we get to the critical block of the birthday surprise. From then onwards, an engaging narrative is maintained until the interval sequence.

What predominantly works is the acting of Prithviraj and Mamta Mohandas showing some spunk. The two most crucial sequences are handled with care and acted with flair. Prithviraj is good, but Mamta Mohandas also does well to rise to the occasion. She gets into a comfort zone after the initial hurriedness. It doesn’t have the raw edge and unexpected thrill of the original, but it is solid on its own.

Things are on track post-intermission again, led by Prithviraj, who is at the centre of the whole thing. As mentioned previously, the visible growth of his character and the writing associated with it makes the second hour an entertaining watch. Ray becomes hero-like confidence-wise which turns the narrative into a commercial affair. Its change in tone could be problematic for a few, but it is alright.

Once again, the climax stretch is where the narrative is rushed. We feel that at the start and then at the end. A few moments are needlessly dragged. It is then tried to be compensated with abruptly cut scenes.  The smooth flow seen previously is missing. The ending (in Europe) is neatly done, though.

Overall, Bhramam is a well-made remake held together by terrific Prithviraj. Despite a shaky beginning and end, it is gripping everywhere else. It is a good watch if you have not seen the original and a decent one-time watch for Prithviraj if you have seen it.

Rashi Khanna playing the regular heroine role, looks lovely and acts decently within the screen time given to her. She is practically absent during the second hour.

It is Mamta Mohandas who gets the meaty part of Simi. Signs of nervous energy and trying to overdo to match the original are seen initially. But, she slowly gets into the rhythm and delivers until the intermission point. Unfortunately, the same tempo and imposing personality are missing in the second hour. Some trimming of the character moments also doesn’t help the cause.

Shankar as Uday Kumar is alright. Unni Mukundam nails the look of a physically imposing yet dimwit cop. He is a good choice. However, his role too lacks the impact and feels relegated to the background after a point. Jagadish, Ananya, Sminu Sijo, Aneesh Gopal and others are okay playing vital parts.

The music by Jakes Bejoy is good, and the background score is compelling throughout, adding to the mood. Ravi K Chandran, besides direction, also handles the cinematography. It is excellent. The editing by Sreekar Prasad is alright. Sarath Balan providing the dialogues, has done a neat job. Some conversations are improvised.

Gripping Narration (For The Most Part)

Too Cinematic Feel In Second Half