Home Reviews Breathe Into the Shadows Review – Gripping Entertainer That Plays On The...
Binged Rating6/10

BOTTOM LINE: Gripping Entertainer That Plays On The Shadows Of The Mind 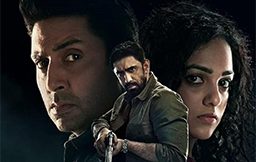 Breathe Into The Shadows is a psychological crime drama, centred on a distinguished psychiatrist, Avinash Sabharwal (Abhishek Bachchan), and his chef wife Abha (Nithya Menen), whose little daughter Siya (Ivana Kaur) is kidnapped. The distraught and helpless father is ready to go to any lengths to get his daughter back from the clutches of her deranged kidnapper; even commit brutal murders of seemingly unknown people at the bidding of the kidnapper – that’s the ransom the kidnapper demands. Hard-nosed police officer Kabir Sawant (Amit Sadh) gets on the case of the apparently unconnected murders, committed by a supposedly unhinged serial killer. But as the murders get murkier, Kabir digs deeper into their depths, and soon begins connecting the dots. That is when a chilling reality starts shaping up out of the mess – one that threatens to shatter the family and destroy the life of the Sabharwals.

Amit Sadh, as short-tempered, angst-ridden cop Kabir Sawant, is outstanding. He deploys every feature of his face to convey a wealth of emotions – his eyes speak his despair and sorrow for an unwittingly committed mistake that cost a young girl her ability to walk. His inscrutable expressions effectively shutter what’s going on in that razor sharp brain of his. And his dispassionate demeanour unsettles everyone in his vicinity – you can almost taste the tension in the air. Let alone the murderer, even the viewer is left sweating under the stress. For instance, the scene in which he grills Abha is unnerving to the core. It is a classy piece of acting by a consummate actor.

Abhishek Bachchan makes an impressive debut in the OTT space. The role he portrays is markedly out of his comfort zone – he’s mostly played the good guy in all of his outings. And that is exactly the reason why it’s even more compelling. Abhishek Bachchan has outdone himself in the role of Avinash Sabharwal – switching between the characters of lifesaving doctor and lifetaking killer with seamless ease. He does take a couple of episodes to settle down into character, but once he does, he owns it like nobody’s business. 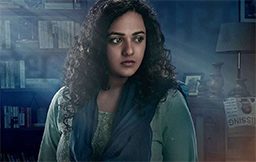 Nithya Menen is perfect in her characterisation of a kidnapped six-year old’s devastated mother. She portrays the duality of her role with aplomb — as fragile as she is after Siya’s disappearance, she’s firm in her resolve to do what it takes to get her back — to the extent of pushing a reluctant Avi to murder innocents. Saiyami Kher leaves an impact in her short but sharp role of a good-hearted hooker, as does Shruti Bapna. The latter deserves much better parts than what is offered to her now. Hers is an assured, measured performance. Hrishikesh Joshi, as Kabir Sawant’s sidekick Kamble, is well cast and eminently watchable, as he was in the original installment of Breathe.

Breathe Into The Shadows (BITS, in the review ahead) sidles into pristine territory – that of a relatively unknown, though real, psychological disorder. We’ve had countless serial killer movies and series in the Indian content space. But very few have delved into the shadowy storm capable of raging in the human mind, shrouded beneath an apparently calm and cool exterior. In that sense, BITS grabs attention and keeps you glued to your seat with the anticipation of what is to follow. Though it is an idea adapted from the seminal 1990s fictional work, Primal Fear, tweaked to Indian sensibilities, the novelty of the premise for desi audiences is indeed an advantage. How well BITS leverages that advantage? Well, read on-

The first edition of Breathe had revolved around a devout Christian taking to murdering innocents to save the life of his child. The second installment revisits a similar premise – but it is a reluctant murderer we have on our hands in Breathe Into The Shadows. The murders themselves don’t have too much suspense value. We are privvy to the planning that goes into them, and also the execution. It is the identity of the instigator of those murders that is the definitive twist in the tale. More than that, the chilling reality behind his outright evil. As it turns out, he’s not as evil as we perceive him to be within the first few episodes.

The opening sequence of Breathe Into The Shadows leaves you stunned; and immediately fills you with dread about the narrative to unfold. It is a smartly executed sequence – one of the best, we must say, in crime series territory. Alas, the rest of the series fails to live up to the impressive start. The first episode sets a good tempo, the next three drag. The next two episodes make up lost ground — that’s when the ‘great reveal’ happens — and you’re back into the series, invested, and eager to watch more. 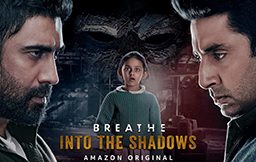 That’s pretty much how the entire series progresses – ebbing and flowing, rising and dipping, in turns. The narrative is riddled with ambiguities. Some of them are laughably foolish. Eagle-eyed Kabir Sawant misses clues that stare him in the face. Like the time he calls Avinash, who doesn’t answer his phone as he’s busy following his latest murder victim in Rajasthan; the service provider’s voice message comes on in Marwadi. Yet, when Avinash tells Kabir he is in his clinic, which incidentally is in Delhi, Kabir doesn’t catch the blatant lie. Even an amateur would have latched on to the obvious, but wonder of wonders, lofty, hawk-eyed Kabir Sawant doesn’t. In another instance, Kabir easily gets hold of twenty-year-old school library book-borrowing records – I doubt there’s any school library in India that holds onto those for twenty years.

A majorly irritating factor in the series is the constant spoon-feeding of information to us, as if the viewer is a kindergarten kid who needs to be pointed out everything or nudged into discovering things that must be unearthed. Information is even conveniently put into boxes – for us to read and glean. The Ravana trope is also flogged to death – the narrative repetitively harps on the ten vices – krodh (anger), kaam (lust), bhaya (fear), and so on. Each victim that the kidnapper orders Avinash to kill is slave to one of these vices – it’s as if he’s taken it upon himself to rid society of the many Ravanas hiding in its ample folds. Recent times have given sway to a new genre – crime stories rooted in Indian mythology and its crafty, convoluted tales.

An endearing element of BITS is the interaction between Saiyami Kher’s hooker character Shirley, and the antagonist. It is what tells us that he is not all evil, but a product of dire circumstances —essentially flawed, but still likeable. That’s when we root for him the most. The end, though, tells us the folly of our thinking – the villain of the piece takes on an even evil persona – and we don’t know what to make of it any more. The other tender relationship – that of Kabir Sawant, and the girl who lost the use of her legs because of his rashness, Meghna (Plabita Borthakur) is engaging too – neither too wishy-washy, nor too melodramatic.

One thing we liked was how Breathe Into The Shadows bats for women’s empowerment through several instances scattered across the narrative – they are not too subtle, but welcome, nevertheless.

The end hinges on a clever cliffhanger, paving the way for a Season 2, unlike Breathe, which had ended at the end of the last episode. All said and done, the series could have been kept tauter and crisper – twelve, almost-one-hour-long episodes is a bit much. Our filmmakers could certainly do well to polish up on the art of tighter storytelling.

Despite the obvious flaws, we find ourselves sucked into the storytelling. We even root for the antagonist at one point of time — not Avinash, but the one driving him to do evil. Breathe Into The Shadows is compelling enough to watch through to the end – if only to find out how it all ends. 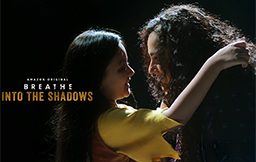 Director Mayank Sharma helms the series with a lenient hand – a tightly leashed narrative would have done a world of good to the direction, and hence the narrative. Writers Bhavani Iyer, Vikram Tuli and Mayank Sharma manage to weave a reasonably engaging story, flaws and weak links notwithstanding. Breathe Into The Shadows boasts of reasonably good cinematography, executed by S. Bharathwaaj. The music, by Alokanand Dasgupta and Karan Kulkarni, is eerie enough to set up a suspenseful ambience.

Breathe Into the Shadows Review by Binged Bureau