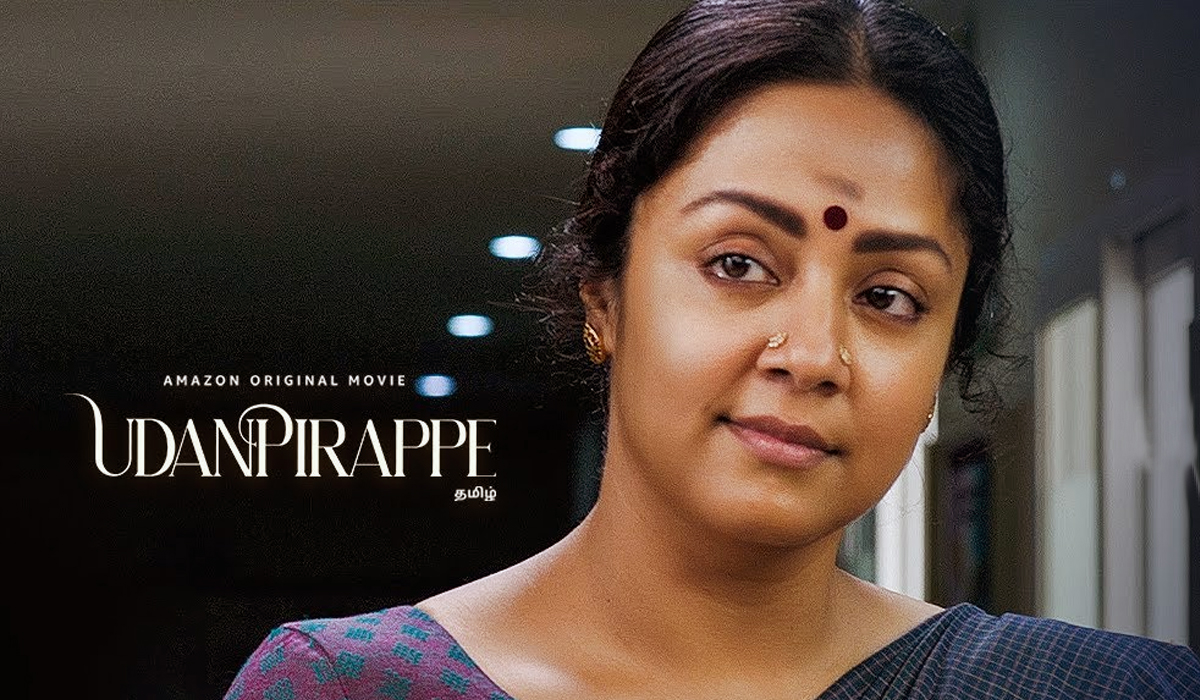 Skin N Swear: Some swearing and some implied skin.

Mathangi’s husband, Sargunam, and her brother, Vairavan do not speak to each other after an event that occurred in their past. But more importantly, they both fundamentally disagree on how justice should work. Sargunan believes in the law, while Vairavan believes in fighting for it. Even after decades, this rift between Mathangi’s loved ones does not shrink. Will Mathangi ever get to see their two families join hands together during her lifetime? Or will the pain drag on?

There are three main actors who appear for the most part in Udanpirappe – Jyotika, Samuthirakani and M. Sasikumar. All three actors do a decent job, with the script they are provided with – which sadly, isn’t all that great. Jyotika is in her element giving us a strong female role onscreen, Samuthirakani plays a diligent teacher and M. Sasikumar is very convincing as a rowdy. Sasikumar gets the most screen time (not by much), and while his heart of gold is a little too common, the actor does well to add his own nuances to the role.

Let’s give this out of the way, Udanpirappe is a very tough movie to watch. And it is not because of the non-existence of a plot in a 130+ minute feature film, or because of the amount of plot holes in the film; it is because of the amount of moral preaching the screenwriters drop on screen. And it is not two or three messages for the general public, as is norm in most Tamil movies these days (look at ‘Netrikann’, ‘Raame Aandalum Raavane Aandalum’, etc.); we get a different moral message every ten minutes – from start till the end of the film. And no, this is not an exaggeration.

Each moral message is unique… with many even contradicting each other. “Believe in the law” & “Grab justice with your own hands”, “Stick to your principles no matter what” & “Learn when to let go of your principles”, “Listen to your elders” & “Learn when to disobey”, etc. These contradicting messages create big enough plot holes and the moral messages add on to the “cringe factor” – making Udanpirappe even worse. The film becomes quite hard to watch after the first twenty minutes due to these reasons.

And this is not counting the aforementioned lack of a plot. While the rivalry of Sargunan and Vairavan is at the forefront of Udanpirappe, the main plotline only happens after the first half of the movie. And that too happens with another set of contradicting messages – “Marrying for love is right” & “Choosing to marry one’s cousin to unite a feuding family”. Mathangi’s daughter and nephew decide to marry to unite the two families. They fall in love during the courting (supposedly). Mathangi’s daughter gets attacked… for reasons. Her mother takes revenge (somehow). This is the entirety of the main plot which takes up about 30 minutes out of the 137 minutes runtime.

The only redeeming quality about this film is its music. And not just the background score, the main songs specifically. Each song is memorable and acts as a vehicle to push the plot further. In fact, the songs give us more information about the story of the film more than the actual film plot itself (slight exaggeration, but mostly true). Each song features a montage of clips that provides us with more plot points… which gets countered by plot holes down the line.

While plot holes are generally unavoidable in almost all films, blatant plot holes such as these can and should be avoided. Udanpirappe manages to cram in as many non-subtle plot holes as possible – that it makes one want to tear their hair out. During the scene where Mathangi lets her son die for her nephew – how does she actually survive? If it is because of her body’s strength, then taking her son up alongside her nephew wouldn’t have been hard. If it is because of the air in her lungs, then she shouldn’t have been able to reach that deep into the well in the first place. We can debate about all the possible ways she could have survived, but we figure that she could have saved her son as well, in pretty much every scenario.

Another big plot hole is when Mathangi decides to stick with her principles and continues to not speak to her brother even during the hospital/pregnancy incident. She tells her brother’s lackey to forget about principles when a life is in the balance, but she herself does not break her own principles (by calling her brother to send money) to save the life of the unborn child and mother. Luckily, there is a pawn shop right outside the hospital, which means Mathangi can pawn off her gold and give a lecture when people question her about it. Another big plot hole is the lack of interaction between Mathangi and her nephew. She is supposed to be very close to him, but they rarely appear on screen together; barely sharing two lines of dialogue in total, together. So, as you can see, the final screenplay plays a huge part in this disaster of a movie.

Overall, Udanpirappe is a movie worth skipping. Lack of a basic plot line, moral preaching and a ridiculous runtime makes this movie unbearable to watch. The cringe factor makes it even worse.

While artists like Kalaiyarasan, Soori and Sija Rose try to provide depth to the front three of this film, they are largely unsuccessful. Still, despite a bad script, these actors do make a good impression on the filmgoers of Udanpirappe, for they all portray memorable characters.

Music is the only good thing that comes out of Udanpirappe. D. Imman does a brilliant job behind the scenes and his work on this film will definitely be talked about for some time. The songs are quite brilliant and catchy and they perfectly carry the story of the film (as mentioned earlier).

Nope. Even if you are a Jyotika and Samuthirakani. You will likely end up losing respect for these actors.