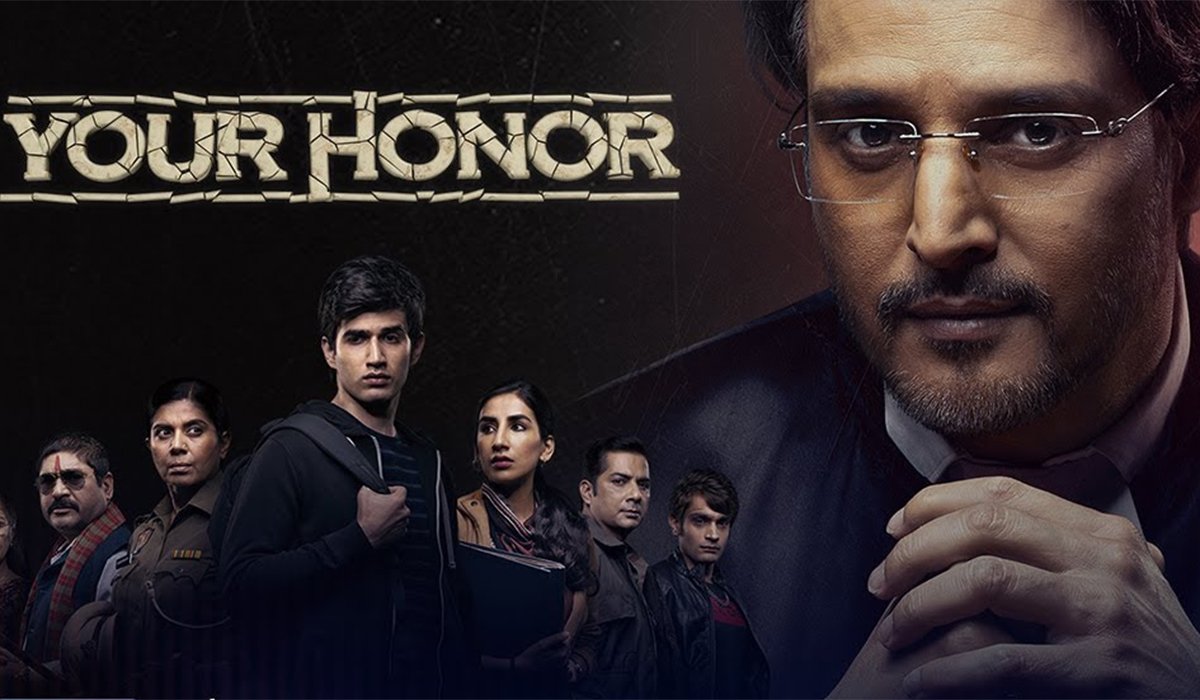 BOTTOM LINE:  A Satisfying Drama Despite Tiring And Overdrawn Feeling By The End

Bishan Khosla (Jimmy Shergill) is an honest court judge in Ludhiana, Punjab. He has a son Abeer Khosla, who is suffering from asthma induced panic attacks. One day Abeer comes home after a hit and run incident. The one affected by accident is the son of dreaded Punjabi don locally.

What happens when Bishan Khosla comes to know about it? What the extent he goes to save the life of his son is the basic plot of the series? Jimmy Shergill is fabulous in Your Honor. It could be said that it is a one-man show, but there are a couple of other actors who also come up with equally impressive performance.

Right from the beginning, Jimmy Shergill brings an intense and well-calculated act to the table. There is zero overacting, and everything is enacted in a brilliantly restrained and understated manner.

Jimmy shows the various gamut of expressions and is convincing in all of them. The aggression when dealing with co-judge, each lie he creates has him in a different variation, for example. It helps that the character is well written. The graph of the role is excellent, and Jimmy Shergill depicts it with aplomb.

E Niwas of Shool fame returns to direction after a considerably long gap. He seems to have found his mojo here. It doesn’t touch the highs of his debut but has enough going for it to make it a satisfying viewing. To the uninitiated, Your Honor is a remake of an Israeli series of the same name. It is about a local judge who is willing to go to any extent to save his only son. The story is simple, but the way the narrative is spun with twists and turns throughout is what makes it tick.

As is the case with any good viewing experience, we (as an audience) sense a gripping narrative within the first few minutes itself. We are drawn into the world and attracted towards the characters immediately.

The opening episode itself sets the ball rolling. From then onwards, there is a nonstop drama with thrills at regular intervals until the very end.

There are multiple tracks in Your Honor. The best is the one involving the lead character. Whenever he is on screen, something exciting or gripping is happening. The way his character behaves when put under different circumstances is the driving force of the narrative.

Similarly, the other tracks that engage are that of Kiran and Kaashi. Unlike Bishan, who gets going from the start, these two take time and get progressively better through the series. In some parts, they deliver the most engaging moments, as well. The other subplots involving Ruma, and Abeer are a mixed bag. The former stays average throughout threatening to explode and create a bang at some time. However, nothing of that sorts happen. With Abeer, his ending has a nice punch, but until then his is the most dragging portions of the entire series.

The gangster clashes and the rivalries are the most routine and ordinary bits in the entire show. They are, however, the necessary fillers to give other characters the space to operate and make the choices.

The series as a whole starts well. It remains strong until somewhere in the middle, but loses momentum and feels rushed towards the end. The consistent acting makes the narrative click even when there is a visible shift in proceedings.

Overall, Your Honor has enough of engaging content to warrant an easy one time watch. The solid performances add to the appeal. Give it a try with a little bit of patience.

The series has some power-packed performances besides the lead. The first name that comes to the mind is Mita Vashisht. She starts slowly and almost seems instantly disappearing. But, as the show progresses, she grows from strength to strength. Hers is the most visible character growth so much so that she starts to scream during the final stretch. Barring some of those shrieking moments, Mita Vashisht has done superbly.

The second name is Varun Badola. He holds his own in the middle parts. Again, the character arc is excellently developed and enacted. Among the rest, Yashpal Sharma has instant recall value. He does nothing unusual, but whenever he is around, it makes one glued to it. Parul Gulati could have done better with the material given to her. The same is the case with Pulkit Makol playing Abeer. He gets on the nerves at times. The remaining characters too have something to chew on and a few of them Richa Pallod, Suhasini Mulay, Parag and Bikramjit Kanwarpal shine. The background score is a bit dull compared to the high drama the narrative offers. The cinematography is alright. The editing could have been a little bit tighter in the middle portions. The writing is decent when seen on the whole.

A Couple Of Tracks Drag

Rushed Towards The End