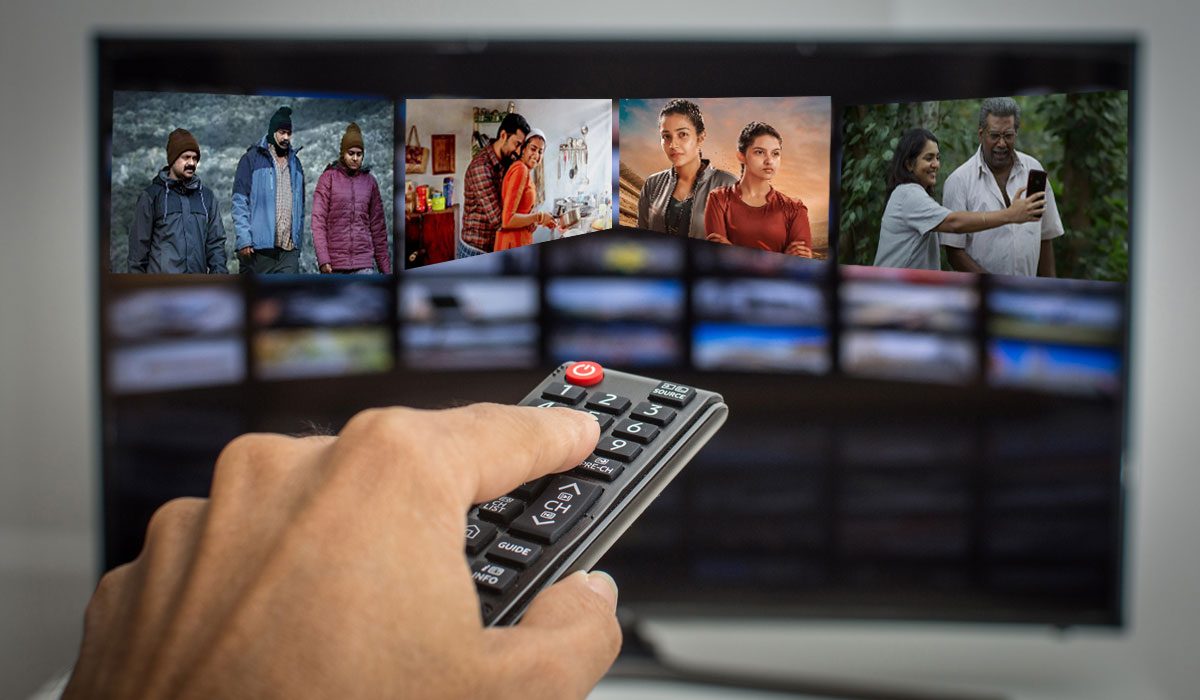 With the State-wide lockdown in Kerala extending by a few days, to June 16th 2021, the chance of watching a Malayalam film in a Kerala theatre this month (and the next month as well, looking at how things stand) is gradually reaching 0 percent. Theatres within the state closed almost a week before the lockdown (indefinitely) and nearly every movie which was running in the cinema halls have now opted for an OTT release. ‘Nayattu’, ‘Nizhal’, ‘Aarkkariyam’ and ‘Chathur Mukham’ among others were the main films running in the theatres just before the theatres shut down, back in April. The filmmakers behind the aforementioned films decided to opt for digital release; what’s more, they have decided to release these films on multiple streaming platforms. And these are not the only Malayalam films to do so.

‘The Great Indian Kitchen’ – one of the most talked about Malayalam films of 2021, made itself available for viewing for the first time on the OTT platform, Neestream. Since then, the movie has been streaming on Amazon Prime Video, Cinemapreneur, FilMe, GudSho, Saina Play, Limelight Media, Roots and Cave. And we expect this list to grow by the end of this year, due to its immense popularity. Another major multi-OTT release in Mollywood was ‘Aarkkariyam’, which was quite recent. This mystery drama film was running in theatres for a week, before it had to be removed due to the lack of viewers. The film has now made itself available on eight platforms – Neestream, Cave, Roots, Amazon Prime Video, FilMe, First Shows, BookMyShow and Koode.

With the interest generated by the Malayalam Film Industry being quite high, especially among the South Indian OTT subscribers – most of these regional and small-scale OTT platforms are willing to take these Malayalam films on to their streaming platform, even at the cost of giving up exclusive streaming rights for said films. Even OTT giants like Amazon Prime Video and Netflix have been forced to accept the terms made by the Malayalam filmmakers behind films like ‘Nayattu’, ‘Kho Kho’ and ‘Kala’ – making it a “win” for the artists.

With OTT streaming contracts being generally unfavorable to the filmmakers due to its pay-per-minute-viewing system, these Malayalam filmmakers have decided to do the smart thing and opt for a multi-OTT release, which will increase the film’s availability and popularity. ‘Aarkaraiyam’ has managed to get over 6 lakh views in a few weeks and those views will surely improve as the film drops on TV this weekend. This new system will definitely attract more and more Malayalam films – and we believe this should be the tipping point which should decide the fate of Prithviraj’s ‘Cold Case’ and Fahadh Faasil’s ‘Malik’. We wouldn’t be surprised if Dulquer Salman’s highly anticipated crime thriller ‘Kurup’ goes for an OTT release as well, after checking out this brilliant business model.