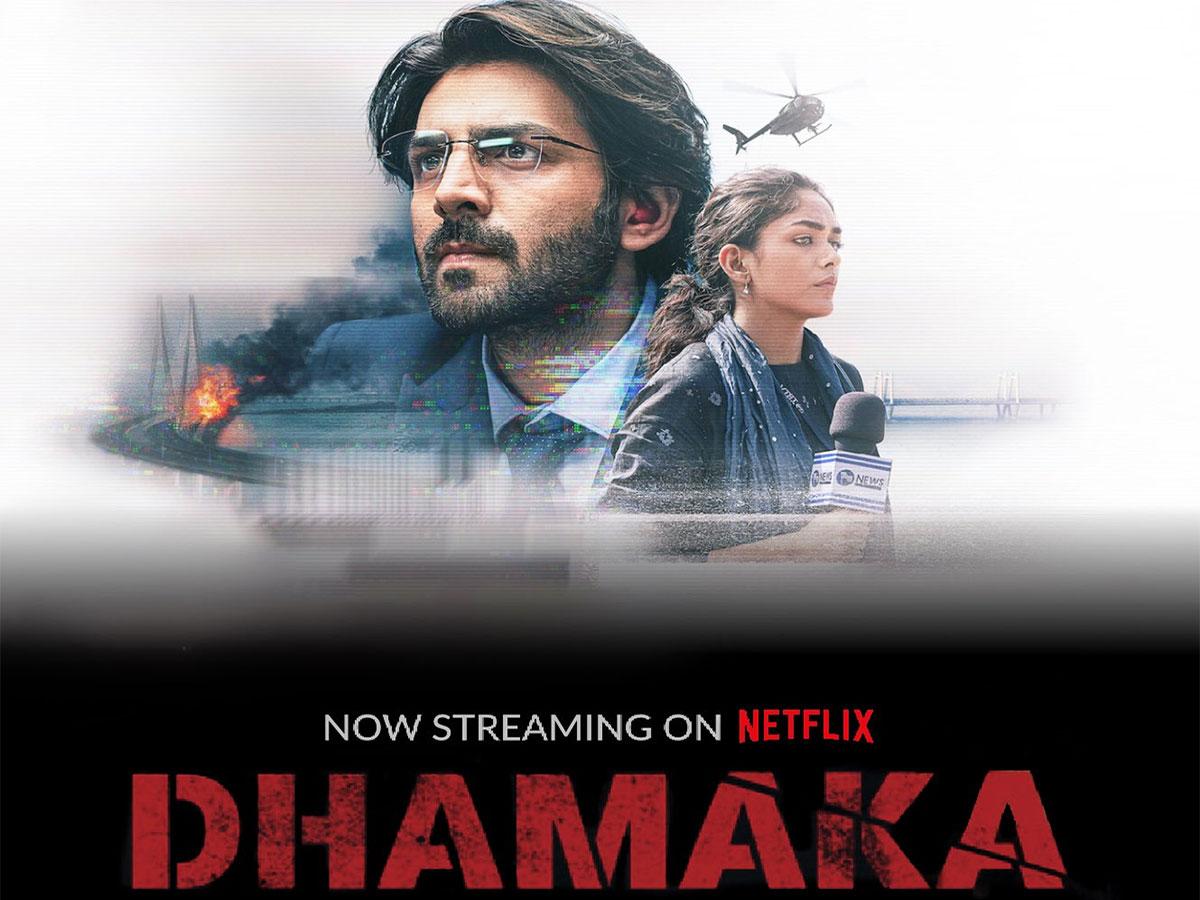 BOTTOM LINE: An Exciting Idea That Delivers Only In Small Bits

Former prime-time news anchor TRTV Bharosa 24*7, and now a Radio Jockey, Arjun Pathak (Karthik Aaryan), gets an anonymous call threatening blast of Mumbai Sea Link bridge. He is forced to take his words seriously when an explosion takes place after his rejection.

Who is Raghubeer Mhata (Soham Majumdar)? Why is he threatening bomb blasts on the bridge? Among all the anchors, why is Arjun Pathak picked comprises of the movie’s basic plot.

Dhamaka is, without any doubt, the most serious work done by Karthik Aaryan. It is far off from his typical lover boy roles in rom-com space. It is also partly the reason why Karthik Aaryan is not taken seriously as an actor. The part of Arjun Pathak is like a welcome and much-needed break for him.

Karthik Aaryan has done decently playing a serious dramatic part. It is his energetic bits that stand out here as well instead of the intensely done drama. He is okay in those parts. He tries hard but can’t get the required intensity with a transformative pain towards the end.

Ram Madhvani directs Dhamaka. It is a drama-thriller set in the world of TRP and Breaking News hungry media. Much like the director’s previous work, Arya, this too is adapted from a foreign source. In Dhamaka’s case, it is a Korean movie, The Terror Live.

Dhamaka begins intriguingly with the call of an ordinary man. He makes a compelling case for his vindictive act that amounts to terrorism. The way Arjun Pathak latches onto it to get back to the top is all well done. The proceedings make one intrigued to what happens next.

What starts as the plight of the commoner soon is taken over by the greedy media angle. It is shown that the media will go to any extent to extract the TRP’s. It is something that we have seen many times before and offers nothing new.

The perspective from an anchor is fine, but it also treads a predictable line. Amidst all these, a common man holding everyone for ransom, aspect is what makes things gripping. It is akin in spirit to A Wednesday.

The apology (by Minister) track works as long as it’s between the Raghubeer and Arjun. Their conversation is the key to the whole proceedings. The complications arrive when others come in between. The whole thing does generate gripping drama, in parts, during the first hour.

However, as the narrative progresses, it tilts more towards the media and journalism side. There are neat twists within a predictable space, but one senses things going out of control, literally.

During the pre-climax and climax, the drama goes over the top and loud. It turns into a clichéd soap opera type with the various twists and actions done by different characters. The underlying theme that no one is above the system is fine, but its execution creates a messy feeling. The climax comes across as downright cringe.

Overall, Dhamaka has an exciting premise. It begins well and stays on course until it falls apart towards the final. It is still a decent watch for the neat execution, slick making and writing. But, don’t have too high hopes keeping the director’s previous flicks in mind.

While many faces are seen throughout the narrative, only a few have notable parts. The key among them are Soham Majumdar, Amruta Subhash, and Vikas Kumar.

Soham appears only briefly but is mightily impressive with his voice. The pain and angst of a common man are poignantly and chillingly conveyed. Amruta Subhash, as a cold-hearted, TRP hungry boss, is alright. Vikas Kumar is adequate and helps in keeping the momentum going intermittently with his presence.

Vishal Khurana provides the music and the background score for the movie. The BGM is superb, and it helps a lot in escalating the tense mood. Manu Anand’s cinematography adds to the score with a gritty and dark tone. The editing by Monisha Baldawa and Amit Karia is okay. The dialogues by Puneet Sharma and Ram Madhvani are good. They are instrumental in engaging the audience from the start.