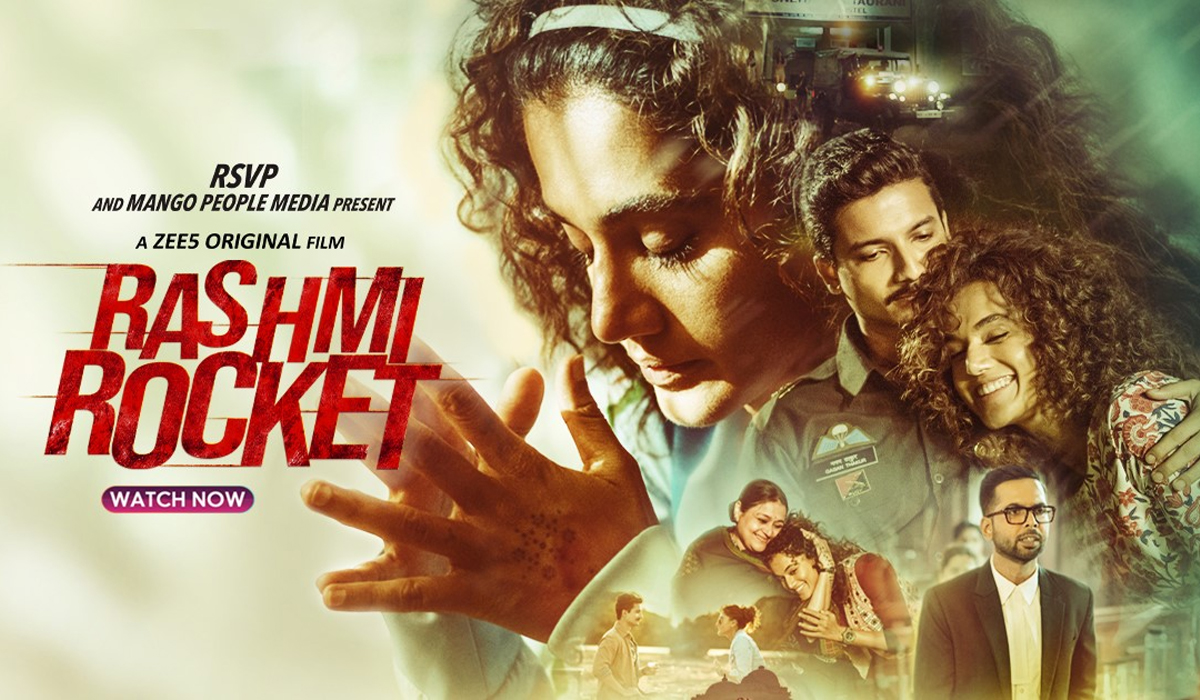 Rashmi is affectionately called Rashmi Rocket for her immense pace, from a very young age. However a traumatic incident causes her to quit racing. She grows up and decides to be a tour guide, just like her father, before she catches the eye of an army track-and-field trainer, Captain Gagan Thakur. Gagan wants her to race at the State trials which take place in Gandhinagar, but Rashmi refuses. Will Gagan be able to convince her to race? Even if she accepts, will racing truly help her achieve greatness?

Rashmi Rocket has many good on screen performances. Priyanshu Painyuli’s performance as Captain Gagan Thakur, the patient motivator/friend turned boyfriend/husband is underrated, but necessary for this film. Abhishek Banerjee gives us a decent performance as the idealistic, yet highly emotional lawyer. However, Taapsee Pannu’s role as the titular character of Rocket Rashmi takes the cake. While the actress is hampered by the script in several scenes, she manages to produce an unbelievable performance and is the main driving force of this film. Supriya Pathak as Bhanuben also deserves a special mention as well.

Like most Indian movies that have been coming out in the past few years – Rashmi Rocket is a film that talks about an issue which is faced by a small section of our community. In this feature film, the issue we talk about is the discrimination due to blood testosterone levels, while the “small section” part refers to women athletes around the world. We follow Rashmi, a fast young woman from Gujarat, who wins multiple medals for India. But due to high levels of testosterone found in her blood, she loses her status as a woman athlete and is banned from being able to compete internationally or to represent her country. To earn back her right to represent her country, Rashmi decides to take the Indian Athletics Association to court for violating her basic human rights.

And this sounds good, right? And even if it does, most films like this are quite preachy and unbearable to watch. Rocket Rashmi is still preachy, but with a good film lead, the movie is nowhere near “unbearable”. The final message is not shoved down our throats (unlike a few of the recent Indian releases), while Taapsee Pannu is the perfect cast for this role. For assembling a good final cast together, this films’ casting director also deserves some praise.

Still, the movie has a few issues of its own. While Rashmi Rocket makes fun of its own drawbacks when the judge makes fun of Eeshit for being overly dramatic in the courtroom, the second half of the film is still filled with these dramatic, unrealistic moments. While Abhishek Banerjee does a good job with the final script, the final court scene feels a bit too unrealistic.

Plus there are small plot holes in the film as well. One example would be that Taapsee Pannu’s character gets over her life-altering childhood trauma after one talk with Major Gagan Thakur (and her mother). Also, the fact that a male cop that slapped a woman gets to escape repercussions, even in 2014 is ludicrous – and that is what would have happened, had Eeshit not managed to push this case forward to trial. And the funny thing is, the cop getting away with the slap is more likely to happen than a positive court verdict going in favour of our protagonist.

Also, the overall film is quite predictable. While the final court verdict and Rashmi representing India while being pregnant is unexpected – the rest of the film could have been guessed from the very start of Rashmi Rocket. And that needs to change for the sports drama genre to grow. Still, the formula hasn’t strayed us wrong yet – and it hasn’t done the same to Rashmi Rocket either.

There are a few other elements worth mentioning about Rashmi Rocket. Vaidehi’s quick friendship with Rashmi doesn’t make sense at first glance, but if you look back at one of the earlier races which feature Rashmi – you can actually see Vaidehi, who is participating in another event during the same, cheering for Rashmi when she wins. This shows some proper continuity. Another element is regarding Coach Tejas Mukherji’s change of heart. While these things are usually forced in most films, this change of heart is done through pure logic from Eeshit’s part (before he kind of ruins his point with the Sachin joke) and the scriptwriter deserves credit for that. There are many other small parts in the film (like these) which manage to keep this film from dragging and make it a good watch.

Overall, Rashmi Rocket is a good one-time watch. The film educates the public about a major issue that is currently plaguing female athletes around the world – while not shoving moral messages down one’s throat. While the preaching is still present, Taapsee Pannu soon makes us forget about it with a good onscreen performance.

Many of the supporting cast deserves a mention. Child artist, Chahat Tewani, deserves a mention for her role as the younger Rashmi. While she doesn’t get much screen time, she manages to shine through every minute. Mantra as Coach Tejas Mukherjee and Miloni Jhonsa as Niharika Namita both have screen presence even with limited roles. Their slightly antagonistic roles give Rashmi Rocket a little bit more depth and make it more watchable. Varun Badola plays a decent controversial figure onscreen as well.

Music, cinematography and final script are all good. While the last one among the three has some problems (a little bit of over-preachiness) – the end product is still something worth checking out. The director, Akarsh Khurana, and his editing department have done a good job as well.

It is a decent one time watch, so check it out.